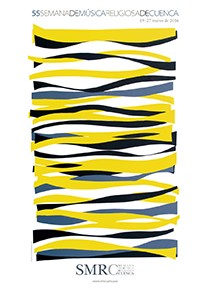 Religious Music Week in Cuenca presented today at the Goethe Institute Madrid, his 55 edition with Germany as guest country. This new appointment Sacral European benchmark festival will take place between 19 and the 27 next March in the city castellanomanchega, with the Vocalconsort Berlin as resident artist and a special tribute to Sebastian Duron Y Miguel de Cervantes, including sixteen concerts, courses and seminars such as those under the title “Jornadas Cervantinas · Música y Literatura”.

One of the essential appointments of the 55th edition will be Bach's Mass in B minor –whose score has been declared, Recently, UNESCO heritage - interpreted by William Christie Y Les Arts Florissants the day 24 March at the Auditorium Theater of Cuenca.

Regarding another key theme of this year - the fourth centenary of the death of Miguel de Cervantes–, in addition to five conferences among which those of experts such as Javier Gomá, Juan Ruiz Jimenez, Emilio Pascual, José María Ribagorda O Ignacio Amestoy, SMRC joins the events with- memorable events with a concert in which the spiritual Villanescas of Francisco Guerrero and mounting, in coproduction with old Escena, from The Conquest of Jerusalem.

The space dedicated to the guest country will have 7 concerts. further, two works will be released within the framework of the Festival: Lamentation de James Wood y Breathing of the young composer Hector Parra, a piece commissioned by the SRMC with text from Jaume Plensa for the celebration of the IV Centenary of the Camino del Calvario Procession.

it 2016, Religious Music Week begins on 19 March with a monograph dedicated to Vivaldi a cargo of just blues, under the direction of Federico Maria Sardelli and the collaboration of the soprano Roberta Mameli. This versatile director is also the author of a novel about Antonio Vivaldi that will soon appear in Spain..

Since Sunday 20 from March to Saturday 26, the SMRC will have the participation of various artists of German origin. Among them the Vocalconsort Berlin, resident artist, who will be in charge of the two premieres prepared for this year: Lamentations of James Wood, and Breathing by Héctor Parra.

This year 2016 starts with an inexcusable date: Cervantes, on the fourth centenary of his death. Likewise, Duron, Weckmann and Froberger will be present at the 55 edition. The Christian Rieger concert at the Capilla del Espíritu Santo in Cuenca will be the first live listening of the organ in its original location, after a cleaning and restoration process. Two programs will be dedicated to Durón. One, the closing one, in vernacular, and another dedicated to the Lamentations and songs of Holy Week in Latin.

Regarding Miguel Cervantes, in addition to the conferences, SMRC joins the events with- memorable events with a concert in which the spiritual villains of Francisco Guerrero and with the assembly, in coproduction with old Escena, from The Conquest of Jerusalem, quite a challenge for the SMRC.

MUSIC AND LITERATURE, Conference at the UIMP

2016 It links all of us who are part of the world of culture to characters of the relevance of Cervantes and Shakespeare. Our focus of interest focuses on Cervantes through three days in which music will be present, theater, writing, etc. These conferences will be held thanks to the collaboration and patronage of the Menéndez Pelayo International University (UIMP).

We intend to transport attendees to the Cervantes sound world, to his theater and his thoughts- I lie. Also to his world on paper, to “Blank sheet” and everything that gives rise to writing. The lecturers in charge of addressing these issues are people of recognized prestige.- gio. Our interest is focused on making these Conference help to understand a little more this great idealist, key in our culture.

From the standpoint of musical and liturgical, the songs of Holy Week constitute one of the pillars of the composition of the Gregorian repertoire. In this days, the liturgy preserves the most archaic forms together with the most evolved, the formal musically simpler, with innovative, always yes, within the sobriety of the monodic song that characterizes the Church. The course, organized by the 55 edition of the Cuenca Religious Music Week and by the Hispanic Association for the Study of Gregorian Song (AHisECGre), will address these genres for both the general public and scholars and experts in the field. Ana Hernandez will hold a diction and interpretation workshop, Golden age, Century of Choir with members of the Escolanía de San Agustín. This workshop will conclude on Sunday 13 of March, with a sample of the work done, in the Church of the Savior.

For the design of this edition, we have the valuable collaboration of different institutions to which we thank for their support.. On the one hand with Vocalconsort, resident artist, we established an agreement for the co-production of SOS: Songs of Suffering, which includes the premiere in Spain of the work of James Wood. Likewise, We start from a co-production with Antiqua Scene to set up The Conquest of Jerusalem, by Miguel de Cervantes. The DKV Integralia Foundation, Besides, sponsors the performance of Andrea Zamora placeholder image.

By last, we must not forget the importance of the marvelous spaces that Cuenca offers, World Heritage city, and that serve as natural settings for each of the scheduled activities. Many of them add their architectural beauty to an intense religious spirit. The acts will be held in the Cathedral, at the Auditorium Theater, in the Church of San Miguel, in that of Our Lady of Light, that of the Savior, the Church of Arcas, that of San Pedro, La de la Merced and in the Torner Space. There will also be the Church of Our Lady of the Assumption, of Tarancón, whose magnificent altarpiece has recently been restored, and with the Treasure Museum of the Cathedral of Cuenca.