“Written on skin”, George Benjamin, at the Theatre Royal 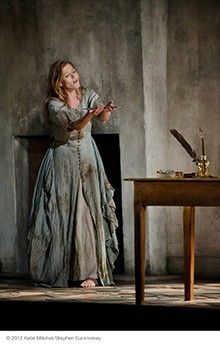 The opera Written on skin part of the grisly legend Provencal glossed by Boccaccio in the Decameron, where the adulterous woman troubadour Guillem de Cabestany is induced to eat, without knowing it, the heart of her lover.

The plot, in which live feelings, drives and gender-violence extreme actions, despotism, treason, eroticism, revenge, murder, anthropophagy-, It takes place in a double temporal and discursive framework, in which the current characters glossed the archetypes of medieval story, crossing time.

Barbara Hannigan, soprano and conductor for which the composer wrote the role of Agnès, will lead the cast in Madrid, along with Christopher Purves, which he premiered with her demanding role Protector.

The semi-staged version will be at Real, directed by Benjamin Davis, It is based on the magnificent production conceived by Katie Mitchell for the world premiere of the opera at the Festival Aix en Provence in 2012.

The composer George Benjamin will be responsible for directing his work as head of the prestigious Mahler Chamber Orchestra.

He 15 of March, to 20.15 hours, Luis Gago give a lecture on Written on Skin, in the cycle approaches.

One of the peak moments of this season will be, definitely, the presentation in semi-staged version of the opera Written on Skin (Written on Skin) British composer George Benjamin (London, 1960), since its world premiere at 2012 It has been presented in several theaters in Europe and the United States to rave reviews and sold out, calling into question the divorce between the public and the actual lyrical creation.

The secret of this success lies, maybe, in the almost organic link between the disturbing text of the English playwright Martin Crimp(Dartford, 1956) and the music of George Benjamin, that seems to emanate from the words and the powerful dramatic fabric of the work, flowing with clarity and cohesion from the most evanescent sonorities, Hypnotic or sensual; the scariest, phantasmagoric and visceral, always keeping the beat and unrest throbbing behind the plot.

Starting from the brutal Provencal legend ate heart, the male lead (Protector, baritone) It is a despot, egomaniac and batterer who hires a young illuminator of manuscripts (Boy, countertenor) glose for his life and deeds on parchment (one of the meanings of Skin, in the title). His submissive and silent wife (Agnès, soprano) persuades the young for the show as it is in his narrative, acquiring life and voice throughout the book, to discover their thoughts, emotions, instincts and succumb to the fatal attraction it exerts on the mancebo.

Upset by hatred and spite, the murder Protector young lover, you coring and serves it to his wife, after tasting commits suicide, without his executioner can kill and satisfy so, truly, his vindictiveness.

The protagonist trio join two other characters: Marie (mezzo soprano), Sister Agnès, and her husband, John (tenor), which they are transformed into angels or Commentators, literally through the passage of time, in an opera that permanently moves from the darkness of the Middle Ages to the present world, as if the first was a terrible metaphor of the second.

A) Yes, behind the brutality of the legend fierce criticism so hot and sensitive issues today as gender violence lurks, oppression, the ignorance, la propaganda o la megalomanía; and also a deep cross reflections on the search for identity, eroticism, The insecurity, animal instincts and many issues of today and always that intermingle in such an intense plot as disturbing.

But it is the music of George Benjamin which designs and multiplies the emotional significance of the drama with a devilish and personalized vocal writing-the composer wrote the score dialogue and experimenting with interpreters, never gratuitous or sensationalist an orchestration of rich harmonic spectrum and timbral effects (deserves special mention the characteristic sound of the glass harmonica and viola da gamba included in certain scenes), always at the service of dramaturgy. The music develops over an hour and forty minutes with surprising moments of reverie, furor, suspense, ecstasy, Rage, or sensuality, without ever decay dramatic tension.

The fact that a current opera with such dramatic and musical complexity generate consensus among critics and exhaust minority locations outside the circuit of contemporary creation, impels reflection and justifies the presentation ofWritten on Skin in Barcelona and Madrid as part of a tour that will feature the composer, the Mahler Chamber Orchestra,the duo protagonist who premiered the opera soprano -the Barbara Hannigan and bass-baritone Christopher Purves (Walt Disney was in the world premiere of The Perfect American, de Philip Glass, Real)-, countertenor Tim Mead (first angel / Boy), mezzosoprano Victoria Simmonds (second angel / Marie) and tenor Robert Murray (third angel / John).

To provide the public key to a deeper understanding of the opera by George Benjamin, Luis Gago will offer aconference on Written on Skin the next Tuesday, 15 of March, to 20.15 hours (two days before the premiere of the opera) in the Sala Gayarre Teatro Real, in the cycle approaches.

The next day, he Wednesday, 16 of March, to 19.30 hours will take place in the hall of the Juan March Foundationa recital with pianist Tamara Stefanovich, performing works by George Benjamin and his master Olivier Messiaenfree entry under the cycle classroom (Re)premieres.