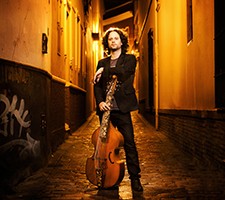 XVII Music Festival of Ubeda and Baeza
the Retreat J. Obregon, which takes its name from a famous Boccherini quintet, In a short time, it has established itself as an unavoidable reference in the panorama of early music thanks to its musical quality and the originality of its proposals.. and not by chance, many of its programs incorporate pieces by the Italian master and his compatriot Brunetti. In addition to the set of variations on Ritirata itself, they present us in absolute preview one of the ambitious quartets of Brunetti, accompanied by two Spanish quintets for guitar and strings by Boccherini.

As a natural complement to the previous concert, this show focuses on the string quartet's immediate predecessor, trio for two violins and bass, genre to which Brunetti and Boccherini (along with other Spanish composers such as José Castel, Jose Herrando or Juan Oliver) made notable contributions. This time, the participation of La Ritirata in trio format has the outstanding presence of the Austrian violinist of Japanese origin Hiro Kurosaki, one of the most in-demand artists in the field of historically informed performance, and Lina Tur Bonet, one of our most outstanding baroque violinists.

Although less remembered than other musical events, in 2014 the four hundredth anniversary of the birth of Juan Hidalgo is also commemorated, one of the essential names of the Hispanic Baroque. Chapel Royal Harpist, Calderón's collaborator in the first Spanish zarzuelas and operas and author of an important corpus of chamber songs (the human tones), Hidalgo well represents a time of crucial cultural and political transformations that Fahmi Alqhai and his renowned Accademia del Piacere will recreate in a reconstruction that will be as faithful to the time as it is creative in its modernity..

Christian Zacharias, Indian-born German pianist (Jamshedpur, 1950) he is not only one of the most celebrated and international piano players of his generation, but also an appreciated conductor. Among his extensive discography as a soloist, he has left us reference versions of various authors, entre ellos Domenico Scarlatti. In this program, Zacharias revisits the Neapolitan and confronts him with Soler, both composers who found in the keyboard the best expression of a high and refined artistic sensibility that with Zacharias is in the best hands.