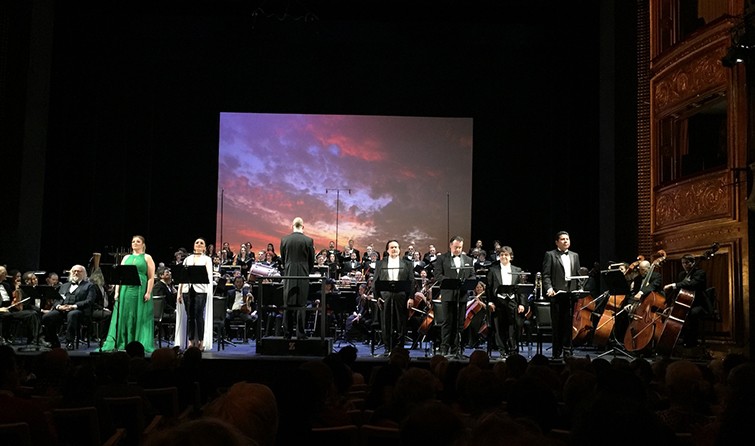 The Teatro de la Zarzuela continues its work to rescue the Spanish musical heritage so underrated. This time, and following Maruxa, arrives “The Tempest”. Master's work Ruperto Chapí which it premiered at the Zarzuela 11 March 1882. For twenty years he was scheduled regularly before disappearing, to this day. One of the main reasons for this absence on stage may be in the need for this work, because of their vocal demands, six great interpreters. And here is the first effort and success of Daniel Bianco, director of Teatro de la Zarzuela. He has gathered for this storm none other than Carlos Alvarez, José Bros, Mariola Cantarero, Ketevan Kemoklidze, Carlos Cosías and Alejandro López.

The next challenge came from the need to offer Tempest concert version as, as Bianco himself says "we do not always have the budget or to schedule enough time what we want". But, How is a zarzuela is done in concert version? Dialogues that characterize this genre scene, in which not only is sung, They are meaningless in a concert version. And this point has also been well resolved by Bianco. He commissioned the renowned playwright Alberto Conejero a version of the text Miguel Ramos Carrión. The result could be more effective. Conejero has moved the explanatory weight of a narrator talks, the best. Juan Echanove It tells the story from the inside of one of the characters, Mateo. It does so by creating a dramaturgical atmosphere in which the scenery appears to the viewer without more elements than her voice and her way of narrating, "It's not recite, It is not to interpret, not that way but I have to sing ". And his voice sounds like music next to the rest of the cast.

To complete the successes of this storm has had the greatest expert chapiniano today, director Guillermo García Calvo. A score like this, which already has the musical influences of the time and clearly detected in some of its passages, It requires accurate knowledge and reading. The beginning of the work has inspired instrumental effects in Wagner, specifically in the Flying Dutchman, with string tremolos and lightning. The saxophone, a novelty at that time, It is clearly French influence. As the arias of Verdi baritone inspiration or final sextet. All without a Spanish musical score no longer recognized. it, along with the theatrical capacity Chapí, are the values ​​that García Calvo has managed to read this score and the orchestra achieved a homogeneous sound, full of detail and fluidity between orchestra, narrator and singers.

Carlos Alvarez Simon plays the villain in this mysterious zarzuela. Generous and deep bass created the Simon evolving towards the torment which the author describes. The baritone is an extraordinary moment vowel. His Verdian timbre is like a velvet glove in this work. The public vibrated with its interpretation.

the tenor José Bros, as Beltran, He demonstrated the quality of his instrument from his first aria, "Salve coast of Brittany". The extraordinary agility of his voice, although he says and be closer to the light lyric tenor lyric, still intact. He seduced with its polished timbre and phrasing and line of exceptional singing.

We looked forward to hear in Zarzuela Mariola Cantarero. Her character Angela, Simon evil stepdaughter, He was full of intent and delicacy. Its warm timbre and elasticity of your voice to filar and grow to the delight of the public.

the mezzosoprano Ketevan Kemoklidze is the first Georgian singing at the Teatro de la Zarzuela. It is increasingly common for foreign singers are interested in our repertoire. Roberto plays the character and full of nobility and interpretive force.

the tenor Carlos Cosías is Matthew. A vivacious young man who plays with decision Cosías, grace and good taste, and an enviable diction.

Mexican low Alejandro López He gives life to judge, solemnly, It is responsible for unraveling the mysteries of the work.

Another main character of this storm is the chorus. Chapí handles very well in all his scores choral part. This book describes all the dramatic atmosphere and takes a leading role interacting with the singers, especially accompanying the concertantes who were cheered by an audience at this point delivered. Always plastering and showing women's chorus optimism reigns after the storm.