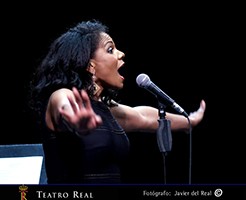 “Make Someone Happy”, Make someone happy. That was one of the subjects interpreted this 31 from January Audra McDonald at Teatro Real. A title and a purpose that the diva of Broadway He knew how to fully comply.

It was presented at the Royal a new cycle called "tramps Sessions". so called because they are devoted mainly to cabaret music and the great music. And it has been with one of its main voices that this cycle has started. Audra McDonald is one of the most original and versatile artists on the current scene. Trained at the Juillar School, American actress and television star and winner of six Tony Awards and two Grammys.

It is the first time that he performed in Spain and he has promised to return. Close and affordable woman, as the dozens of fans who waited for her at the exit could see, cordial and full of sensitivity that knows how to transmit very well to the public. With a great sense of humor he introduced all his themes, creating a welcoming atmosphere and predisposing the public, delivered from the start, to dream and enjoy.

He took a tour of the best numbers of the most important Broadway musicals. consecrated authors, as Harold Arlen O George Gershwin, and other current ones like Terry Shand. With a long voice, powerful and agile. Full of resources and registers and with a great capacity to shake and shake, amuse and thrill. As befits an extraordinary soprano like her. Just something left, by unnecessary, the microphone.

Always accompanied by her formidable musicians: Andy Einhorn, musical director and piano; Mark Vanderpoel, bass and drums Gene Lewin. Their interpretation of "Summertime" stood out., del musical Porgy and Bess, Gershwin, the only song he played without a microphone. Un sentidísimo “Maybe this time”, from John Kander, by Cabaret. An exciting "Climb Ev'ry Mountain", from Richard Rodgers para The sound of music. And how to tip an “Over the rainbow” by Harold Arlen for the Wizard of Oz, as a final point to a night full of melodies to dream.