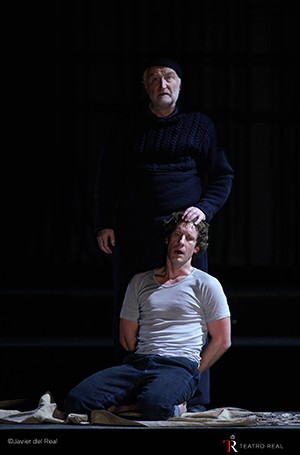 Didficil to understand that one of the most important works of the twentieth century had not represented today in Madrid. Billy Budd, the most colorful work of Benjamin Britten, came to Teatro Real from the hand of one of the most prestigious stage directors, Deborah Warner, who has filed a perfect radiography of the intentions of a Britten dealing with subtlety one of his most recurrent themes, that duality that for him exists between good and evil.

The second revised version has been offered consisting of two acts plus a prologue and epilogue. This version was always the composer's favorite. After watching this production, without a doubt it is also our favorite.

After the Flying Dutchman, where the bow of a ship starred in the scene, we arrive at a Billy Budd in which the approach is much more evocative. The indomitable, an 18th century warship, fill the stage with ropes, ropes and water. Where the sensation of movement is permanent and sometimes real, as it happens in the last act. And is that for Deborah Warner the theater and the sea are connected, "When the boats stopped being sailing and the ropes disappeared, appeared in theaters ".

Britten it, definitely, a great composer, but above all he is one of the greatest dramatic geniuses in operatic terms. His sensitivity when it comes to capturing the depth of the human being and building characters is extraordinary, and Deborah Warner is her best performer. He has scrutinized each of the layers with which Britten has covered his characters to present them to the public as the composer designed them and without making judgments about them. The result is not a complex production, unattainable in the eyes of the beholder that some stage directors like so much, but a genius far from superficiality and loaded with just and essential elements.

With mobile platforms that delimit the spaces through complex seemingly simple scenic mechanisms. With characters that describe themselves through intimate dialogues and with a group of singers whose interpretive level is above that of their timbre, something that this time, it's almost the key to success.

The play begins when the audience has not yet finished taking their seats. The first of the three main characters appears in the prologue and epilogue, an elderly Captain Edward Fairfax See that, a modo de flashback, tells the story. This role was written by Britten for her partner, Peter Pears. And it might not be the best role for him, as it requires a more extensive and lyrical tenor voice than that possessed by Pears. Here he is played by the British Toby Spence, that builds an anguished and inconsistent character martyred for having unjustly accused an innocent. Well in its most heartbreaking and deepest arias.

The second protagonist is the young and candid Billy Budd. A sailor full of attractions that dazzles his colleagues and superiors. The character requires a baritone with some agility. Maybe not the case with Jacques Imbrailo, that gives life to the protagonist. But his dramatic ability, even athletic (he was able to freehand the rope while singing), served to offer some of the most lyrical moments of the night. His last aria before he died is like a lullaby, evocative and simple, deep draft that overwhelmed the public.

The third protagonist is the evil John Claggart. A character full of intricate edges brilliantly played by Brindley Sherratt. This British bass player defended with ease a man who was tortured and fascinated by Billy Budd, whom he managed to destroy based on lies. Has memorable scenes, in which perfectly transmits the drama of a dark individual full of contradictions.

The set designer Michael Levine has done an extraordinary job, powered by lighting Jean Kalman and the fantastic direction of actors, with more than a hundred characters on stage, all men. A boat, the Indomitable, in which a suffocating atmosphere loaded with testosterone and aggressiveness has been achieved in which female voices have not been missed. Perhaps because of the enormous emotional charge that the work possesses and the tenderness that some of its characters share, or because of the tremendous orchestral richness that the score has, with a great variety of colors in numbers and solo voices.

The choir's performance deserves a special mention, one more. Their professionalism and the quality of their voices is known and indisputable, but they still have the ability to surprise and delight. Dozens move around the stage with rhythm and ease, with a dramatic ability Essential to create the atmosphere achieved in that prison ship, to generate movement, to believe the work and so that the energy produced by the power of their voices accelerates the pulsations of the stalls.

His musical director finally appeared at the Theater Ivor Bolton, and he did it to offer a brilliant version of a work he knows well, if only by language. It is a score with a very tight writing, high density, with many ensemble details in a large orchestra in which soloists are given great prominence.

Bolton establishes a perfect communication between the pit and the stage and the result is brilliant. Go from orchestral moments of great intimacy to others characterized by intensity and orchestral power, like the moment they prepare for battle. The orchestra is also in charge of narrating some of the most important moments of the work. When Captain Vere communicates his sentence to Billy Budd, the story is entrusted to the orchestra that performs it through 34 repeating chords in which major and minor modes have an astonishing and revealing narrative effect.

The play ends almost as it began, connecting the epilogue with the prologue through the memory that Captain Vere has of history. The end is diluted and seems to want to start over in a permanent bonnet day. It's a real feeling, wanting to see again this unsurpassed Billy Budd that is, definitely, the best i've seen in this theater in a long time.
Text: Paloma Sanz
pictures: Javier del Real
Videos: Teatro Real