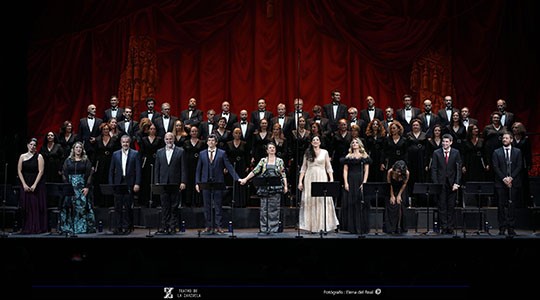 He Teatro de la Zarzuela has among its main functions that of disseminating the Spanish lyrical heritage. Mainly the one that for different reasons remains in oblivion. This is the case of Felipe Pedrell (1841-1922), whose work and figure urgently needed attention and dissemination. Pedrell is one of those Spanish opera composers who had no luck or recognition in his compositions. Opera was not exactly a genre that was understood or appreciated in Spain at that time. He himself lamented many times the scant repercussion of his works. Its importance for Spanish music was, however, unquestionable.. Musicologist and renowned teacher, he had among his disciples Isaac Albéniz, Enrique Granados, Christopher Taltabull, Peter White, Jose Maria Peris Polo, Joaquin Turina or Manuel de Falla.

In his attempts to compose a European opera, in the purest Wagnerian style, chose as a reference for the libretto the work of Fernando de Rojas La Celestina and composed an opera of the same name. In it they appeared, besides Wagnerian, French and Spanish influences, specifically the ancient repertoire and the oratorio.

In the music of La Celestina you can see the hand of the erudite musicologist, leaving in the background the musicality and coherence of a score more designed to please the general public.

Perhaps this is one of the reasons why this work was never released.. It is now that the dedication and commitment of the Teatro de la Zarzuela, allow the absolute premiere of this work in concert version.

The score of La Celestina is devilish at times, especially the one written for one of its main characters. In the cast that has participated in this premiere at the Teatro de la Zarzuela stands out Melibea from Miren Urbieta-Vega, with a homogeneous timbre and great beauty. It had moments of great musicality and well dramatized, like the end of Melibea before her death.

La Celestina was carried out by Maite Beaumont, who replaced Ketevan Kemoklidze who canceled his participation. It has merit that in just a few weeks he prepared an unknown and demanding role. In some moments of the first act his voice was in the background before the volume of sound of the orchestra and rest of the cast..

The one who went through the most difficulties was the Basque tenor Andeka Gorrotxategui with his character Calixto. It is not the first time that you have problems on this scenario. His vocal technique, a bit strained and strained, together with a very demanding score and with continuous jumps to the high, led him to have to be silent at times and to not be able to finish his score. We hope that these difficulties will be resolved soon and we can enjoy one of the most beautiful timbres of its string..

baritone Juan Jesus Rodriguez, always solvent and safe, on this occasion he offered a solid interpretation of Sempronio, Calixto's servant. It has a large volume, a warm baritonal timbre and nuanced, accented phrasing.

Simon Orfila endowed his character as Parmeno with a great vocal presence. Very successful in the character of the role he played, less refined than the rest, and displaying the rotundity of his voice.

Sofia Esparza, as Melibea's maid, had a prominent role, especially in the duet with his wife, where he demonstrated the good taste of his singing and his phrasing.

The chorus, whose role is main, was especially inspired. With the participation of some of its members in small interventions.

the work of Guillermo García Calvo at the head of the Teatro de la Zarzuela Titular Orchestra is becoming more and more remarkable. He valued musicality and, at times, extraordinary orchestration of a score that we have finally discovered.