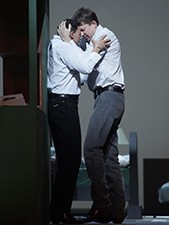 “Normal people who love”. This is, essentially, global vision Mortar He wants the audience extract Brokeback Mountain, whose opening has attracted an exceptional expectation. More than a hundred foreign journalists attended the world premiere 28 from January, and such interest must be attributed to the subject of the work.
Homosexuality has been treated previously by other composers, Berg and Britten as, but it is true that in Brokeback Mountain is reflected more explicitly. You can not say that this opera question about homosexuality as such, either on homophobia, but about love, human relationships and the need for them.

The story is deliberately placed in a scenario that is particularly hostile, a rural area within the United States. In the presentation of the work, Gerard Mortier insisted on finding audiences that do not conform only with music and divertimento, but is able to reflect, through opera, on current issues. He thinks that "a society like ours is forced to open certain discussions”.

Brokeback Mountain with the Teatro Real closes the so-called "cycle of impossible love". This is how wanted to name the element they have in common (for different reasons) the latest titles represented, L'elisir d'amore, Tristan und Isolde y Brokeback Mountain.

Little known is for the Spanish public its composer, American Charles Wuorinen. His work has focused more on symphonic compositions, Brokeback Mountain being his second opera. In 1970 he became the youngest composer to win the Pulitzer Prize with a composition of electronic music, Time's Encomiun.
With this score has managed to give each character that identifies music, and describe every moment and situation, especially those most disturbing. The work begins with an intensity that grows in emotion as you go. Ending at the most emotional moment, the dramatic and devastating end.

The scenery Ivo van Hove It is limited almost entirely to projections on a large screen that occupies the entire stage background. He wanted to make an independent visual element of Ang Lee film, and he has achieved. He moved to the mythical and real Brokeback Mountain to roll on the ground. This illustrated the scenes set there and shared by the two protagonists. The rest of the scenery, formed by few elements, decadent and arid, chill up the asphyxiating and living environment in its two stars. Caught in a more immediate life outside them where the guidelines set by the social environment, pushes them back to that mountain that frees them.

Annie Proulx, the author of the book, He has made a very good fit for an opera libretto. exact phrases short and very appropriate time to be interpreted. With a phrasing that is well suited to the music of Wuorinen, despite its difficulties.

It is disturbing how slowly passing scenes in darkness and silence of the stage. Ennui contribute to the fact that a work declaimed rather than sung. There is no expectation argument much less emotion. Everything is predictable. The few lyrical moments fade away at the hands of twelve-tone music. Two hours of declamation on an almost bare stage are eternal.
The two actors perform a more important role as actors and singers. Daniel Okulitch innterpreta Ennis del Mar, the cowboy more introverted and less sociable. Tom Randle es Jack Twist, more extroverted and positive part of the couple. Both with great presence on stage and running very successfully a complicated score by low lucimiento.

The rest of the cast did his brief role. hearing voices strong Spanish is appreciated and experienced as the soprano Celia Alcedo. a guarantee.

Orchestra shone again, this time, hand German Titus Engel. Great expert in directing premieres of contemporary operas, as already he demonstrated in this same theater with the blank page of Pilar Jurado.