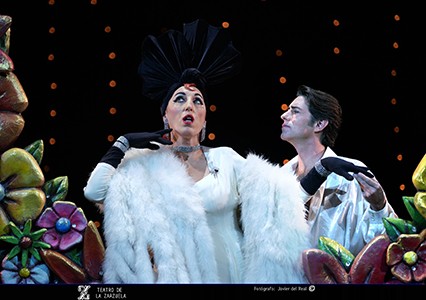 He came to Teatro de la Zarzuela the operetta El Cantor de Mexico. composed in 1951 by the French, but Hispanic American, Francis Lopez, and written to be interpreted by the famous Luis Mariano, who came to interpreting in more than 850 occasions.

His stage manager, Emilio Sagi, He adapted and updated the initial script, somewhat outdated, for release 2006 at Théàtre Châtelet. Production has arrived in Madrid under the stage direction of Daniel Bianco is, as the composer called, a operetta extravaganza. A bright and spectacular scenery, where scene changes occur constantly and with great dynamism, recreating the atmosphere of the clubs of the time and shows Carmen Miranda.

Very important is the job of musical director Oliver Diaz in front of the Titular Orchestra of the Teatro de la Zarzuela. A work like this, near the magazine and melodies filled with completely different repertoires that usually, like jazz, mambos or boleros, not easy to handle the variety of musical material. The result is an undoubted quality.

Leading the cast includes the tenor José Luis Sola, evoking Luis Mariano, but with difficulties. Low volume of voice and no sound, except in the treble, where the brightness and color have a strong presence.

Cricri character is performed by soprano Sonia de Munck. Get a good interpretive level, but he can not get your voice heard. Much less when accompanied by other singers or increases the volume of the orchestra.

experienced Luis Álvarez He plays brilliantly to empresario Ricardo Cartoons, accompanied by a spectacular Ana Goya, that brings to life the hilarious Miss Cécile. Leading the cast is theater Rosi de Palma, as Eva Marshall, diva kitsch that rises with the prominence of the work thanks to his personality and powerful stage presence.

The Teatro de la Zarzuela season begins with a different work, a show that is pure divertimento. You want to with it a message, la Zarzuela wants to reach all audiences and open to society.