Luisa Miller Chronicle, in Verdi, at the Theatre Royal 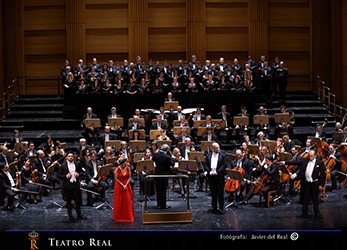 Two performances had scheduled the Teatro Real of the Luisa Miller verdiana. A work unjustly considered minor in the repertoire. Perhaps because its composition, prior to the trilogy formed by Rigoletto, The Troubadour Y La traviata they put her in the background. Verdi account on this occasion with the librettist Friedrich von Schiller giving more importance to the love and social drama of the original work, Cabal and Love (intrigue and love). What the author himself will call "bourgeois tragedy". These new argumentative “motives” could well be justified in avoiding the action of censorship. Very active in those moments of European revolutionary upheaval in 1848.

This has been a concert version. But you can't say it wasn't staged. More and more operas in concert are, dispensing with the always uncomfortable music stands, are semi-staged by the singers, creating a lyrical atmosphere closer to an opera night with all its arming.

At the head of the management was the American James Conlon. A true lover of Luisa Miller. To the point of calling his daughter Luisa and thereby evoking the paternal filial relationship of the protagonists. His knowledge of the work is total, He barely consulted the score to which he printed a lively rhythm full of tension from the overture. Especially in the endings. He extracted a pure Verdian sound from the orchestra, mainly from the strings. The chorus, in his usual line, magnificent!.

On the sidelines of music, without a doubt the voices were the protagonists of the night. Leo Nucci, who embroiders the dramatic roles of Verdian father, retains extraordinary vocal qualities to its 74 years. The shortness of breath at times and your reservations, in others, to be able to undertake the finals, are compensated by a skill in dramatization that only experience provides.

The Croatian Lana Kos It was quite a surprise in her role as Luisa. Its large central register is the ideal support to move through a powerful lyrical soprano tessitura. Vigorous, homogeneous voice with enough headroom to refine the highs.

The evil Wurn was embodied by the Canadian baritone John Relyea. Robust, shadowy voice to compose an interesting character who fought a powerful duel with Walter.

Dmitry Belosselskiy played a magnificent Earl of Walter. He wore good treble in his aria "My blood, I'd give life " and his powerful and smooth bass in the duet with Wurn "The high heritage".

The Madrilenian Maria Jose Montiel played the always thankless role of Federica. Just a few days ago we listened to it in the Teatro de la Zarzuela in the role of a María Moliner flawless and, suddenly, appears on stage at the Teatro Real with a completely different register. With a verdi score of abyssal tones for a mezzo string, solve your character with a dense and compact voice, demonstrating that the radius of action of his voice is wide and that he is in one of the best moments of his career.

The young Neapolitan tenor made his debut at the Real Vincenzo Costanzo. He came to replace those initially chosen for this Rodolfo. It is not easy to approach this role with 24 years, singing on the proscenium and surrounded by well-established voices. And Costanzo does it with gallantry and determination. Your instrument is under construction, like his ability to interpret, but it aims a nice timbre and as soon as the fiato is prolonged and the technique exceeds the physical effort, you can tackle these demanding roles with all the guarantees. The applause of the public after the well-known aria “When night to calm” They gave him the confidence to tackle the rest of the work with greater security. Next season we will have the opportunity to listen to him again in this Theater in his role as Pinkerton and we will observe his evolution. Mimbres has.

Marina Rodriguez-Cusi played Laura. This Valencian mezzo-soprano is always a guarantee. His brief role showed his good work. Despite being located behind the orchestra and the rest of the cast, his voice was heard full.

The successful intervention of César de Frutos playing a villager.

This Luisa Miller left very good feelings in the public. From time to time a purely operatic title is appreciated, and nobody better than Verdi to provoke these kinds of emotions.

Salvadore Cammarano libretto based on the play cabal and Love (Intrigue and love, 1783) de Friedrich von Schiller. Premiered at the San Carlo Theater in Naples on 8 December 1849.