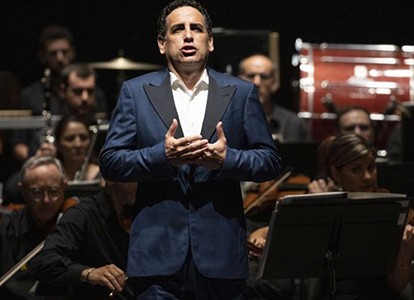 Last 9 August the concert took place Juan Diego Florez in Peralada, with arias and duets from Italian and French repertoire, where the Peruvian tenor was accompanied by Armenian soprano Ruzan Mantashyan and the Symphony Orchestra of the Vallés, directed by Guillermo García Calvo. Juan Diego Florez again showed his superb vocal and interpretative quality and a great ability to call, since the auditorium was completely full Peralada (the tickets had sold out long ago) of an enthusiastic audience that he had even come from abroad.

Time passes at high speed and still remember that recital at the Church of the Carmen de Peralada, in 2002, where Juan Diego Florez, debutant festival ampurdanés, He enthralled the audience with his beautiful voice, elegant phrasing, great musicality and an extraordinary high register that the Peruvian tenor exhibited generously, Rossini ary different and, especially, in his interpretation of "A mes amis" of Daughter of the Regiment Donizetti, with its nine C4, always included in his recitals. So, I had occasion to interview, where I said his admiration for Alfredo Krauss, and came to tell me that was not among his future projects sing Edgardo Lucia of Lammermoor, considering it a role away from her vocal possibilities. For many years, his performances have been focused on Rossini repertoire, with assiduous attendance at the Festival of Pesaro, where it has come to play up to twelve different roles. Also it included in his repertoire characters from operas by Vincenzo Bellini great demand in the high register, as of Elvino La Sonnambula and Arthur I Puritani, next to another of his favorite creations: Tonio Daughter of the Regiment.

Juan Diego Florez has been able to wait for their vocalism matured and was ready to make a transition to a more lyrical repertoire, maintaining the beauty of its instrument timbres, careful phrasing and homogeneity of records. Definitely, the turning point in his career, It occurred when successfully debuted Edgardo Lucia, Liceu in Barcelona, in December 2015. Since then, with a wider central registry and a greater volume sound, He has been adding new roles to her repertoire: Werther by Jules Massenet Romeo Romeo and Juliette de Charles Gounod, near Hoffmann Tales of Hoffmann, de Ofenbach, Gennaro de Lucrecia Borgia. Y, Verdian their creations Fenton and the Duke of Mantua in Rigoletto, He added Alfredo Germont from that of La Traviata. Definitely, It is getting to have a similar repertoire to that of his admired Alfredo Krauss, even, including two roles that the great tenor canary did not interpret considered unsuitable for voice: Roaul of Nangis of Huguenot of Giacomo Meyerbeer and Arnold Guillaume Tell Rossini. Y, Very recently, in April 2019, He added the character of Des Grieux Manon Massenet, another famous role which also made a great creation Alfredo Krauss. Next year, Juan Diego Florez debut of Rodolfo Bohemian Puccini precisely next to Mimi Ruzan Mantashyan- Krauss role only played two roles on stage and in studio recording a record, coming to sing Rodolfo say that quite often meant giving up the bel canto repertoire. Definitely, This will be the great future challenge of the Peruvian tenor.

In the recital has been heard in Peralada, Peruvian tenor has been accompanied by the young soprano Armenia Ruzan Mantashyan, good stage presence and possessing a beautiful timbre, moving well in the central register and an acceptable resolution of agility, although with a treble, at times, could not properly placed.

The concert began with the Overture to the opera Mignon of Ambroise Thomas, where Guillermo García Calvo managed to extract maximum performance to the discrete Vallés Symphony Orchestra. Interventions of the two singers began with fragments belonging to the opera Romeo and Juliet Charles Gounod. First, the tenor line showed excellent singing the famous aria "Ah! Lève-toi soleil "showing important idiomatic and stylistic mastery in the French repertoire. Then, the interpretó notable soprano manera "I want to live", and both singers, well attuned, They joined their voices in the beautiful duet "Nuit d'HYMENEE".

The orchestral performance of the overture The favourite de Gaetano Donizetti, I gave way to the second block of this concert dedicated to the belcantismo with fragments Lucia of Lammermoor de Gaetano Donizetti, starting with the great Act I duet "Sulla tomba che rinsera ..." very well played by Juan Diego Florez, showing her beautiful timbre, with excellent and proven fraseo, and where Ruzan Mantashyan made a remarkable resolution of agility but with obvious problems in their attacks on the high register, extreme and strident notes quite misplaced. The tenor faced with true mastery throughout the end of the opera, showing en el aria "Tombs of my ancestors, the last remnant of an unhappy ESTIRPE", a song full of melancholy, that makes, genuine anger and frustration at what it sees as a betrayal of Lucia "Ungrateful donna!... "to conclude his performance with the cabaletta" Fra little to me ricovero "where the tenor qualifies to the maximum his song to show the infinite penalty that has produced the news of the death of Lucia.

The second half began with the performance of the famous aria "Salut, chaste and pure dwelling "for Splendor Gounod, well played by Florez, but with little variety of accents, placing the bound C4, but the ease of yesteryear. Mantashyan Ruzan's performance improved considerably with respect to the first part, playing very significantly "Ah! I laugh to see myself so beautiful in this mirror " , the famous aria of the jewels, also Splendor, where coloratura soprano decided While French, and he offered a good line edge, better controlling uploaded to acute.

Muy buena interpretación del dúo "I marked the hour of departure ... .We live in Paris both", from Manon Jules Massenet, sung with style and great musicality. The remarkable orchestral performance of the overture to the opera L'amico Fritz de Pietro Mascagni, He gave way to the interpretation of the entire final scene of Act I of Bohemian Giacomo Puccini, where Juan Diego Florez was brilliant in the famous aria "Che gelid Manina", with an emission highly controlled, expressiveness and excellent phrasing, C4 emitting very well and concluding aria with great elegance. Ruzan Mantashyan showed his affinity with the character of Mimi, showing an expressive and delicate line singing the aria "Sì, My name is Mimi ", and both performers endowed intense lyricism of the duet "O soave Fanciulla", with which officially ended the concert. Strong and continuous applause led to a series of tips, the first one "Oh! My dear papa "de Gianni Schicchi, of the Triptych Puccini, where the Armenian soprano gave his best performance of the entire evening. Juan Diego Florez was showcased with the famous "Granada" by Agustin Lara, and two singers showed strength and gracejo in duo Solea Rafaelillo of the Gato Montes Manuel Penella. then, and like all the public expected, Peruvian tenor appeared to play guitar in hand with sympathy and strong communication skills with the public, the songs: “Palmero”, "The flower of the cinnamon" and a heady "Cucurrucú dove", and conclude the concert with an excellent rendition of "Nessun dorma", from Turandot Puccini, which it caused a real delirium of the public. Definitely, a concert to remember.