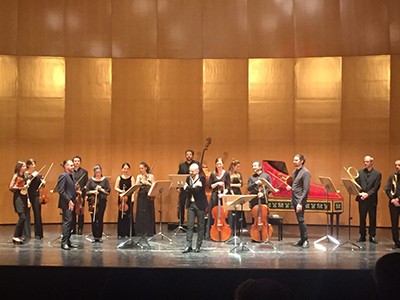 Despite living in Madrid and one of the voices of countertenor most claimed today, the Argentinian Franco Fagioli He had not yet made his debut in this city. That may be one reason why there were so many empty seats. And it was Fagioli, at least until Wednesday, unknown to the general public. Who did not attend the 22 March to Fagioli in recital Teatro Real just one of the surprises of the season was lost.

Fagioli's voice is different from any other singer of her rope. More search a contraalto that a counter. Able to reach three octaves, He gave a recital that was less to more, virtuosism reaching the apotheosis of the second part, where he reached the sobreagudo. His technique is accurate, breakneck coloratura. His voice has an elasticity that allows you to move from severe formidable easily treble, and always generate a shimmering sound, thanks to a beautiful timbre. Charismatic on stage, It was feeling comfortable as he went into the program and offered several tips that concluded with 'Ombra mai fu’, from Händel, which they caused the delirium of the public. It has a serious problem with diction which should solve. But his lousy fraseo not spoiled at any time two and a half hour concert which was accompanied by Dimitry Sinkovsky, in front of Tomato, who were the perfect companion for vocal pyrotechnics Fagioli.