Goyescas, Plácido Domingo y Gianni Schicchi. All together at the Royal Theatre 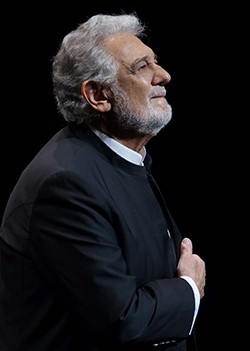 He had scheduled the Teatro Real to end the season with his now traditional opera with Placido Domingo. It was about Gianni Shicchi, de Giacomo Puccini, that along with Goyescas, of the teacher Granados, together they form the poster for this end of year. The painful death of Sister Sunday, and humor with which Puccini's work refers to death, They have led to the now baritone to suspend its participation in that work. Instead, and how only the biggest do, Domingo offered a small concert in the break of both works.
The end result is a varied operatic program, difficult to marry, where the prominence and success belonged to Plácido Domingo in an anomalous evening, it is not frequent to find such a program.

The evening started with Goyescas. Granados' work was very well directed by a Guillermo García Calvo who knew how to perfectly delineate a different work. Composed backwards, as the director himself says, since the music was first and the lyrics were written about it.

The semi-staging, Poor by the darkness of the stage that appeared soulless, contributed to the tedium into which the work fell from the first bars. The attitude of the singers on stage, except Ana Ibarra, it didn't help expressiveness too much. Only the music was safe.

the soprano Maria Bayo, that we hadn't heard in the Real for a long time, dispatched the character with skill and rigor. Andeka Gorrotxategi Y César San Martín were often hidden behind the choir and orchestra. Especially the first.

After Goyescas came He, Placido Domingo. Preceded by a great ovation as soon as I set foot on stage, offered a short recital. “Enemy of the fatherland”, by Andrea Chénier from Giordano; “Pity, respect, love"From Verdi's Macbeth and"Madamigella Valery”, of La traviata with an extraordinary Maite Alberola. The concert was completed with “Be any of the daughters”, of La Cenerentola by Rossini by Brunó Praticó, whose cracked voice suited the character well. Y Luis Cansino who interpreted "L´Onore”By Falstaff with a grace that an already dedicated audience liked. The now traditional annual appearances of Domingo at the Teatro Real, their emotional load increases more and more. It is not surprising that the teacher wanted to have this "little" appearance on stage.. The energy and affection of your audience, so necessary in those days, it sure was worth it.

The last dish of the night was Gianni Schicchi Giacomo Puccini. The scenery designed by Woody Allen it was very colorful. A motley house, more typical of southern Italy than of Venice where it takes place, but to which not a single detail was missing. Very cinematic, as it could not be otherwise. It even started with a large screen where the credit titles appeared. The powerful music of Puccini, read like no one from the moat by Giuliano Carella, created an atmosphere of an Italian film of the years 50.

The painting of singers, very numerous in this work, they developed with ease and comedy through the busy and crowded stage. The paper of Nicola Alaimo it was not easy. It is not to replace Plácido Domingo in the role of Schicchi, but he solved it with success and a powerful voice. Even though she looks younger than her own daughter on stage.

The rest of the characters, Maite Alberola, a mischievous and refreshing Lauretta, Elena Zilio, Albert Casals, Vicente Ombuena, Bruno Praticò, Eliana Bayón, Luis Cansino, Maria Jose Suarez, Francisco Santiago, Tomeu Bibiloni, Valeriano boats, Federico de Michelis, Francisco Crespo, Darius Baron and the dead, Gabi Nicolas, they finished printing the comic character to the work in a masterful way. A very successful theatricalization and direction of actors. All perfectly disordered in that purely Neapolitan stage that delighted an audience that started the night bored, he continued it with emotion and ended it with a showy entertainment. Who gives more?