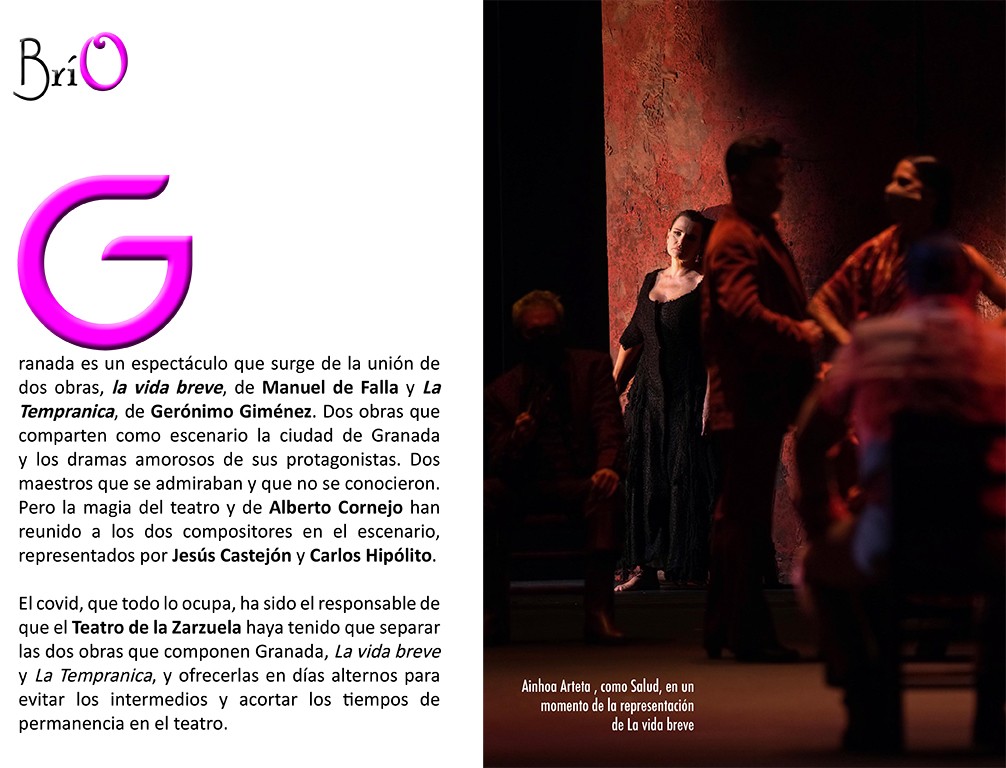 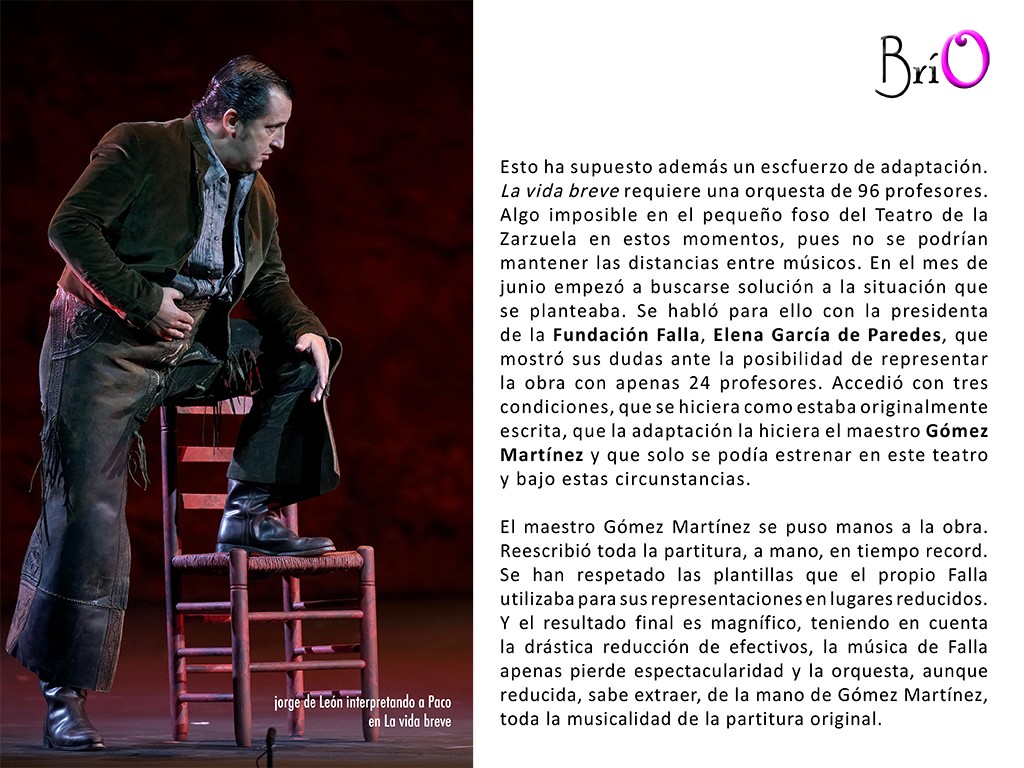 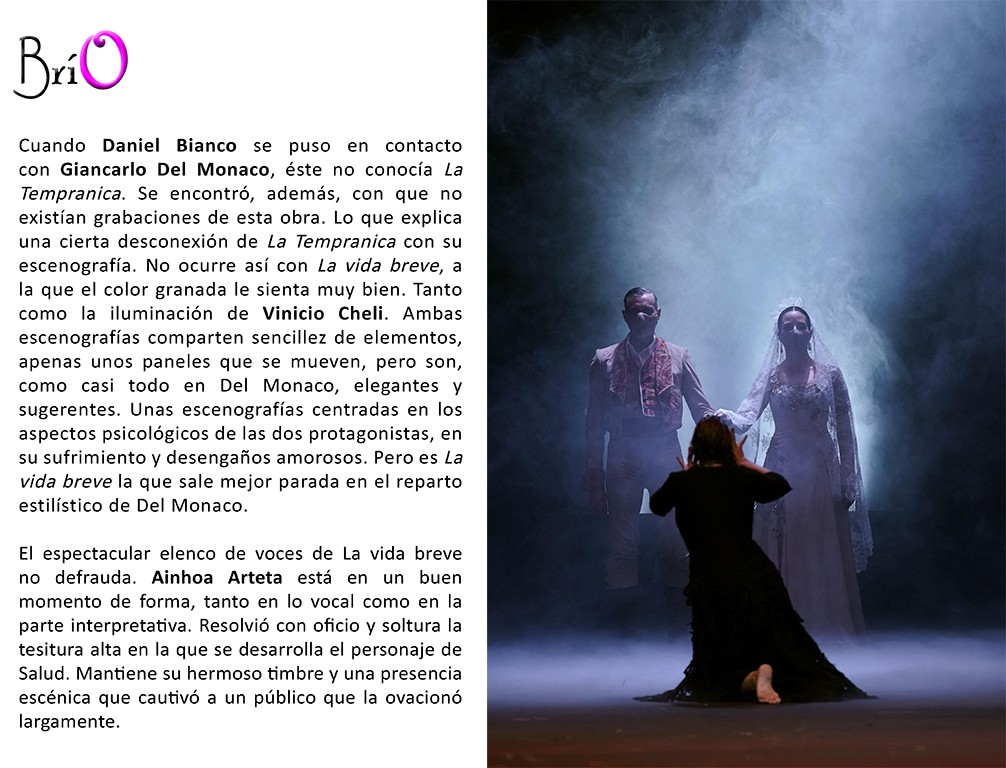 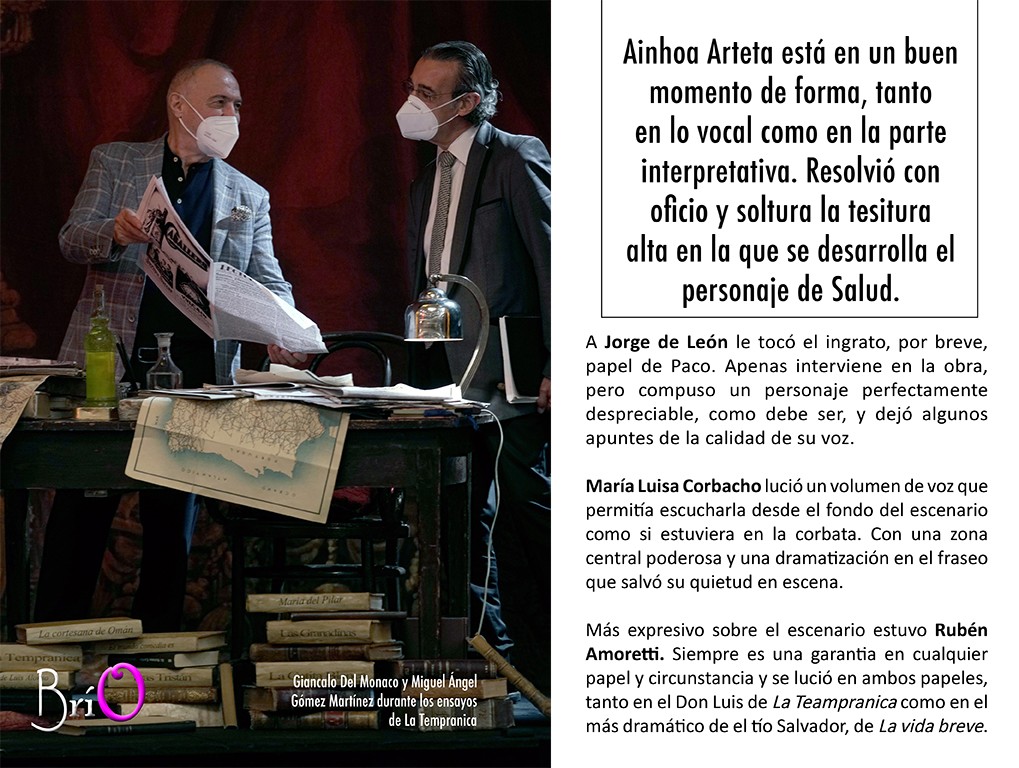 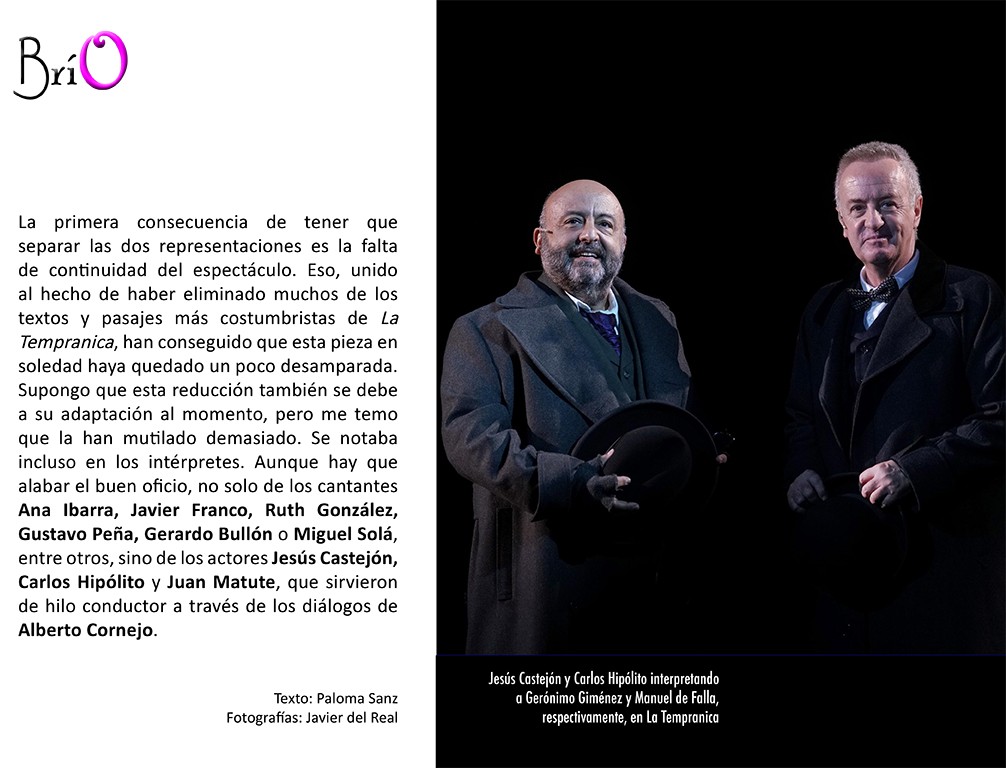 Granada is a show that arises from the union of two works, short life, by Manuel de Falla and La Tempranica, Geronimo Gimenez. Two plays that share the setting of the city of Granada and the love dramas of its protagonists. Two teachers who admired each other and who did not know each other. But the magic of theater and Alberto Cornejo have brought the two composers together on stage, represented by Jesús Castejón and Carlos Hipólito.

The covid, that occupies everything, has been responsible for the Teatro de la Zarzuela having to separate the two works that make up Granada, The short life and La Tempranica, and offer them on alternate days to avoid intermission and shorten the time spent in the theater.

This has also involved an adaptation effort. The short life requires an orchestra of 96 teachers. Something impossible in the small pit of the Teatro de la Zarzuela right now, Well, the distances between musicians could not be maintained. In June, a solution to the situation that arose began to be sought. They spoke to the president of the Falla Foundation, Elena Garcia de Paredes, who showed his doubts about the possibility of representing the work with just 24 teachers. He agreed with three conditions, that it be done as it was originally written, that the adaptation was made by maestro Gómez Martínez and that it could only be premiered in this theater and under these circumstances.

The teacher Gómez Martínez got down to work. Rewrote the entire score, by hand, in record time. The templates that the Falla itself used for its representations in small places have been respected. And the end result is magnificent, taking into account the drastic reduction of personnel, Falla's music hardly loses spectacularity and the orchestra, although reduced, knows how to extract, by the hand of Gómez Martínez, all the musicality of the original score.

When Daniel Bianco got in touch with Giancarlo Del Monaco, he did not know La Tempranica. It was found, Besides, that there were no recordings of this work. Which explains a certain disconnection of La Tempranica with its scenography. Not so with La vida breve, to which the pomegranate color suits her very well. As much as the lighting of Vinicio Cheli. Both sets share simplicity of elements, just a few panels that move, But they are, like almost everything in Del Monaco, elegant and suggestive. Scenographies focused on the psychological aspects of the two protagonists, in their suffering and love disappointments. But it is La vida breve the one that comes out the best in Del Monaco's stylistic cast.

The spectacular cast of voices of La vida breve does not disappoint. Ainhoa ​​Arteta is in good shape, both vocally and in the interpretive part. He resolved with skill and ease the high tessitura in which the character of Salud develops. It maintains its beautiful timbre and a stage presence that captivated an audience that gave it a long standing ovation..

Jorge de León was the ungrateful, briefly, Paco's role. He hardly intervenes in the work, but he composed a perfectly despicable character, as it should be, and left some notes on the quality of his voice.

María Luisa Corbacho wore a voice volume that allowed her to be heard from the back of the stage as if she were wearing a tie. With a powerful central zone and a dramatization in the phrasing that saved his stillness on stage.

More expressive on stage was Rubén Amoretti. It is always a guarantee in any role and circumstance and it excelled in both roles, both in Don Luis de La Teampranica and in the more dramatic one of Uncle Salvador, from The Short Life.

The first consequence of having to separate the two representations is the lack of continuity of the show. That, together with the fact of having eliminated many of the most traditional texts and passages of La Tempranica, They have managed to make this piece in solitude a bit helpless. I guess this reduction is also due to its adaptation to the moment, but I'm afraid they have mutilated her too much. It was noticeable even in the interpreters. Although the good trade is to be praised, not only from the singers Ana Ibarra, Javier Franco, Ruth González, Gustavo Peña, Gerardo Bullón or Miguel Solá, among others, but of the actors Jesús Castejón, Carlos Hipólito and Juan Matute, that served as a common thread through Alberto Cornejo's dialogues.