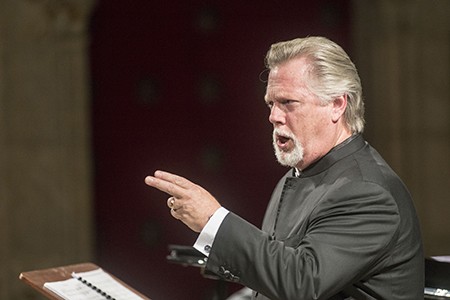 American veteran tenor Gregory customer (Kankatee, Illinois, 24 February 1954), He debuted in the early eighties of last century with a lyrical voice light, which allowed him to meet and bel canto roles mozartianos. Suffering from cancer 1994, diagnosed after some representations The Italian en Algiers from Rossini, at Teatro de la Zarzuela, He managed to overcome severe illness and resume his career 1996. Over the years his voice has changed, becoming more physicality and volume, deriving the tenor tessitura lyric-spinto. From 2009 a new stage of his career began to incorporate its first repertoire paper verdiano, the Arrigo The Sicilian Vespers. In 2012 He sang for the first time Otello from Verdi, paper that has succeeded in recent years in major European theaters, It is one of the few tenors in history that have addressed the two Otello, the rossiniano and verdiano, and this took place successively in the months of July and August 2015, in the Teatro alla Scala and at the Peralada Festival. In the past five years he has been debuting in other Verdian roles: Radames' Aida, Manrico de The Troubadour, Don Alvaro de The force of Destiny, Rodolfo de Luisa Miller, Riccardo A masked ball. He has also successfully tackled other roles as Turiddu of Cavalleria rusticana, Canio the I Pagliacci, Des Grieux in Manon Lescaut, Andrea Chènier and Pollione of Rule. In recent years he has sung more sporadically bel canto roles as Roberto Devereux, who played in the Teatro Real Madrid in 2015 and Mozart's Idomeneo in Palau de Les Arts Valencia in 2016; Obviously them- He has lost capacity for agility, It is addressed assiduously much more dramatic repertoires.

In his recital of Peralada, accompanied by the Valencian pianist José Ramón Martín, It has been able to confirm a voice fatigue given its incessant activity. Nowadays, the voice is certainly voluminous, easily for singing in strong, difficulties for middle voices, a serious problem, and trend, at times, an irregular emission color changes in the voice. All this is mitigated by its great theatrical capacity, To refine the most of their interpretations.

The concert began with a dedicated block Vincenzo Bellini composed of three beautiful and soft songs: "Vaga luna che inargenti", "Melancholy, gentle nymph " Y "Valve, or pink lucky ", well they interpreted and served for the tenor voice warm and then addressed brilliantly aria-cabaletta Pollione "Meco at the altar of Venus ... ..me protege, Me defends " in Rule, inserting in the aria the C4 and relevant variations in the repetition of aria and cabaletta. The recital continued with the performance of two songs Rossini: “Remoteness" Y "Tyrant to Spanish”, interventions both excellent pianist José Ramón Martín, and where Kunde offered a song full of musicality and expressiveness. The first part of the concert ended with the complex aria Arnold "Asylum hereditary" from Guillaume Tell Rossini, that Kunde faced with courage and good line edge, emitting vibrant treble, although not with the brilliance of yesteryear-the years take their toll- and I mean the interpretation offered by Guillaume Tell in Corunna, in 2010, directed by Alberto Zedda, sadly missing this year. So, their interpretation of "Asylum hereditary"It turned magistral, followed by cabaletta "Friends, friends" (omitted in Peralada) with excellent sustained rises to C4.

The second part of the program began with a dedicated block Verdi with three songs: "Sunset", "The Mystery" y "Brindisi" where the singer had some difficulties in their attempt to issue middle voices. It was magnificent interpretation of recitative-aria of Riccardo "Perhaps he drew threshold ... .But if I am forced to lose you" from A masked ball, sung in the best Verdian style, with an elegant and incisive phrasing. The inclusion in this recital of aria "How cold your little hand" from Bohemian from Puccini was not too appropriate, as the voice of Kunde, nowadays, lacks that youthful timbre required by the romantic Rodolfo. But nevertheless, the singer most notably played without using score, although he spent on tenterhooks in the C4, Quickly cut and toned down. Ya, to conclude the recital, It turned out brilliantly dramatic performance full of expressivity, the Air de Canio "Recite!….Wear the jacket" from Pagliacci, definitely, Your intervention. Highlight the magnificent performance by pianist José Ramón Martín, very attuned to the singer.

Gregory Kunde offered a couple of encores flawlessly performing songs “What a wonderful world” Y "My way”, which respectively they popularized in the sixties of the last century Louis Amstrong Y Frank Sinatra.

It is made at fault not included in this recital any aria Otello Verde, so many triumphs role has meant for the American tenor in recent years and has recently performed at Covent Garden in London, alternating deal with the media Jonas Kaufmann, with a much higher performance offered by the German tenor.