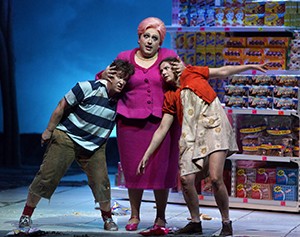 A large packaging as a curtain hides the surprise and magic of the story that recreates the music of Humperdinck and the scenery of Pelly. A production of Hansel and Gretel what, since its premiere in Madrid 1901, there had again been represented in this Theatre.
With the denomination of Fairy tale opera (opera-fairytale), Humperdinck plays the adaptation of the tale of the Grimm brothers. Eliminate the steepest parts and preserve the forest as an important element in the German tradition. That magical and romantic place that provides accommodation to the most disturbing dreams and fantasies.

Pelly's delicious scenography manages to transform a situation of extreme poverty for the protagonists, in an endearing fairy tale. The sharpness and imaginative talent of the scenery is reflected in every detail that appears on stage. The house built with cardboard. The forest littered with bare trees and covered in garbage bags. The screens that appear showing the gluttonous dream of children. The magical appearance of fairies. And all wrapped up in music and light that make that scrubbed and dirty forest the mysterious and magical place where all the children in the room had already lost ourselves at that point in the performance.. Only the end of act two woke us up, Of course, hungry.

In the third act, the leading role is played by the large supermarket that replaces the traditional chocolate and ginger house. All of it heaped with succulent junk food. From it arises a well characterized José Manuel Zapata playing the evil witch. Brief but leading role. Show Zapata, once again, his extraordinary ability to play quirky and histrionic characters. Without abandoning the vocal part that skillfully solves. It was for all this the one that obtained the greatest recognition from the public.
The address of Paul Daniel it was brilliant and well worked. Of a great aesthetic neatness to which there would not have been an extra point of sweetness. The orchestra sinned at some point in excess of volume. This punctually spoiled the work of some of the singers. Highlight the openings, the fairies scenes, the music that accompanies the sweet dream of the brothers in the forest, and the splendid moments of tension of the strings evoking the musical transparency of a Wagner conductor and inspirer of Humperdinck.

The pair of brothers composed of Alice Coote (Hansel) Y Sylvia Schwartz (Gretel), they interpreted their characters with great ease, moving across the stage with grace and ease. Alice Coote, with its interesting bass, drew a mischievous and vocally nuanced Hänsel.
Sylvia Schwartz had some problems with the volume of the orchestra, but the agility and subtlety of her voice were perfect for the character of Gretel.
Peter and Gertrud, the children's parents, are played by the Danish baritone Bo Skovhus and the british mezzo-soprano Diane Montague. They form a neat vocal couple and perform well thanks to their stage presence. Skovhus maintains a good projection, but they have increased their difficulties with the lower notes.
Montague made a perfect hysterical mother overwhelmed by the family situation.

The goblins, of the dream Elena Copons, and the dew Ruth Rosique, they were splendid in their brief speeches. Two good voices that we hope to hear more often.

Very well Little Singers of JORCAM from the hand of its director, Ana González, although they moved with enough difficulty around the stage, dresses for the occasion with large padding to make them extra fat.

A delicious production with a good response from the public that left the Happy Theater. A work that provokes a smile full of tenderness.