Idomeneo desembarca in The Arts in Valencia 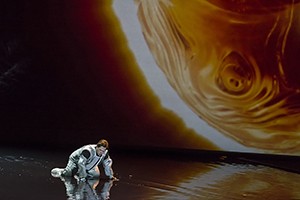 The Palau de les Arts in Valencia He has made a strong commitment, by staging its own production, an opera by Mozart as Idomeneo, King of Crete, little-known Spanish public, despite its high quality music, as it is usually represented very rarely, at least compared with other famous titles like Mozartian: Le nozze di Figaro, Don Giovanni , Così fan tutte The Magic Flute. The five scheduled performances of Idomeneo, They have proved a success, by mass attendances, He has applauded tackles the end of the same.

Mozart received in summer 1780, the order of the elector Karl Theodor of Bavaria, composing a serious opera written in Italian, finally take the title Idomeneo, King of Crete, to be premiered at the Munich carnival 1781. Abbe Giambattista Varesco He was commissioned to develop the script, where the mythological drama narrating the King Idomeneo of Crete, on his return to fight in the Trojan War. The neat and extensive booklet prepared by Varesco offered a wide range Mozart to write music, but soon he began to have doubts about its dramatic structure, having to review it thoroughly, in an attempt to adapt to the maximum text and music. Mozart was especially interested in showing the contrasts between the two pairs of female and male performers: sweet and kind Ilia, as opposed to evil and manipulative Elettra, with his outbursts of hatred, jealousy and anger; Idomeneo faltering as opposed to the sincerity and idealism that always shows his son Idamante. Mozart began composing the score in late summer 1780 Y, once completed the first two acts, in November of that same year, he went to Munich where he finished third and final act, it cost a great effort, with continuous reviews, until very shortly before the premiere at the Court Theater in Munich 29 of January of 1781. Mozart eliminated at the Munich premiere and several arias composed for Act III: Idomeneo "Peace returns to the core”, of Idamante “No, the dead", the complex of Elettra "D'Oreste, of Ajax "and the Arbace (Idomeneo counselor) "If there is written the fates en". At the premiere in Munich, It also included a brilliant ballet music.

Mozart's Idomeneo conducted a review that was presented privately the 13 March 1786 at the Palace of the Prince Johans Adam Auersperg Vienna. The singers were all amateurs and belonging to the nobility. In that version of Vienna, the role of Idamante sang a tenor, while in Munich he had made a castrato. Mozart made some changes in the score: Idomeneo scene and Arbace at the beginning of Act II, It is changed by another which involved Ilia and Idamante. In Act III, a new duo Ilia and Idamante is included, replacing written for the premiere of Munich.

Idomeneo fell into the deepest oblivion, and recovery occurred at the Glyndebourne Festival 1951, with a series of representations directed by Fritz Busch, being his assistant John Pritchard, who becomes the great guarantor of this opera, which often lead, Version essentially Vienna: You can hear the recorded Idomeneo study, in 1956, with John Pritchard to the front of the orchestra of the Glyndebourne Festival, and performed by Sena Jurinac (their), Leopold Simoneau (Idamante), Richard Lewis (Idomeneo) Y Lucilla widows (Elettra). As well, with address Pritchard, there is a live take held at the Glyndebourne Festival 1964, with Idamante, beautifully sung by a young Luciano Pavarotti, next to Gundula Janowiz (their), Richard Lewis (Idomeneo) and Catalan soprano Enriqueta Tarrés como Elettra. Ya, from the seventies of the last century, He began to represent, fundamentally, "Version Munich", where the role of Idamante is sung by a lyric mezzo. This is the version that has been heard in Valencia, with the inclusion of very difficult Elettra aria of Act III "D'Oreste, of Ajax ", which as already mentioned was suppressed by Mozart at the premiere of Munich.

This new production of Idomeneo conducted by the Palau de les Arts, He has as stage director and set designer to his current Mayor Davide Livermore, who makes a visual component proposal stage strong, It manifested from the very beginning of the opera, when it is running the overture, showing at the same time, the image of the face of a statue party, which is becoming a face Idomeneo, aging rapidly, and one of whose eyes the camera to show delves an astronaut wandering through space (clearly inspired by the famous film 2001, an odyssey of space Stanley Kubrick) for, then, another image displayed at the bottom of a platform appears space launch, and in the foreground, Idomeneo figure saying goodbye to a child Your child Idamante! This series of images coincide with the implementation of the overture to the opera, and this That's a personal opinion- You can distract the viewer to concentrate on hearing the brilliant music that is playing.

strong visual component that is maintained throughout the representation, with projections, one reiterative both, a calm sea, or rough with large waves breaking against cliffs and reach a beach, which is continued on the stage itself, with a sheet water present during the entire performance. The scenery is completed by metal platforms that become gateways where roaming characters like Elettra, Modern lecterns or those used by Idamante and Idomeneo to address his subjects.

Aesthetics 2001, an odyssey of space, again present at the end of the opera: first, when the voice of the oracle is heard and appears elegant room dieciochesca, It is returning to look at the final moment of the opera, and all the symbols used by Kubrick in his film: monolith, fetal bags and a character moving towards Idomeneo for both merge into a hug mortal. Although, actually, Idomeneo not die in history, only abdicates in favor of his son Idamante. Successful lighting created by Antonio Castro, It produces beautiful effects that enhance the visual appeal stage.

Highlight the work of Mariana Fracasso as designer clothing, disparate and timeless, It is including spacesuits, mythical Greek warrior costumes, in contrast to modern uniform soldiers and police. Y, in the case of Elettra, the sumptuous model that exhibits in its scenic entrance, compared to the other dressed in a miniskirt and boots used in Act II.

But, the essential part of Idomeneo is its brilliant music, served by a sumptuous orchestral fabric. Here I had a very outstanding performance Fabio Biondi in front of the Orchestra of Valencia, which again demonstrated its high quality and from the same execution of the overture, with splendid sound rope developing a theme that resembles the violent ocean waves, and it will reappear repeatedly in different moments of the opera. Biondi great work in the recitatives: many with orchestral accompaniment that make authentic ariosos. The orchestral sound of greatly looks on the bright marches and in its various interventions with the choir, especially, In between the first two acts, imposing the final Act II, and the concluding opera. Highlight the conciliatory work of Fabio Biondi, since the orchestra is not limited to emphasize and complement the voices, but go above and ahead of them. Finally, point out the great orchestral performance in the execution of the brilliant ballet music (Chaconne), closing the representation, as well as other small ballet: “The dance of the Cretan women ", in this production resumed interprets the representation, after intermediate produced, during Act II, at the end of the aria from Idomeneo "Fuor del mar".

Outstanding performance Gregory customer as Idomeneo, already evident in its scenic entrance, in Act I, with recitative "Here we are at last saved" followed by the aria "Vendromi around" well sung, alternating moments of intense lyricism with other accents full of bravos. His performance is superb in the beautiful cavatina with chorus, marked by sound of the string pizzicato "Acogli, oh kings of mar " belonging to Act III, or that warm final speech "Peoples, to you the last law ". Kunde faces notably the famous aria from Act II "Fuor del mar", especially in passages requiring a song full bravura, or wearing his magnificent record high on the scale ascending to ending aria, where if naturally emits followed by do4. Has some difficulties in the passages adorned profusely dotting this aria and require great vocal agility. The young soprano Brazilian Lina Mendes, it is too light in her role as Princess Ilia troyana, but it offers its pleasant timbre, with good projection and excellent mastery of agility; Y, It showed, in each of his lyrical interventions: at the very start of the opera, to the performing expressively and delicate accents "Father, Germni, goodbye". Showing an excellent line of singing in her aria from Act II, "If the father I lost". His best time is produced fronting the beautiful and delicate aria "Zeffirelli flattering" Act III. In the role of Idamante, the middle veteran Monica Pods, He showed a high degree of expressiveness, although the voice was small and low projection, and this is apparent in her duets with Lina Mendes Ilia. Only proved correct interpretation of the first of its arias of Act I "I do not blame, and I condani ", improving its performance in the second "The father adored", sung with strong accents marked by the rapid pace of the orchestra. Bacelli got his best moments in the recitative-duet with Idomeneo in Act III "Father, My dear father ".

Elettra is the best dramatic character definition of the whole work, and he found an excellent performer in the Valencian soprano Carmen Romeu, beautiful and resounding voice, well managed. He made a great performance, full of theatricality in his big scene in Act I, which begins with the recitative "Extinct is Idomeneo", whose orchestral accompaniment gives a character of arioso, with a song full of anger and tension, whose tone will crescendo in the aria full of difficulty "All I hear in my heart", expertly solving octave jumps and excellent command of agility. And in Act II, His voice was warm accents in the recitative-aria "Who would I try my sweetest pleasure……Idol mio, if backwards ", with a beautiful form of dance music, where the singer showed full intention fraseo, in perfect harmony with orchestral music. Carmen Romeu's performance had its climax in the aria "D'Oreste, of Ajax " Act III, where he again offered that wild and crazy song of Act I, dominating a fiendish coloratura, with complex vocal inflections, where he showed a broad fiato. Some sharp suspenders did not dampen somewhat the excellent performance Valencian soprano.

This opera contains two pages of beautiful invoice: the trio of Act II "Men in partir, Oh God" which involved Idomeneo, Idamante y Electra, with the quartet of Act III of the Act "I'll go and just wandering", sung by Idomeneo, Idamante, Ilia y Electra, well resolved in both cases by singers, although imbalance between the great voices of Gregory Kunde and Carmen Romeu compared to smaller Lina Mendes and Monica Bacelli. Emmanuelle Faraldo in the paper Arbace, He showed in his aria in Act II "If your grief", a voice excessively ugly light and buzzer, although with ease in the upper register. Performances Alejandro López Y Michael Borth, respectively interpreting Voice and High Priest of Nettuno, no discrete passed.

Great performance of the Choir Generalitad in its numerous interventions: in Act I "Let us enjoy peace" festive tone dialing and “Pieta! gods mercy!” with glistening effect the chorus divided into two parts that produce sounds near and far. And in Act II, the beautiful "Placido is the sea" and imposing "What new terror" Y "Let's run, flee”. In Act III, the impressive "Oh tremendous vote" and the concluding opera "Get out Amor, fall Hymen ", with magnificent concatenation of choir and orchestra. The performance of the Ballet of the Generalitad “Chaconne” closing the representation, He was somewhat lackluster, to having its components to dance, with obvious difficulties, on the sheet of water in stage.

These performances of Idomeneo has been devoted to the memory of the director Nikolaus Harnoncourt, recently deceased, and great student of this score.