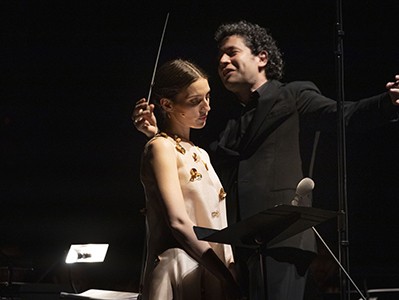 Last 10 August took place andn the Auditorium of Peralada, an extraordinary concert with the performance of the Mahler Chamber orchestra & Friends directed by Gustavo Dudamel (Barquisimeto, Venezuela, 26 of January of 1981), with a program that included in the first part A midsummer night's dream (Full version) Felix Mendelssohn, with the intervention as narrator of the actress María Valverde, currently married to Gustavo Dudamel, that gave the concert an added expectation. In the second part, an impressive performance of the symphony No. 1 (The Titan) from Gustav Mahler.

Gustavo Dudamel is one of the great current conductors, whose dizzying career began in 2004, when he won the first prize in the Gustav Mahler Directing Competition. Since then it has triumphed in the main concert halls around the world, conducting prestigious orchestras. Since 2009 to date he is the principal conductor of the Los Angeles Philharmonic Orchestra. It was in 2017, the youngest conductor of the famous New Year's Concert in Vienna. His career is closely related to Gustav Mahler, of who has come to direct all his symphonies.

Drawing inspiration from his musical and pedagogical experiences, I believe in 2012, the Gustavo Dudamel Foundation, a charity whose goal is to seek access to music as a human right and as a catalyst for learning, integration and social change.

The Mahler Chamber Orchestra was founded in 2007 by Claudio Abbado, based on the shared vision of its members in being a free and international group, dedicated to creating and sharing exceptional experiences in classical music. Its base template is 40 musicians of 20 countries, to which other young musicians are added incidentally, on his tours of Europe and the rest of the World. An educational agreement between the Gustavo Dudamel and Mahler Foundations, has made possible the preparation of this symphony No. 1 Mahler, that has been heard in Peralada.

The dream of a nigth of summer Felix Mendelssohn (Hamburg, 1809 – Leipzig, 1847), is a stage music based on Shakespeare's play, whose premiere took place in Potsdam on 14 October 1843, accompanying a performance of the play. The "Overture" had already been written by Mendelssohn, in 1827, when the composer was barely eighteen. In the present concert, Dudamel's baton transmitted in the “Overture” a great sonic brilliance from all the orchestral sections., highlighting at the beginning the slow and luminous chords of the wood that give way to the caressing sound of the string. Magnificent the interventions of the horns and the rest of the brass instruments. In the "Scherzo" the sound of strings and woods stood out., especially the solo of the solo flute with which this movement concludes. Truly brilliant was the interpretation of the delicious song "You Spotted Snakes", introduced by the lucid interventions of clarinets and bassoons, followed by a flute solo, which gives entrance to the magnificent interventions of the soprano Mercedes Gancedo and the mezzo Lídia Vinyes-Curtis, with members of the L’Orfeó Català women's choir, with direction of Buia Reixach i Feises. At the "Intermezzo", melodic motifs are produced where woods and string shone. In the "Nocturno" the interpretation of the horns as well as the strings and flutes was magnificent.. In the well-known “Wedding March”, the interventions of three trumpets and three trombones shone greatly., along with the rest of the orchestra. In the "Fanfare and Funeral March", they had a lucid clarinet and bassoon performance talking about the percussion of the timpani. In the "Dance of the clowns", the “orchestral tutti” shone at a frenzied rhythm, with occasional solo interventions of the clarinets along with the oboes and occasionally the tuba. Preceded by the sound of the flute and horns, the solo singers and the choir performed again very brilliantly, performing "Through the House".

Parallel to the magnificent orchestral performance, A series of cartoon image projections were produced, that seemed taken from a fairy tale, but they do not contribute almost anything to the interpretation of the work and they even distract the public from what is really important: listen to the wonderful music of Mendelssohn. The presence as narrator of the actress María Valverde, It was quite discreet; visibly nervous, read the text, at times, with little clarity, without having memorized it properly, for authentic emphasis.

Gustav Mahler (Kaliste, Bohemia, 1860 - Vienna, 1911) conceived his first symphony as a long symphonic poem in two parts and five movements, whose premiere took place in Budapest, in 1889, with the composer's own direction and that was a real failure. Mahler performed a major revision, turning the original work into a symphony in four movements, whose premiere he directed in Berlin, in 1896, being the one that is usually heard habitually.

As a great Mahlerian interpreter, Gustavo Dudamel got an impressive orchestral response, with performance truly on the edge of the different sections, with a sumptuous string, next to a very bright sound of the woods, especially the oboe soloist in his numerous interventions throughout the work. Highlight the vibrant and unusual fanfare of clarinets, in the first movement “Langsam, dragging (Like a sound of nature). But, especially, It is worth noting the very fine sound of the numerous set of brass instruments, formed by seven tubes, four trumpets, three trombones and tuba, emerging with tremendous power in perfect conjunction with percussion, strings and woods in the numerous "orchestral tutti", that mark this score, especially in that imposing start of the fourth movement "Stürmisch bewegt (Tormented, hectic)”, and in the long concluding coda of the symphony. Inside a very high interpretive level, noteworthy is the execution of the third movement, esa “Trauermasch (Funeral march)”, which begins and ends with the famous melody "Frere Jacques", interpreted in canon form, and started with the faint sound of the timpani, to which the solo cello is incorporated, and it is being taken up by the fagots, the cello ensemble and the tuba. The melody reappears fleetingly to showcase clarinets, bassoons and horns, and it is once again the conclusive theme of the movement with the sounds of timpani, bassoon and violin in pizzicato, that are fading until they disappear. Great performance by Gustavo Dudamel and La Mahler Chamber Orchestra in Peralada.