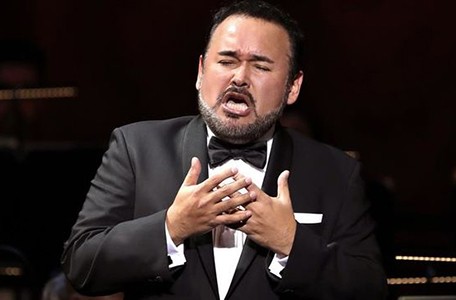 Who was not afternoon 19 November in the Teatro de la Zarzuela, You may have missed one of the lyrical events of the season. It was the first time the Mexican tenor boarded a recital composed entirely of zarzuela. A genre that is historically considered "minor" Javier Camarena was in charge of denying: "I do not understand this tendency to make the zarzuela a minor genre, Does not have it, I can not find it, I don't perceive it like that and I'm not going to project it like that. Singing Red Flower is as important to me as singing A furtive tear ".

Greeted on stage with a standing ovation, started nervous, as he himself recognized, "I have left my comfort zone and I want to do my best". And I already think it did. It was demonstrated in each of the eight romances he performed, that this is a genre for seasoned. It requires a quality instrument, as is without a doubt that of Camarena, domain of dynamics, taste in the interpretation and an appropriate reading of the strength and tradition that this genre contains. His lyrical-light tenor voice offered versions full of originality. Solving the difficulties that these seemingly affordable arias undoubtedly have, giving everything in the interpretation. Going through different registers without losing metal, shining in the treble, with a phrasing loaded with intention and a smooth line of singing.

He began with bravery interpreting "From this peaceful corner of Madrid", by Luisa Fernanda and "You know through the smoke", by Doña Francisquita, to continue with one of your favorite works in this repertoire, "Red flower", by Los gavilanes. Before interpreting it, he warned the audience that he had "something scratchy in his throat". It was noticed at some point, given the difficulty, for the subtlety in the interpretation, that treasures this romance. Hope it rains soon, or many singers will stop coming to Madrid.

The second part began with a "Goodbye Granada" full of feeling and emotion that he dedicated to "Paquita", tenor wife Pedro Lavirgen, recently deceased, since it was the version of Lavirgen in which he was inspired to prepare the romance of the Emigrants.

It ended with “Paxarín, you who fly ”and“ It can't be ”, that ended with an over-treble that led the audience to delirium. At the head of the Orchestra of the Community of Madrid the young man Iván López-Reinoso. He conducted with ease and rhythm the Prelude to La revoltosa and El Drum de Grenadiers, the Interlude of The Wedding of Luis Alonso and the Intermission of The Legend of the Kiss. Brilliant was also the tip of the Mexican teacher Arturo Márquez, Danzón no. 2.

The recital ended with another two tips, a "Granada", from Agustin Lara in which he wasted qualities and treble and the repetition of the “The Trust of the Tenorios”.

Extraordinary evening that ended with a very long standing ovation from an enthusiastic audience that was reluctant to leave the room. We hope to see Javier Camarena soon performing an opera or zarzuela from the Spanish repertoire in this same Theater.