Julia Lezhneva at the Peralada Festival 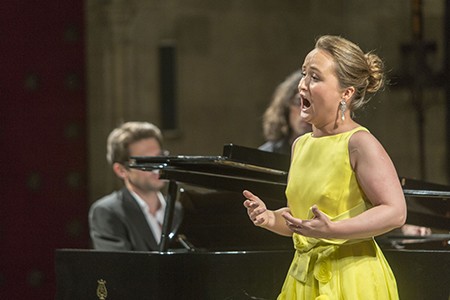 The Castell de Peralada Festival, He held its thirty-one edition, offering a varied program that included several opera recitals, among them, those offered by the young Russian soprano Julia Lezhneva and veteran American tenor Gregory customer, which they took place respectively on 5 Y 6 August in the Church of Carmen de Peralada.

Julia Lezhneva (Sakhalin Island, Russia, 5 December 1989) It is one of the great figures of the current lyric. Specialist baroque repertoires, Mozart y rossiniano. His meteoric career is proving, since inaugural gala performance at the Rossini Festival in Pesaro in its edition 2008, when he was only seventeen years. In May 2010 He was invited by Kiri Te Kanawa to the gala awards "Classical Brit Awards" at London's Royal Albert Hall. The big New Zealander soprano said in presenting it: "Occasionally a truly exceptional talent appears and I think Julia Lezhneva is just that. The brightness of the voice and technique deeply impressed ". In October 2010 She came his triumph at the International Opera Competition in Paris, and since then his career has gained special relevance, acting in numerous recitals worldwide, and interpreting different operatic roles as Asteria Tamerlano Handel, directed by Mark Minkowski (one of his mentors) which marked his debut at the Salzburg Festival 2012. He has sung Rosina The Barber of Seville Rossini, and Mozartian roles as Fiordiligi in Così fan tutte and Zerlina of Don Giovanni with which he debuted last June at the Liceu in Barcelona.

Beautiful voice timbre and extraordinary capacity for coloratura, with excellent fraseo. All this was evident in his recital of Peralada, accompanied on piano by Mikhail Antonenko. He began the program with the very difficult aria "agitata da due venti" opera Griselda from Antonio Vivaldi, where he showed real virtuosity with absolute mastery of singing agility and a safe and limpid issue, only altered by any acute or forced some difficulty in octave jumps somewhat contrived serious. As a counterpoint to this aria dominated by vocal pyrotechnics, singer shone greatly in his next intervention "Carmelitarum confirmet ordinem ut ... .or nox dulcis" motet Let the region between rigpray for Händel, where he shone his voice truly angelic, truly dream, especially in the final section of "The nox dulcis, Seren quies "with great sound regulations and an almost unquenchable fiato. In the recitative-aria "Rejoice, Cry from the heart to the heart of a lover ... ..Care "by motete Bright star in the sky from Nicola Porpora, again he showed his virtuosity, although with a line of singing some expressive monotony. Highlight its interpretation of "Alleluia" concluding aria, with a brilliant resolution of coloratura, highlighting the performances of chopped-linked notes. The first part of the concert ended with his interpretation of the Andante "Your virginum, crown "followed by final Allegro" Alleluia "belonging to motete exult, Jubilate from Mozart, making a good interpretation of the Andante, with excellent phrasing and superb execution of trills, again showing his mastery in resolving the complex coloratura of "Alleluia" final.

Ya, in the second part, he played Venetian Regatta, set of three songs: "Anzoleta forward the regatta", "Anzoleta co passes the regatta" y Anzoleta after the regatta ", Rossini composed to 1857, text attributed to Francesco Maria Piave in Venetian dialect. In its interpretation, Lezhneva continued to exhibit its pristine ridge line, though lacking the necessary expressiveness, to show humor and wit are requiring Rossini songs. then, He addressed three lieder Franz Schubert: "Night and dreams", "The young Nome" y "in the spring", well sung, with a good idiomatic domain, but without the necessary style and expressiveness that require these works. His best performance came in the beautiful "Im Frühling", excellent rapport with voice and piano.

Ya, at the conclusion of recital, Russian soprano returned to shine greatly in the beautiful aria 'Tanti affetti "of La Donna del Lago from Rossini, excelente tied with domain of singing, and a magnificent fraseo, highlighting, interpretation of the end section "father Fra il, and between lover ", introducing the relevant changes in its four repetitions. Good performance by pianist Mikhail Antonenko, as accompanist and solo performances of their Game No 2 from Johann Sebastian Bach and the impromtu nº 3 from Franz Schubert.

Before the continuous applause, the singer gave three encores, The first aria of Baroque composer Carl Heinrichs Graun, content recording his latest album, He repeated the "Alleluia" the motet Porpora, to conclude with the beautiful song "Daisies" from Sergei Rachmaninov.