Paloma Sanz Posted on November, 2020 Posted in Features Tagged with Carlos Alvarez, The one with the bunch of roses, Pablo Sorozábal, Teatro de la Zarzuela, Zarzuela 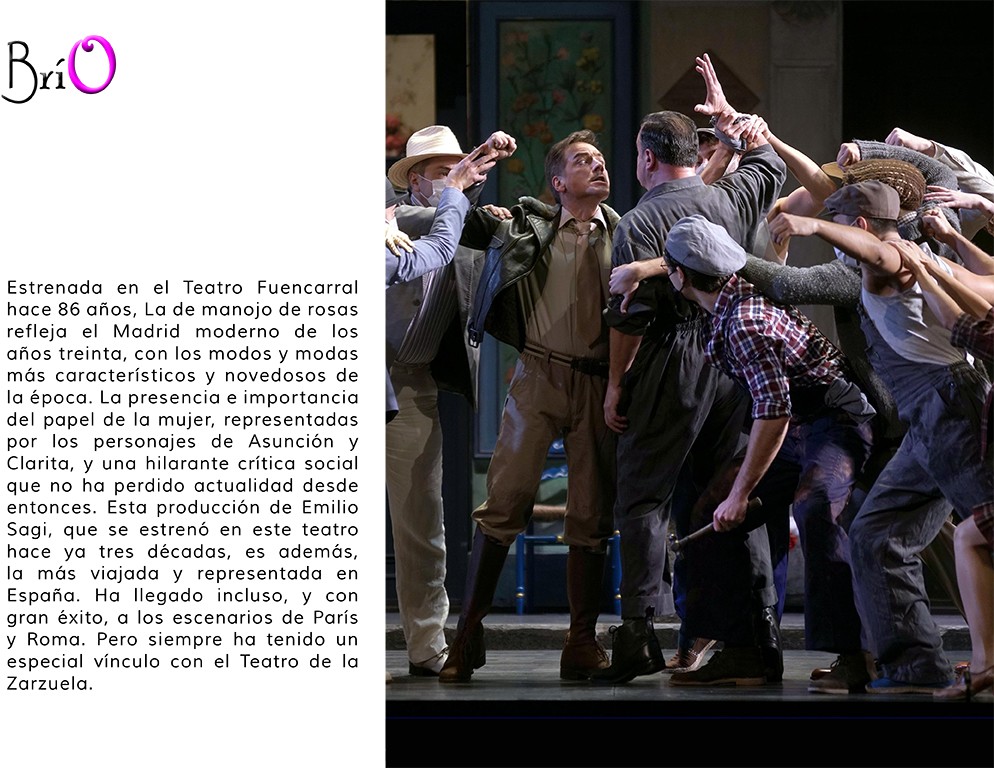 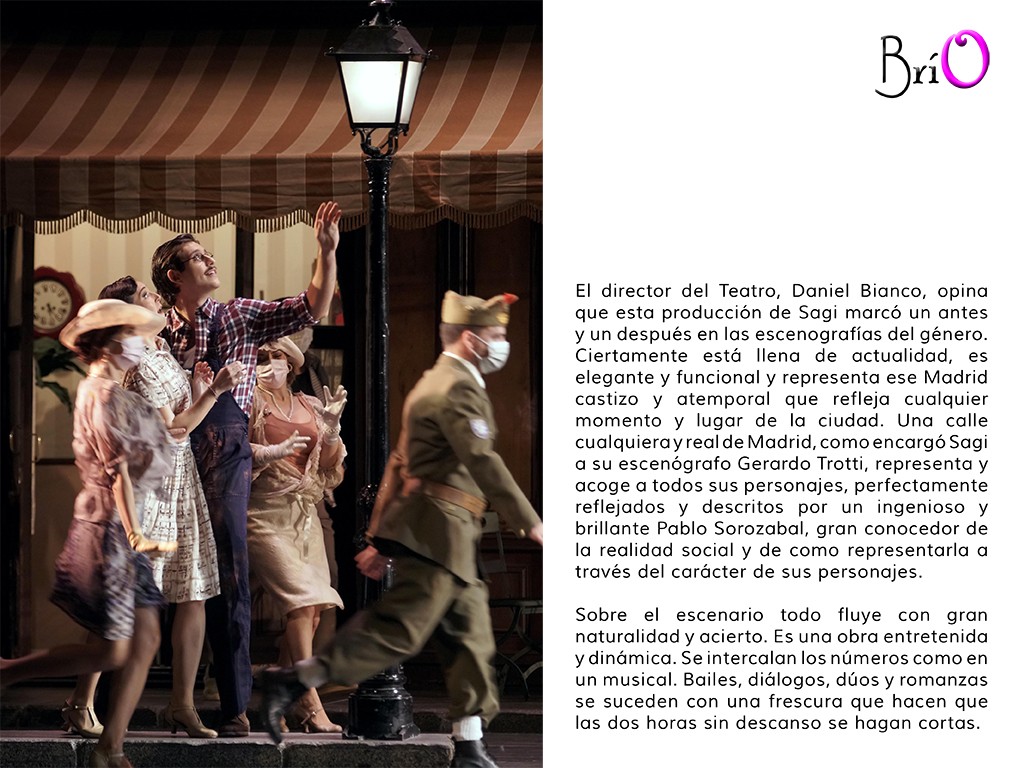 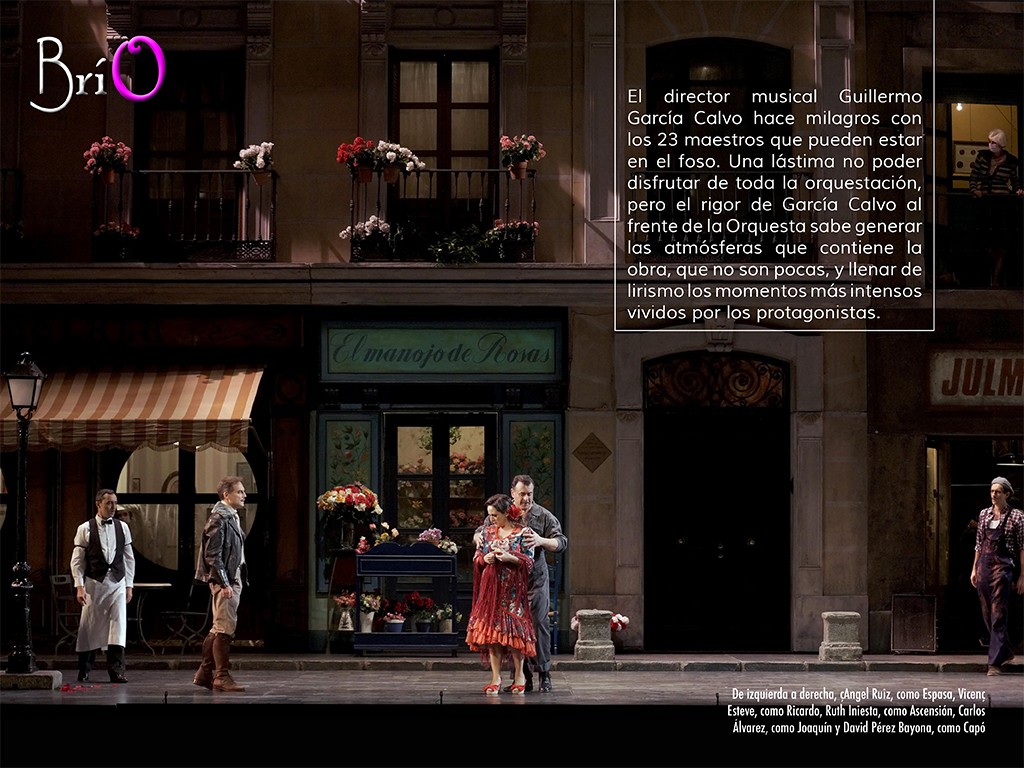 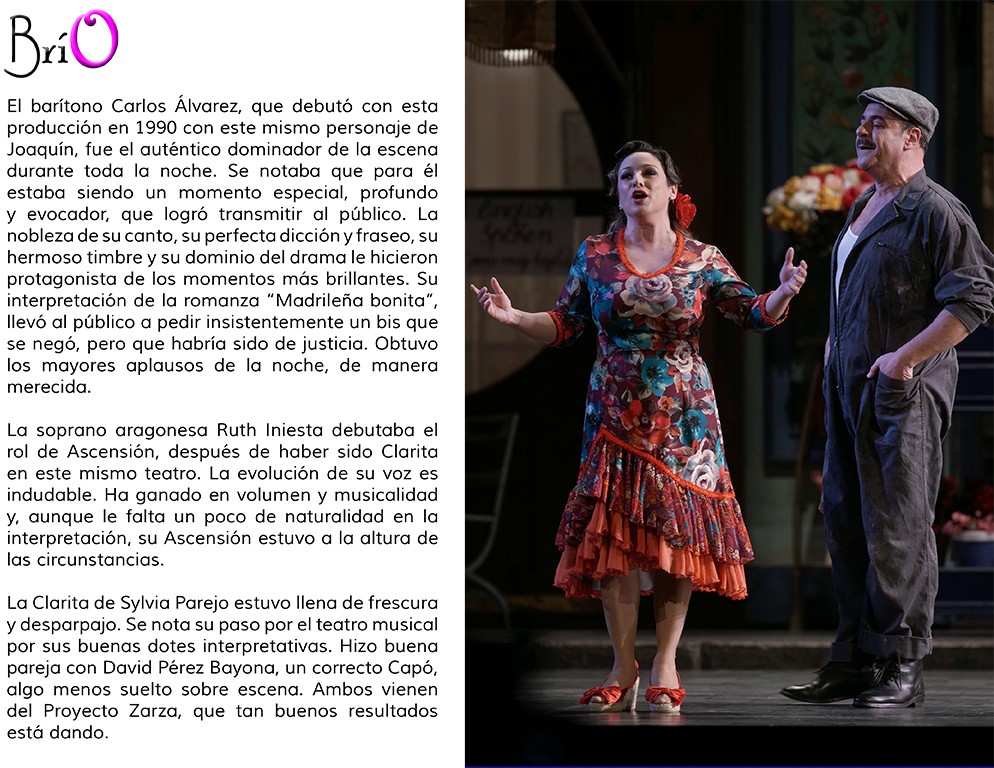 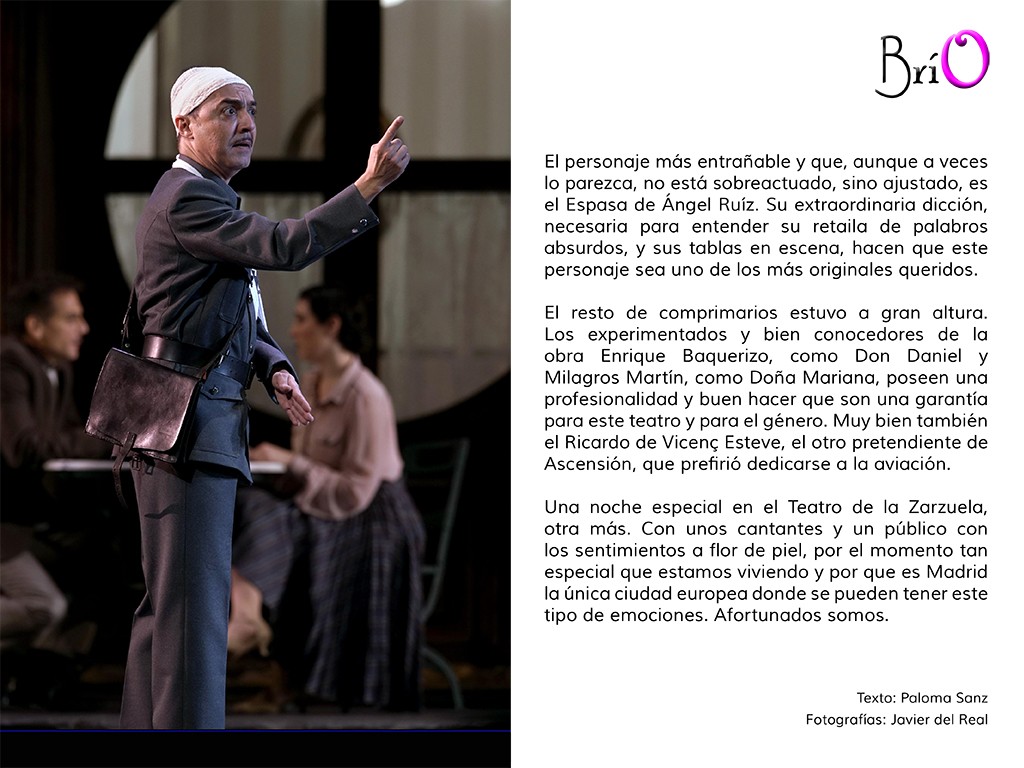 The one with the bunch of roses
Pablo Sorozabal
Libreto by Francisco Ramos de Castro and Anselmo Cuadrado Carreño
Premiered at the Fuencarral Theater in Madrid, he 13 November 1934
Production of the Teatro de la Zarzuela
D. musical: Guillermo García Calvo
D. scene: Emilo Sagi
Scenography: Gerardo Trotti
Locker room: Pepa Ojanguren
Lighting: Eduardo Bravo
Choreography: Goyo Montero
Choreographic replacement: Nuria Castejón
Orchestra of the Community of Madrid Owner of the Teatro de la Zarzuela
Holder Choir Teatro de la Zarzuela
Director Antonio Fauró
Distribution: Ruth Iniesta, Carlos Alvarez, Stephen Vincent, David Pérez Bayona, Sylvia Parejo, Ángel Ruiz, Milagros Martin, Enrique Baquerizo, Cesar Sanchez, Eduardo Carranza, Joseba Pinela, Daniel Huerta, Alberto Rios, Francisco Jose Pardo, Rodrigo Alvarez, Alberto Camon, Roman Fernández-Cañadas, Francisco Jose Rivero.
Dancers-extras: Begoña Alvarez, Cristina Arias, Ariel carmona, Lara chaves, Emmanuel Chita, Sarah Croft, Maria Angeles Fernandez, Alberto Ferrero, Antonio Gomez, Rafael Lobeto, Maria Lopez, Helena Martin, Xavi Montesinos, Daniel Morillo, Luis Romero, Esther ruiz, Lara Sagastizabal, Nathan Segado, Rosa Zaragoza, premiered at the Fuencarral Theater 86 years, The bunch of roses reflects the modern Madrid of the thirties, with the most characteristic and novel modes and fashions of the time. The presence and importance of the role of women, represented by the characters of Asunción and Clarita, and a hilarious social critique that has not lost its relevance since then. This production by Emilio Sagi, that premiered in this theater three decades ago, It is also, the most traveled and represented in Spain. Has even arrived, and with great success, to the stages of Paris and Rome. But he has always had a special bond with him Teatro de la Zarzuela.The director of the Theater, Daniel Bianco, thinks that this production of Sagi marked a before and after in the scenography of the genre. It is certainly full of topicality, It is elegant and functional and represents that authentic and timeless Madrid that reflects any time and place in the city. An ordinary and real street in Madrid, as commissioned by Sagi from his set designer Gerardo Trotti, represents and welcomes all its characters, perfectly reflected and described by an ingenious and brilliant Pablo Sorozabal, great connoisseur of social reality and how to represent it through the character of its characters.

On stage everything flows with great naturalness and success. It is an entertaining and dynamic work. The numbers are interspersed like in a musical. Dances, dialogues, Duets and romances follow each other with a freshness that makes the two hours without a break short.

The musical director Guillermo García Calvo works miracles with the 23 teachers who may be in the pit. A pity not to be able to enjoy the whole orchestration, but the rigor of García Calvo at the head of the Orchestra knows how to generate the atmospheres that the work contains, which they are numerous, and fill the most intense moments experienced by the protagonists with lyricism.

The baritone Carlos Álvarez, that debuted with this production in 1990 with this same Joaquín character, he was the real dominator of the scene all night. You could tell that for him it was being a special moment, deep and evocative, that he managed to transmit to the public. The nobility of his song, his perfect diction and phrasing, his beautiful timbre and his mastery of drama made him the protagonist of the brightest moments. His interpretation of the romance "Madrileña bonita", led the public to insistently request an encore that refused, but what would have been justice. Got the biggest applause of the night, deservedly.

The Aragonese soprano Ruth Iniesta debuted the role of Ascensión, after having been Clarita in this same theater. The evolution of his voice is undoubted. Has gained in volume and musicality and, although it lacks a bit of naturalness in the interpretation, his Ascension rose to the occasion.

La Clarita by Sylvia Parejo was full of freshness and self-confidence. His time in the musical theater is noted for his good acting skills. He made a good couple with David Pérez Bayona, a correct hood, something less loose on stage. They both come from the Zarza Project, how good results is it giving.

The most endearing character and that, although sometimes it seems, it's not over-acted, but adjusted, It is the Espasa of Ángel Ruíz. His extraordinary diction, necessary to understand his string of absurd words, and his tables on stage, make this character one of the most original ones.

The rest of the tablets were at great height. The experienced and well-versed Enrique Baquerizo, as Don Daniel and Milagros Martín, as Doña Mariana, They have a professionalism and good work that are a guarantee for this theater and for the genre. Very good also Ricardo de Vicenç Esteve, the other suitor of Ascension, who preferred to dedicate himself to aviation.

A special night at the Teatro de la Zarzuela, one more. With some singers and an audience with feelings on the surface, for the special moment that we are living and why is Madrid the only European city where you can have this type of emotions. Lucky we are.
Text: Paloma Sanz
pictures: Javier del Real