The Villana in the Teatro de la Zarzuela 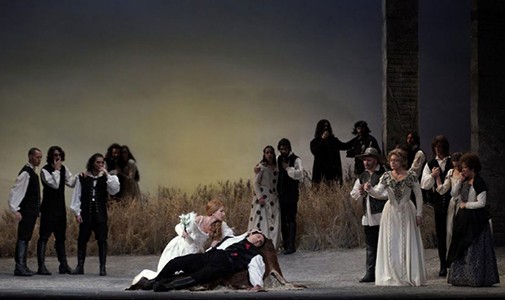 Thirty-three years have passed since the last performance of the villainess at Teatro de la Zarzuela. And it not explained very well that much time has elapsed in the case of a work of so much substance in the genre boy. And even less is understood if we take into account that the music belongs to the teacher Amadeo Vives, and that is based on the work Peribáñez and the Commander of Ocaña, from Lope de Vega.

It is therefore a work that has all the elements to undertake a plan more ambitious than a zarzuela. But maestro Vives remained halfway through that Spanish operatic dream. And not for lack of quality in the score, quality has, and a lot.

She is such a villain, beautifully made, contains some moments of delicate lyricism that the master Miguel Ángel Gómez Martínez manages to extract from an Orchestra to which the work is something great. Even so, the orchestra sounded homogeneous and more elaborate than on other occasions.

The difficulty and demands of this work for the main roles are noticed from the first moment. Important voices are necessary to cope with a well-elaborated score with great vocal and dramaturgical demands.. The Theater has counted on this occasion with two castings. Without detracting from the first, maybe it was the second cash who has been most successful in the general reading of the work. the soprano Maite Alberola, with a round and voluminous voice, He knew how to fill the character of Casilda with the Castilian character of this prudent woman. He offered some moments of great beauty interpreting the romance "The brown cloth cape", or his beautiful duet with Peribáñez.

baritone César San Martín played a static, but full of nobility, Peribáñez. He participated with elegance and feeling in the most beautiful duets with Casilda.

The Don Fadrique of Andeka Gorrotxategi it was a big surprise. This young Biscayan tenor has a vigorous instrument, of attractive timbre and taste in interpretation.

The theater choir, well stamped and pasted, had a relevant performance, becoming a main character.

Also noteworthy is the corps de ballet that completed the simple but beautiful scenography of Natalia Menéndez. With the evocative field of spikes as the protagonist throughout the work. Very successful lighting of Juan Gomez Cornejo, creating different atmospheres with the same scenic elements. And a good direction of actors who made more than seventy people unfold on stage in a coordinated and graceful way.

We must thank the bravery and effort of the Teatro de la Zarzuela offering such a high-level work in this ambitious season. Great evenings of good music are expected.