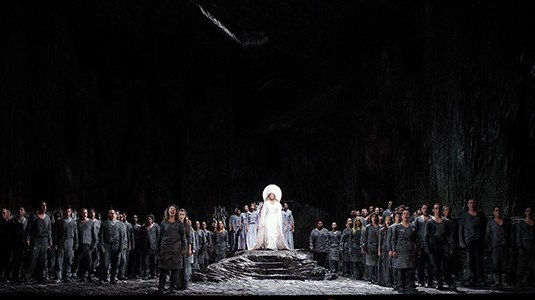 "This opera conquest throughout Europe in a very short time, and even Verdi attend, fascinated and hidden in a box, the premiere in Bologna, directed by his friend Mariani. The reasons are in sight: from a musical point of view, sounds are heard hitherto unknown, both the prelude and the desecration of the gods by Ortrud and narration about the Grail Lohengrin, and naturally one of the most complex choruses from Bach with the appearance Swan "ein Wunder, a wonder…". From the dramatic point of view, opera meets all the desires of the bourgeoisie then, Restoration disappointed by Metternich and the "juste milieu" of France; frustrated in his desire for a new world order, convinced of the special place of the artist but also his loneliness (Lohengrin), afflicted by melancholy arising from the frustration of unfulfilled utopia. And all this reflected in oversized forms and also used Meyerbeer, although this will fail to provide them with more than a similar efectismo the current Hollywood productions.
Lohengrin is an incredibly sad work, because at first it promises the realization of a new world and end, as Elsa, We abandon us to our loneliness, because society could not find the courage to follow the requirement of the artist, Utopian messenger Grail castle: "No I never interrogate". Elsa wants to know instead of believing, and therefore it can not be released, while Lohengrin must return to his ideal realm of the Grail castle alone ... as Wagner in exile. " (The eternal struggle between truth and glare Theater, Gerard Mortier).

Gerard Mortier's enthusiasm has led to the present Teatro Real, for the first time, own production of the most romantic work of Wagner, Lohengrin.
This is a work that develops all own archetypes of romance, the tragic fatality, the medieval legend, the contrast between the divine and the human and a dark and eerie atmosphere.
Like the ancient Greeks reality expressed through legends, Wagner, emulating the Greeks, He tried to express the universal truth also using legends. Where appropriate, medieval legends of German origin with one of the topics that most interest aroused in him, The Holy Grail.
Lohengrin is a work that marks a turning point in the music of his time, because it will trace the operatic style of the future. A novel instrumentation in which Wagner no longer up to the classic mode, but it creates different musical levels as shown significantly prelude, where the strings, They are divided and grouped creating a different sound, only, Wagnerian distinctive instrumental.
Wagner had to flee Dresden, where he planned the show opened, after participating in the Revolution 1848. Before he had left written all kinds of information on the orchestration and staging. For this new production Real, They have taken into account all these sources to be thoroughly faithful to the ideas of Wagner himself.
Some of these indications have been faithfully respected, as the appearance on stage of 12 trumpets, or the composition of an extraordinary chorus, by number of members and volume of sound.

The first thing that draws the attention of this production is the use made of the stage. Lukas Hemleb Y Alexander Polzin They have created a scenery away from the static sense we can imagine in a production of this size. The result is a totality, a romantic universe almost sculpted hands Polzin himself in his role as sculptor. They have achieved a particular balance, mystical and legendary, which can not be identified with any present time, not historical. It is out of time and fills a spontaneous form of sensitivity.
It was certainly the Master Hartmut Haenchen the most deservedly cheered after the performance. He managed Orchestra titular one of his best performances since the reopening of the Teatro. the overture, a tension and overwhelming intensity, only it surpassed by a final full of magnetism, It is transmitting the same work as a whole. The experienced German director, extracted orchestra sound full maturity, product of evolution that this body stable theater has experienced in recent years.

Coro del Teatro holder, Coro Intermezzo, strengthened to address the volume of sound required Lohengrin, He had an extraordinarily important role, especially the male choir. He moved around the stage like a living body unit, in the great cavernous stage. The quality of this choir, conducted by maestro Máspero, It never ceases to amaze. The quality achieved great places him among the best in Europe, something that may have to be thankful, as well, Gerard Mortier.

The set of key voices was balanced and a high level. the tenor Christopher Ventris, as Lohengrin, You can not qualify as a voice specifically wagneriana, but he contributed a heroic tone, plus a light metal which is always welcome in these characters. He lacked emotion in some passages but color has a beautiful voice.
Catherine Naglestad he played a very believable in their naivete Elsa. Sweet excess, It has a brilliant highs and expressive.
Deborah Polaski as Ortrud shone high. A magnificent dramatization made her the most evil far. He managed to be the protagonist in each of the duels he had with the other major voices. His experience on stage voice softened some lack, especially in the high notes.
Franz hAWLATI as King Heinrich has been a pleasant surprise. The German baritone has improved since his last speeches in this theater. This time his performance has been very correct.
Thomas Johannes Mayer, as Telramund, He had a flawless first act and a compelling dramatization. This German baritone possesses a powerful and deep voice filled with intensity their interpretations.

The end result is a round work, seeking total art that Wagner pursued his compositions. Do not get it, but the result is more than worth to pay tribute to his inspirational, Gerard Mortier one floating in the air.