Luisa Fernanda, or the indomitable desire to fight for beauty - Brío Clásica
↓ Skip to Main Content 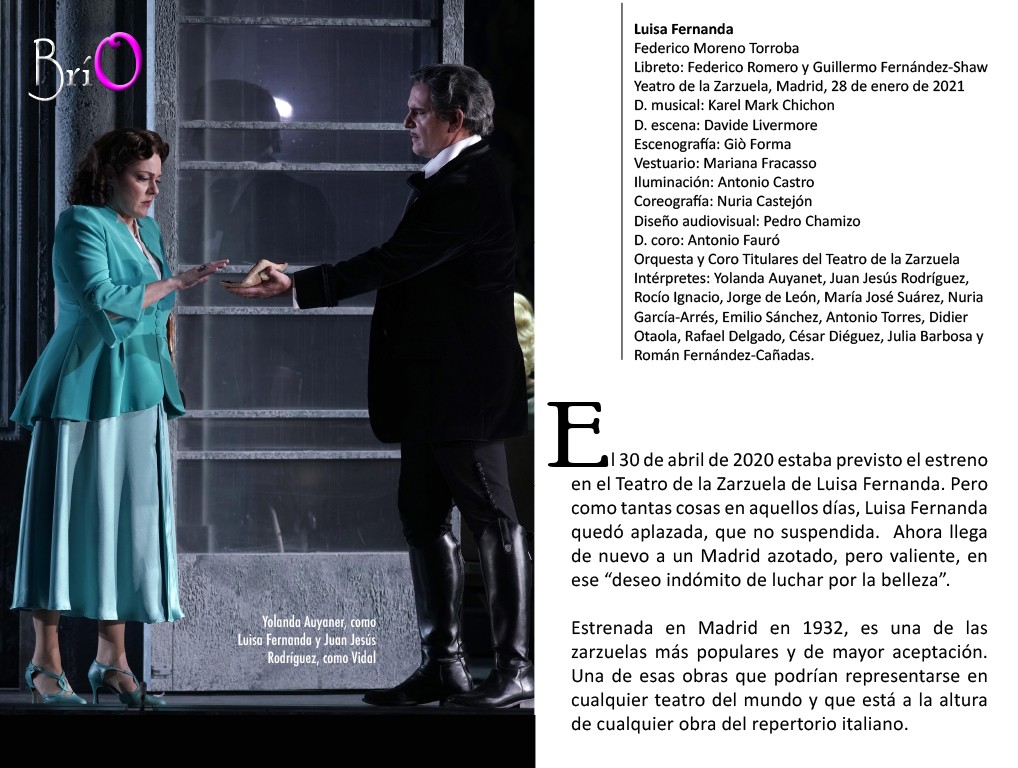 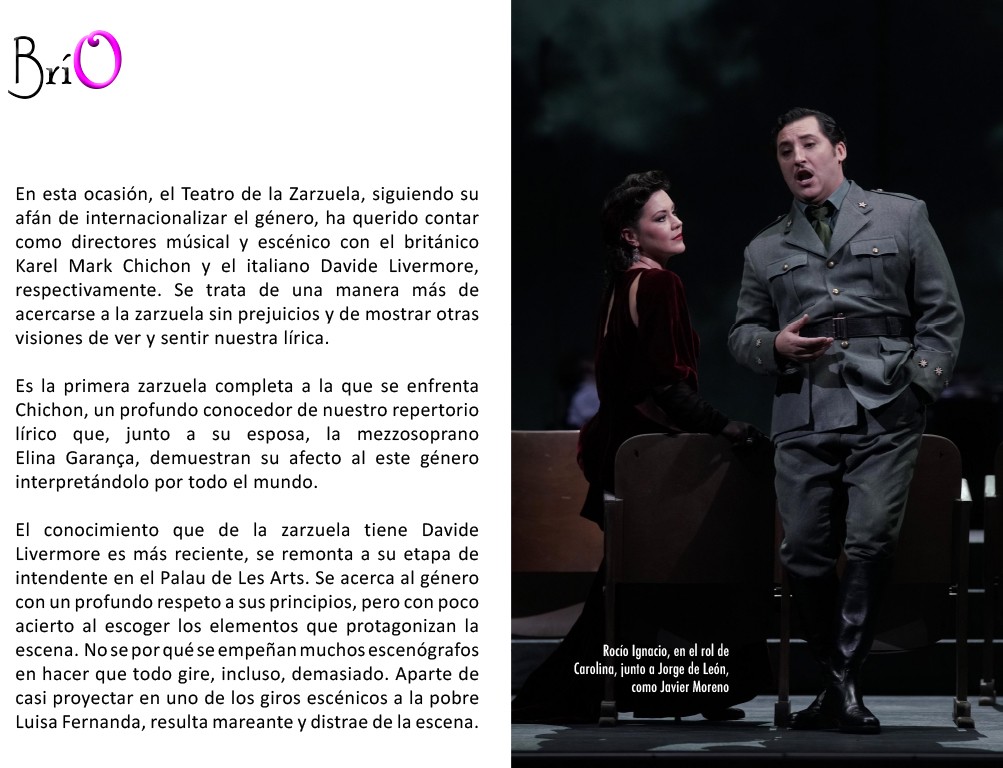 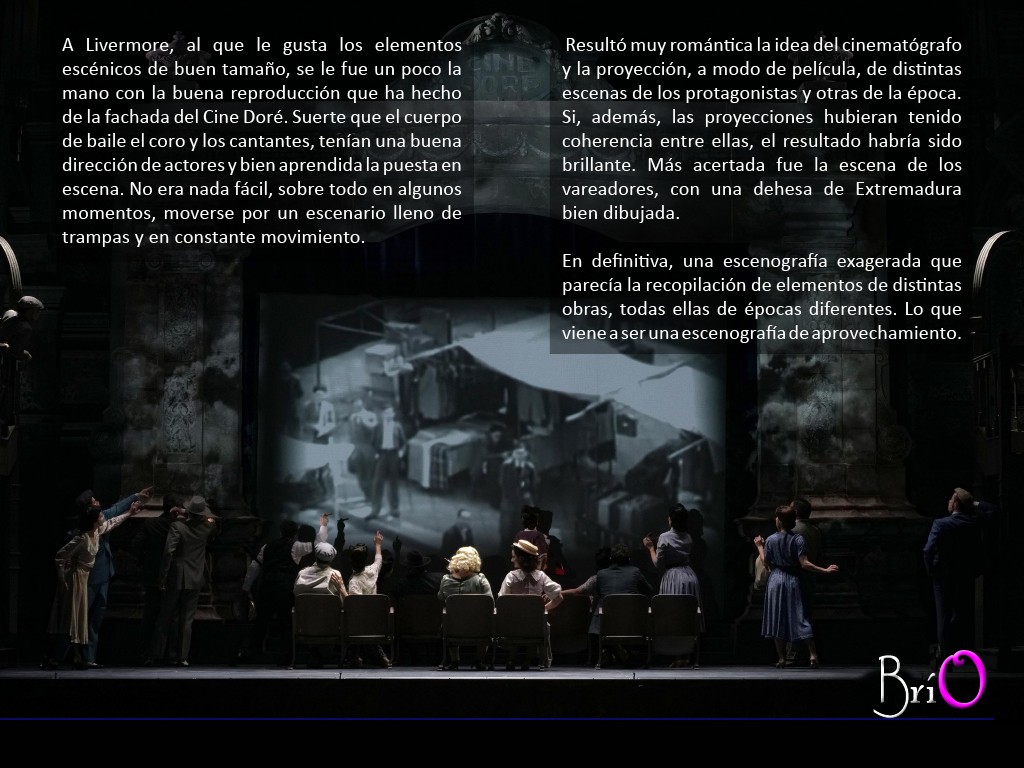 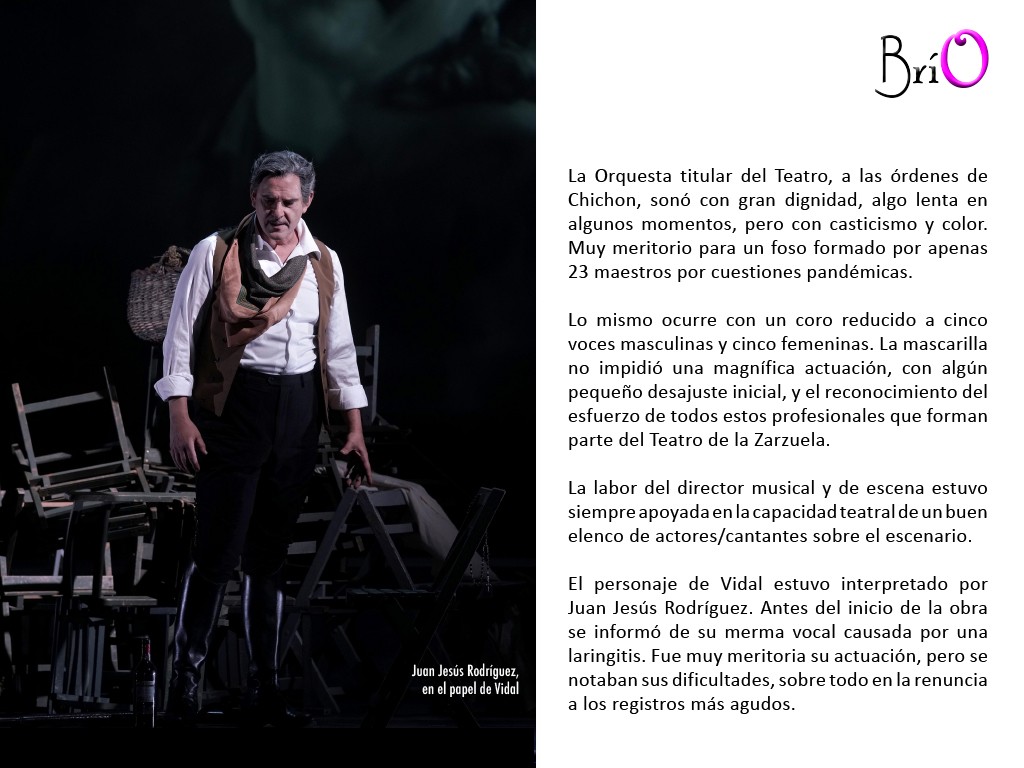 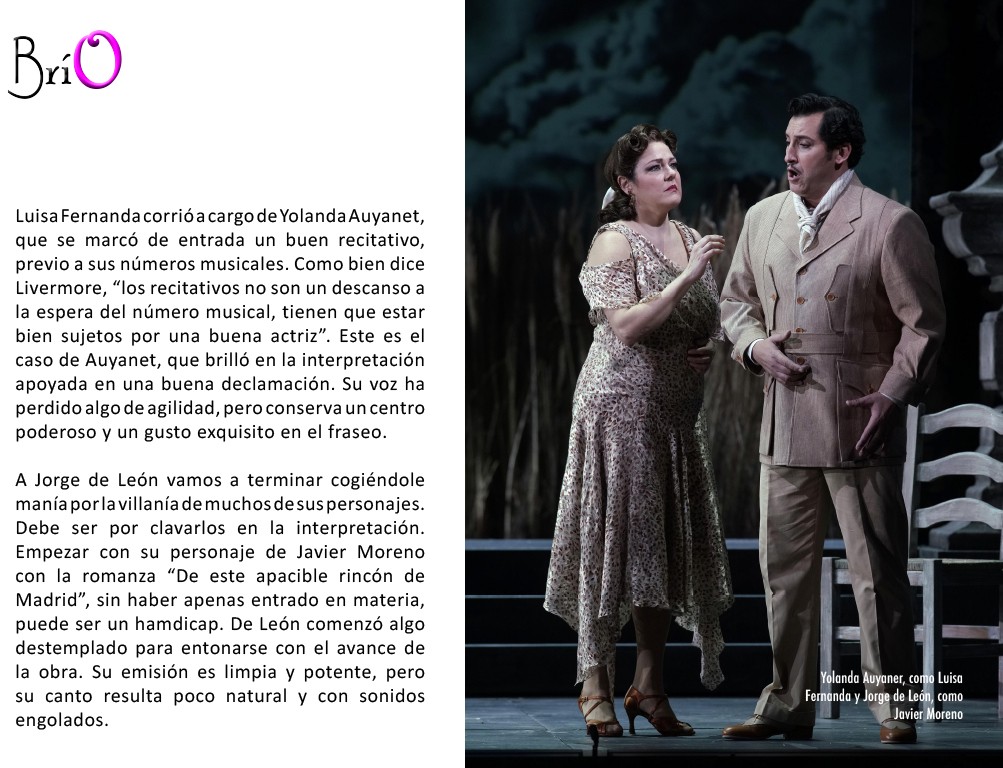 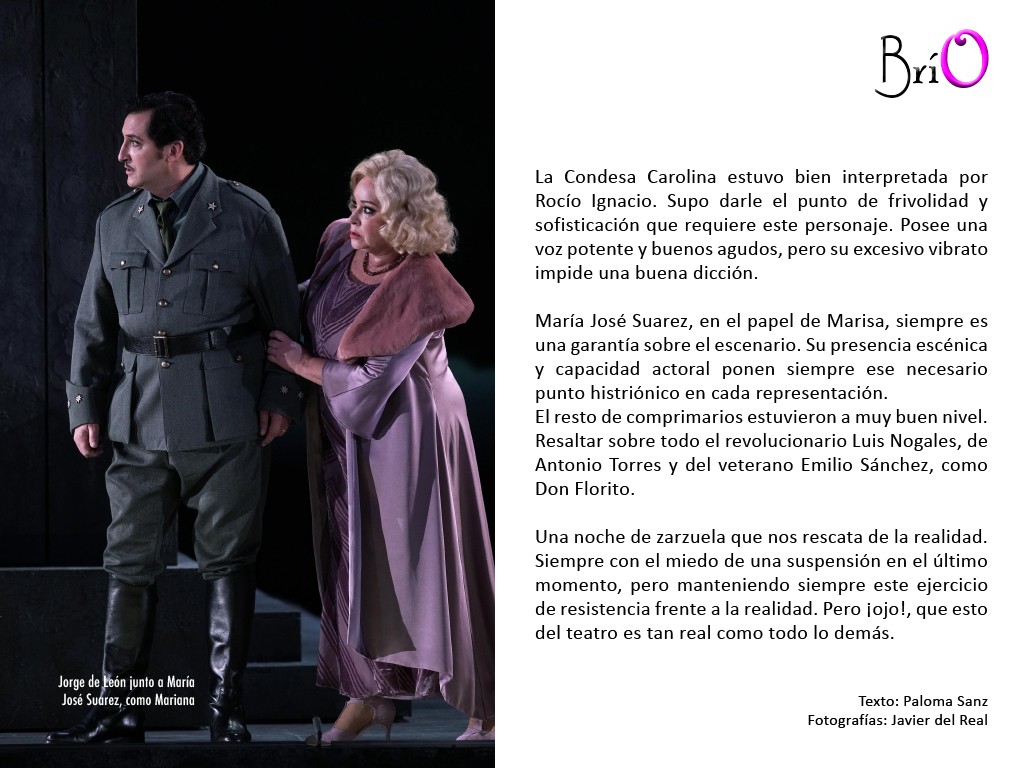 Luisa Fernanda, or the indomitable desire to fight for beauty
Luisa Fernanda
Federico Moreno Torroba
record: Federico Romero and Guillermo Fernandez-Shaw
Yeatro de la Zarzuela, Madrid, 28 of January of 2021
D. musical: Karel Mark Chichon
D. scene: Davide Livermore
Scenography: Giò Forma
Locker room: Mariana Fracasso
Lighting: Antonio Castro
Choreography: Nuria Castejón
audiovisual design: Pedro Chamizo
D. choir: Antonio Fauró
Titular Orchestra and Choir of the Teatro de la Zarzuela
interpreters: Yolanda Auyanet, Juan Jesus Rodriguez, Rocío Ignacio, Jorge de León, María José Suárez, Nuria García-Arrés, Emilio Sánchez, Antonio Torres, Didier Otaola, Rafael Delgado, Cesar Dieguez, Julia Barbosa and Román Fernández-Cañadas.
He 30 April 2020 the premiere was scheduled at the Teatro de la Zarzuela by Luisa Fernanda. But like so many things in those days, Luisa Fernanda was postponed, that not suspended. Now it comes back to a Madrid whipped, but brave, in that "indomitable desire to fight for beauty". Released in Madrid in 1932, It is one of the most popular and widely accepted zarzuelas. One of those works that could be represented in any theater in the world and that is at the level of any work in the Italian repertoire.

This time, the Teatro de la Zarzuela, following his desire to internationalize the genre, wanted to have as musical and stage directors the British Karel Mark Chichon and the Italian Davide Livermore, respectively. It is one more way of approaching the zarzuela without prejudice and showing other visions of seeing and feeling our lyrics.
It is the first complete zarzuela that Chichon faces, a deep connoisseur of our lyrical repertoire who, with his wife, the mezzo-soprano Elina Garança, show their affection for this genre by playing it around the world.

Davide Livermore's knowledge of the zarzuela is more recent, dates back to his time as mayor at the Palau de Les Arts. Approaches the genre with deep respect for its principles, but with little success when choosing the elements that star in the scene. I don't know why many set designers insist on making everything turn, even, too. Apart from almost projecting poor Luisa Fernanda in one of the scenic turns, It is dizzy and distracts from the scene.
A Livermore, who likes good-sized stage elements, he got a bit out of hand with the good reproduction he has made of the façade of the Cine Doré. Luckily the corps de ballet, the choir and the singers, they had a good direction of actors and well learned the staging. It wasn't easy at all, especially in some moments, move around a stage full of traps and in constant movement.
The idea of ​​the cinematograph and the projection was very romantic, like a movie, of different scenes of the protagonists and others of the time. And, Besides, the projections would have been consistent with each other, the result would have been brilliant. More successful was the scene of the vareadores, with a well-drawn meadow of Extremadura.
Definitely, an exaggerated scenography that looked like a collection of elements from different works, all of them from different times. What comes to be a scenography of use.

The Orchestra of the Theater, at the command of Chichon, rang with great dignity, somewhat slow at times, but with chasticism and color. Very meritorious for a pit formed by barely 23 teachers for pandemic issues.
The same occurs with a choir reduced to five male voices and five female voices.. The mask did not prevent a magnificent performance, with some small initial mismatch, and the recognition of the efforts of all these professionals who are part of the Teatro de la Zarzuela.

The work of the musical and stage director was always supported by the theatrical capacity of a good cast of actors / singers on stage..

The character of Vidal was played by Juan Jesús Rodríguez. Before the beginning of the work, it was reported that his vocal loss caused by laryngitis. His performance was very commendable, but their difficulties were noticeable, especially in renouncing the higher registers.

Luisa Fernanda was in charge of Yolanda Auyanet, that a good recitative was marked out, prior to their musical numbers. As Livermore says, "Recitatives are not a break while waiting for the musical number, they have to be well supported by a good actress ". This is the case of Auyanet, that shone in the interpretation supported by a good declamation. His voice has lost some agility, but retains a powerful center and exquisite taste in phrasing.

We are going to end up catching a mania for Jorge de León for the villainy of many of his characters. It must be by nailing them in the interpretation. Start with the romance "From this peaceful corner of Madrid", without having barely entered the matter, may be a hamdicap. De León started something out of temper to get in tune with the progress of the work. Its emission is clean and powerful, but their singing is unnatural and with engolado sounds.

The Countess Carolina was well interpreted by Rocío Ignacio. He knew how to give the point of frivolity and sophistication that this character requires. He has a powerful voice and good highs, but its excessive vibrato prevents good diction.

Maria Jose Suarez, in the role of Marisa, it's always a guarantee on stage. His stage presence and acting capacity always put that necessary histrionic point in each representation.
The rest of comprimarios were at a good level. Highlight especially the revolutionary Luis Nogales, by Antonio Torres and veteran Emilio Sánchez, as Don Florito.

A night of zarzuela that rescues us from reality. Always in fear of a last minute suspension, but always maintaining this exercise of resistance in the face of reality. But beware!, that this theater is as real as everything else.