Magdalena Kožená and an attempt to merge the Real 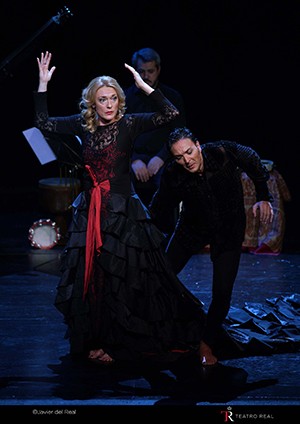 He Teatro Real Friday was another attempt of fusion between Baroque and Flemish. Entitled Love: between heaven and hell, works presented, among others, from José Marín, Juan Serqueira of Lima, Jean Battiste Lully, Juan Hidalgo O Sebastian Duron. I must say that the result of this merger attempt has been nil. Gerard Mortier He said that flamenco should be on stage at the Teatro Real, as it befitted a high art like this. But I think Mortier did not mean exactly that. Endeavor to merge Flemish Baroque and requires, To my humble opinion, further elaboration and fluency so that the result does not seem forced.

The great demand for this recital has been the Czech mezzosoprano Magdalena Kožená, and perhaps this has also been the biggest disappointment. The repertoire was totally oblivious to it. Like the language, a bad phrasing barely understood nothing of what he said, supposedly in Castilian. Static on stage and with a planar edge, as continuo, They marred a Spanish baroque repertoire on paper appealed. All it adorned in an awkward, although commendable, I wanted to attempt apparently flamenco dancing.

The following complaint of the evening was the choreographer and dancer Antonio El Pipa. Accompanied on guitar by Juan José Alva and Daniel Ramírez, and singing Toñi Nogaredo, Sandra and Estefanía Zarzana. Impeccable in the accompaniment of Antonio El Pipa to which cost the public cold heat of the Royal Theater, unaccustomed to these spectacles. Elegant gesture, Pipa also had the mission of clothing in the Kožená dancing when she tried to accompany him.

An interesting at times and dull night in what the main attraction of a show that has visited the main European theaters were supposed. But do not lose hope to see this repertoire of Spanish courtly song performed with greater success.