Maria Moliner and the army of invisible women 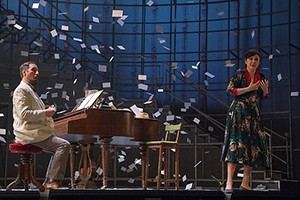 It is unusual brand an opera in Spain. It is even less so in the Teatro de la Zarzuela. And if opera is Spanish, more musical event, We talk almost a miracle.

María Moliner is a character with enough packaging to star a story. Packaging and heroics who made a formidable task from pure ostracism. Write a dictionary of use of Castilian in the solitude of her living room, isolated and surrounded by the censorship of the time, do it in only fifteen years, and discuss even own dictionary of the SAR and the members of his academy, It is not a minor event.

On an idea Paco Azorín It has been built and maintained rigorous work. Divided into two acts and ten scenes, It is the result of complicity between Paco Azorín himself, the composer Antoni Parera Fons y the librettist Lucia Vilanova. It is in music where lies much of the success of this opera. Expert on the dynamics jars and able to write specifically for voice, Parera Fons has composed a score perfectly recognizable and highly consistent from start to finish. He has been able to use different musical techniques in perfect balance and put them at the service of the work.

In this point, the work of musical director Victor Pablo Pérez It is flawless. Sensitive and attentive to everything happening around, he drew from his orchestra every nuance of the score, enriqueciéndola.

The libretto of Lucía Vilanova has been nurtured mainly from two sources, the biography of María Moliner Inmaculada de la Fuente, and own dictionary. The article tries to reflect the daily life of such a complex process as is the development of a dictionary, but mostly it tries to unravel his inner life, their dreams and the evolution of a project of this magnitude. Perhaps the script lacks the lyricism of an operatic work. Too vividly describes some difficult events to fit into a proper line of song. The libretto has added a dream, which imagines the time of writing the application for entry into the Academy. Moliner is then accompanied by other writers who, like her, They should have been part of the RAE. They help draft the letter Emilia Pardo Bazán, Isidra de Guzmán and of the Bristle and Gertrudis Gómez de Avellaneda.

Another pillar of this work is its protagonist. María Moliner's role was written specifically for Maria Jose Montiel. Delivery to the character is absolute. His stage presence is almost constant and both, Moliner and Montiel, They have the same burden of temperament tenderness. His consistent voice, extensive and generous smoothness, sways with its beautiful timbre every note issues.

The rest of the cast is headed by José Julián Frontal, as Fernando, her husband. The character is not extensive vocally but is very well positioned thanks to its great performance.

Emilia Pardo Bazán has been interpreted by the soprano vizcaína Celia Alcedo, voice strong and well armed, He endowed his character in the entity that is supposed.

At a very high level were, despite its brief interventions, María José Suárez Y Lola Casariego, who played Isidra de Guzmán and of the Bristle and Gertrudis Gómez de Avellaneda, respectively. Like an evil Sandra Fernández, CEU exerting inspector and later Carmen Conde.

Goyanes, the typesetter María Moliner, character that existed in reality and joined the libretto. It is played with grace by the Valencian baritone Sebastiá Peris.

Highlight the role of the three almanacs very dynamically introduced various important moments in the life of the protagonist. the tenor Gerardo López and baritones David Oller Y Toni Marsol.

Special mention should be participation, as an armchair B SAR, baritone Joan Pons. It is always a treat to hear his voice strong and mighty.

The work of Coro del Teatro de la Zarzuela He was at a high level in his numerous interventions.

The scenery of Paco Azorín has two main elements moving metal structures and whose protagonists roam the endless staircase creating scenes of great dynamism and visual appeal. Behind them images of different characters and historical moments are transposed. The result can not be more successful. Po stage characters and events unfold under good direction of actors.

María Moliner is never alone on stage. It is accompanied by a small army of women who recite the meaning of his words while they grow in number over representation. This beautiful allegory emerges from one of the leaders who had Paco Azorín to create your scenery, Marguerite Yourdenar, with which our protagonist bears some similarities. Yourdenar became part of the Academy of the French language in 1981. In his inaugural speech he said: "I come here accompanied by an army of invisible women who should have entered this academy before me. I feel tempted to step back to pass them ".

This seemingly invisible army of women end up flooding everything, first stage and then the room. By doing so present to all those women who went before.