Mariella Devia, as a queen goodbye 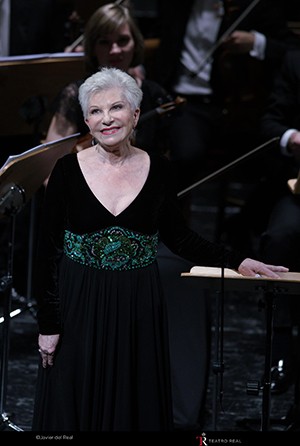 coming Mariella Devia at Teatro Real with the intention of saying goodbye, although hardly appreciate her voice indications minor decline. We will not see it in operatic productions, those that require you to spend long periods away from home in Rome, but if we can hear it until late 2019 in some recitals. And he says goodbye to the closing scenes of bel canto operas two were rescued in recent decades to the repertoire, in what is known as a trilogy Tudor. In the case of Anna Bolena, Maria Callas was one who raised. Maria Stuarda A was given Monserrat Caballe brightness or Joan Sutherland. Both works and queens ended up forming part of the repertoire of Mariella Devia also has reigned and as such bids farewell.

He says he does not like talking about herself, who prefers to express singing and, despite its interpretative sobriety, always wonderfully it reflects the intensity of the character represented by a flawless technique. He carefully his voice and his career wisely, no hurry, without forcing the instrument, always playing those roles that fit in your vocal range like a glove. She herself told us: "The choice of repertoire is essential. I have had an evolution in my career, but always keeping me in the field of repertoire I was driving. I have evolved, but always in the same field ".

always contained, no exhibits or extravagances, not need. His refined technique and ease of coloratura and legato have been trademark throughout his career. We could see a couple of seasons ago Norma. A role that most sopranos at his age have stopped playing long, but she has addressed until the end of his career masterfully.

this soprano, light in its infancy, it was expanding the repertoire while his voice, up to give the body today has, He has left us an extraordinary display of bel canto roles, "I would have liked to sing Verdi whole, Don Carlo, which it is a great opera, Otello, I was offered once, but after having considered, heard and read, I know what my means and if it would not be true to what was written or be able to satisfy the public ".

Good company on stage at the Teatro Real by low Javier Franco as Lord Rochefort in Anna Bolena and Giorgio Talbot, Maria Stuarda in. The tenor Alejandro del Cerro as Lord Riccardo Percy and Earl of Leicester. Enmanuel tenor Faraldo, como Sir Hervey. Gerardo baritone Bullón, as Lord Guglielmo Cecil and mezzo-soprano Sandra Fernández, as Smeton and Anna Kennedy. The address was given by José Miguel Pérez-Sierra, I was able to bring to the Orchestra and Chorus of the Teatro Headlines, despite the few tests performed for these recitals.

He leaves one of the last divas, although it is the clearest example of anti-diva, between long ovations from an audience aware and appreciative. We can only feel fortunate to have been able to enjoy his art.