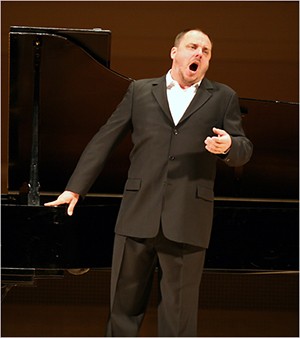 With swansong (Swansong) It ends the cycle this season has offered Matthias Goerne on Franz Schubert. The whole universe of Schubert Lieder with The beautiful Miller (The beautiful molinera) Y Winterreise (Winter trip).

He 30 April Goerne and Hinterhäuser addressed Winterreise. A cycle of songs compounds initially tenor, but leaving open the possibility of being interpreted by most serious voices that can provide greater intensity and darkness each song. Sometimes also it is interpreted by female voices. And is that Winterreise, unlike other works, through its dynamic, times the phrasing, It provides an almost endless variety of interpretive possibilities.

And Matthias Goerne is of those interpreters who gives Winterreise of life. Goerne delves into the intimacy of this winter trip like no other. The flexibility of his baritone voice, always discover new nuances in this set of songs so you never get tired of listening. This dramatic journey to the solitude of verses Wilhelm Müller, describe the emotional moment of a Schubert abandoned by a woman. The songs are shelling, by hopelessness, Roving for that trip to melancholy.

Just one week later, he 8 of May, Goerne, this time accompanied on the piano by veteran Alexander Schmalcz, which he replaced a sick Hinterhäuser, he offered swansong. Poems that make up this cycle of songs, unlike the other two cycles, not belong only to one author. In this case there are three poets chosen, Ludwig Rellstab, Heinrich Heine and last Seidl which it has been omitted in this recital. It seems that was not part of the initial body and was only added by the superstition that they were not 13, if not 14, the songs that make up this cycle.

This latest collection of songs was made by the editor Hanslinger and Schubert's brother, after the composer's death, to the enormous production of songs he had composed, almost compulsively, before his death. Less well known than the two previous cycles, swansong not only is a matter. These contain themes dedicated to love, lost love, mythology and, one of the favorite themes of Schubert, trip, of dealing stay (Resting place).

Goerne has used almost all of the resources you have, which they are few, Shelling each parts forming this cycle. From vocal exaltation, perhaps somewhat exaggerated The Atlas (The atlas), the disturbing drama of The lookalike (The double), with which Goerne is capable of transmitting the most profound and wrenching psychological tensions. The execution of Alexander Schmalcz the piano, It was the setting and the perfect way for the interpretation of Goerne. Subtle, energetic and delicate. All at the moment and just measure.