Death in Venice. The beauty … 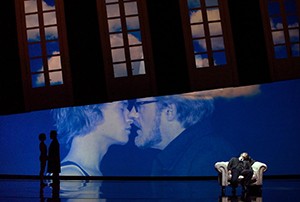 When Benjamin Britten I was contacted by letter Golo, the third son of Thomas Mann, to request your permission to write an opera based on his work Death in Venice, He did not suspect it would be his last work. Or maybe if. Upon hearing this disturbing work it is not known to what extent Britten was aware of the little time he had left.
Death in Venice is a compendium of all his artistic work starring his alter ego, Gustav von Aschenbach. A victim writer and creative staff and full decline of emotional contradictions.

The main feature of this work is the use of a single main character. With this stagecraft, Britten pursues more eloquently about thinking and sensitivity of Aschenbach. The result is an absolutely introspective work that the stage manager Willy Decker captures extraordinarily, transforming inside Aschenbach monologue in a bright theatrical performance with all symbolic elements described by Mann.
This is an important stage challenge. Their 2 acts and 17 scenes require a fast-paced change, film, Decker performed masterfully. With the conceptual elegance and panache that provides film and that is achieved in this production. The beauty of the scenic pictures, nuanced and surround lighting, the extraordinary direction of actors and attention to detail make Death in Venice a work full of attractive and aesthetic reflections.

The other main character, the score, sound is full of peculiarities. What is striking first it is the role of percussion, that far from being a mere accompaniment, becomes the skeleton and protagonist of the play. The symbolic importance containing the text is also displayed. For example, the young man Tadzio, by which Aschenbach is attracted, and who does not speak throughout the representation manifesting the communication problems the protagonist, It is represented by the vibraphone at the beginning and then the lira. Emotions and moods also have their orchestral representatives within a complex score, disturbing, almost dark, intimate and full of strength.

Another important element in the work of Britten are the many recitatives. It may be more an element of expression of that ongoing analysis and inner reflection, or it may be the composer, and conscious of the deteriorating health, he feared not being able to finish on time opera.

British tenor John Daszak plays a harried Gustav von Aschenbah introspective. And it does so brilliantly. It is not easy role, a character so dark and full of contradictions, which it requires more effort than vocal interpretation. The end result is a well-armed Aschenbach and equipped with the most contradictory aspects of the character.
The voice of Apollo, interpreted by the American countertenor Anthony Roth Costanzo from paradise, It is a little tight but looks good on the character who represents.
Leigh Melrose he played various characters chameleonic way. It shone in all, mainly in the most histrionic, showing great acting talent.

Worth waiting so long to see this production at the Royal Theater. Once again, much of the audience of this theater lets out another opportunity to appreciate an extraordinary work.