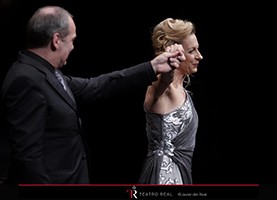 He began the cycle Great Voices of the Royal Theater with a recital of Natalie Dessay. He not returned to the theater from a previous recital 2007 and he was almost forced upon cancellation of “The Daughter of the Regiment”, last season. It's a shame you have decided to dedicate his vocal and artistic energies only concerts, abandoning the operatic performances. You can spare energy and vocal qualities. So let it revealed last 29 of September.

Remains almost intact the freshness of her voice, the volume and perfect pitch. Although his usual repertoire consists of arias by composers and French operas, dominates other territories. The first part, somewhat cold until he entered on, It was composed songs Schubert Y Mendelssohn.
The second part played Duparc five songs on texts Victor Hugo. A part of an extraordinary piano performance of Sonnet 104 de Petrarca, from Liszt, in charge of Philippe Cassard. Dessay he accompanied masterfully. Two encores closed at night, the second of them a Spanish song.

Especially in the second part of the recital, Natalie Dessay was some trouble with his throat. Dry environment, maybe. At the end I'll have to agree to stretching Roberto Alagna.