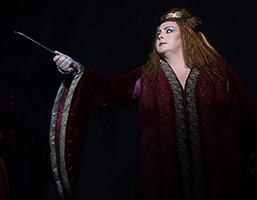 Not surprising that Rule, which they say is the masterpiece of bellcantismo, and one of the repertory operas, it has taken 102 years to be represented at the Teatro Real in Madrid.

Bellini, bridge between classicism and romanticism, It took the curiosity of everyday emotions to a timid society by Catholicism. A true revolutionary of the romantic feelings he knew influence other composers. Chopin Bellini inherited the flexibility to address the tempo and harmony. Verdi Bellini moved the revolution from the private to the public, using the political connotations to create collective emotions. Wagner, one of the composers influenced by Bellini, he even compose a new version of the aria of the second scene Oroveso.

Why then it is not Bellini one of my favorite composers? Because of tastes ...

Norma is certainly a great work. It is full of small details, those who usually lives in the devil, but here they hide the delicacy of some extremely slow tempos that trace the romantic philosophy of work and full of complexity the work of singer, forced a slow release. Dilated melodies that require a well worked fiato, as it evidenced in one of the arias which is a "hit" from the opera, the long-awaited by the public "Casta Diva”, and summarizes the value of romantic time.

A time that Wagner had in mind to create Tristan und Isolde. A Isolde that, as Standard, It detonated himself on a wide and increasing melody.

But get down to earth. More specifically representation 21 October. This is a co-production with Teatro Real Palua Les Arts in Valencia, which already it premiered last season, y ABAO.

The scenery Davide Livermore It has clear cinematic influences. Through Game of Thrones or King Arthur, produces a dreamlike and fantastical atmosphere that features an overwhelming tree. It occupies much of the stage, rotates and moves as totemic element and oracle, where everything happens and everything is fulfilled. The intention is to create a claustrophobic atmosphere, as is the story itself. And it does.

The scenes are completed with projections D-Wok. that advance, as an oracle, the future that awaits the protagonists.

The energetic baton of maestro Roberto Abbado the overture began with excess volume. Onstage the dancers came and went, choir, scenic elements and projections amid an apparent bafflement. When it seemed that chaos had taken over the representation, He appeared on the scene, at the top of the tree, Angela Meade singing "Casta diva " Y, suddenly, reigned peace and harmony, everything is put in place and only then began Norma.

Before he made his appearance Meade, and part of the initial confusion, Roberto Arónica had begun its representation Oroveso. In woody and strident voice lacks depth and serious character. He improved in the second act and put more intention and nuance to their arias. His interpretation was cold and dispassion.

Simon Orfila He composed a Oroveso with good stage presence, but his voice, although well-pitched, not dark tones that have endowed his character that requires packing.

Angela Meade not only it came to bring order, It was the key to the appearance of the bel canto. powerful voice and clean emission, although with notable shortcomings interpretative, not stopped going up and down the many steps of the protagonist tree while singing. something worthwhile.

The Roman Veronica Simeoni, as Adalgisa, He was correct. Best in the duet with Norma second act, for which it seemed had been saving.
While Barcelona María Miró as Clotilde. It did not go unnoticed.

Norma waiting so long and has come up with a fundamental lack, the passion. It will have to wait. But other than another hundred years.