Only the sound remains, the sound of emotions - Brío Clásica
↓ Skip to Main Content 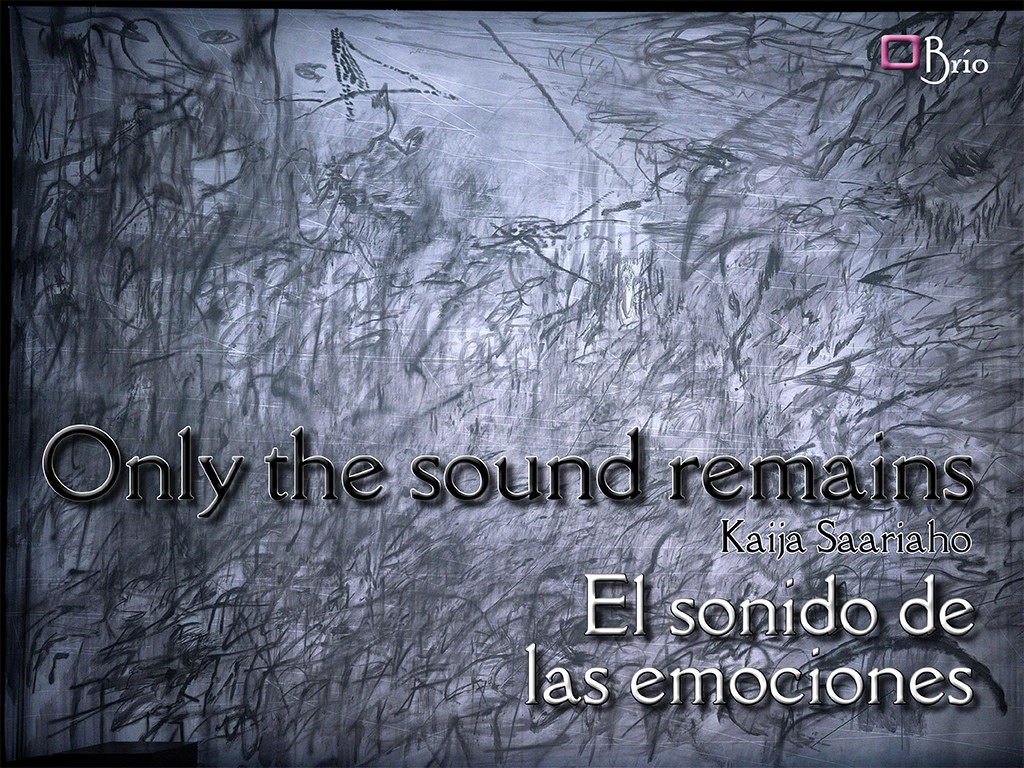 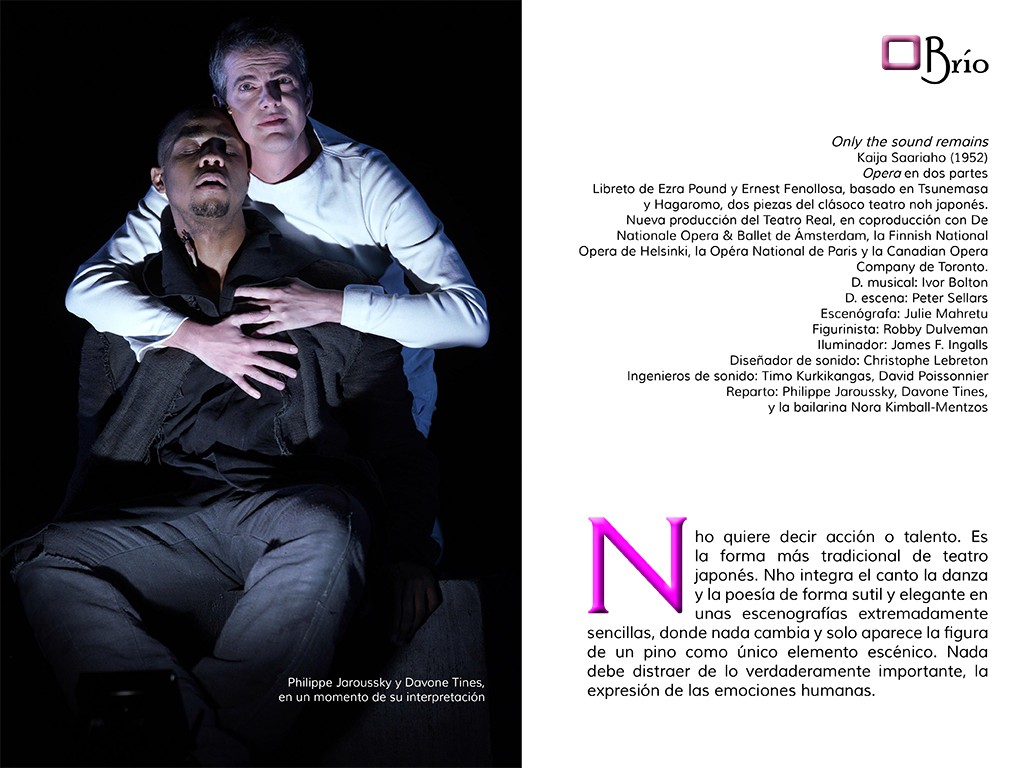 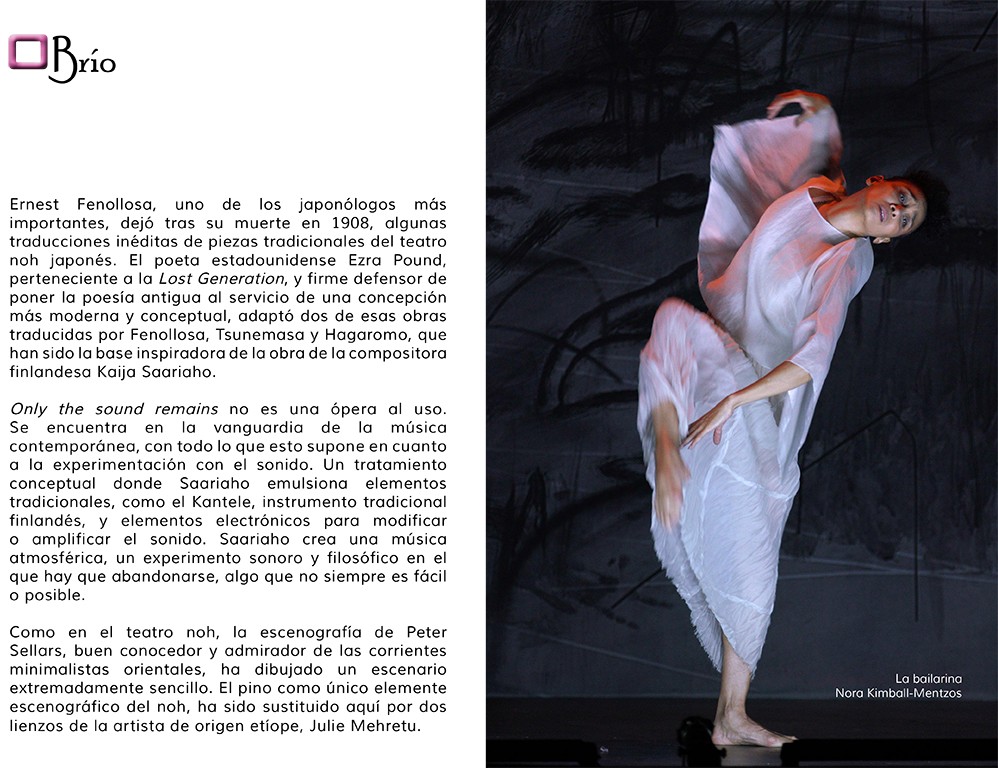 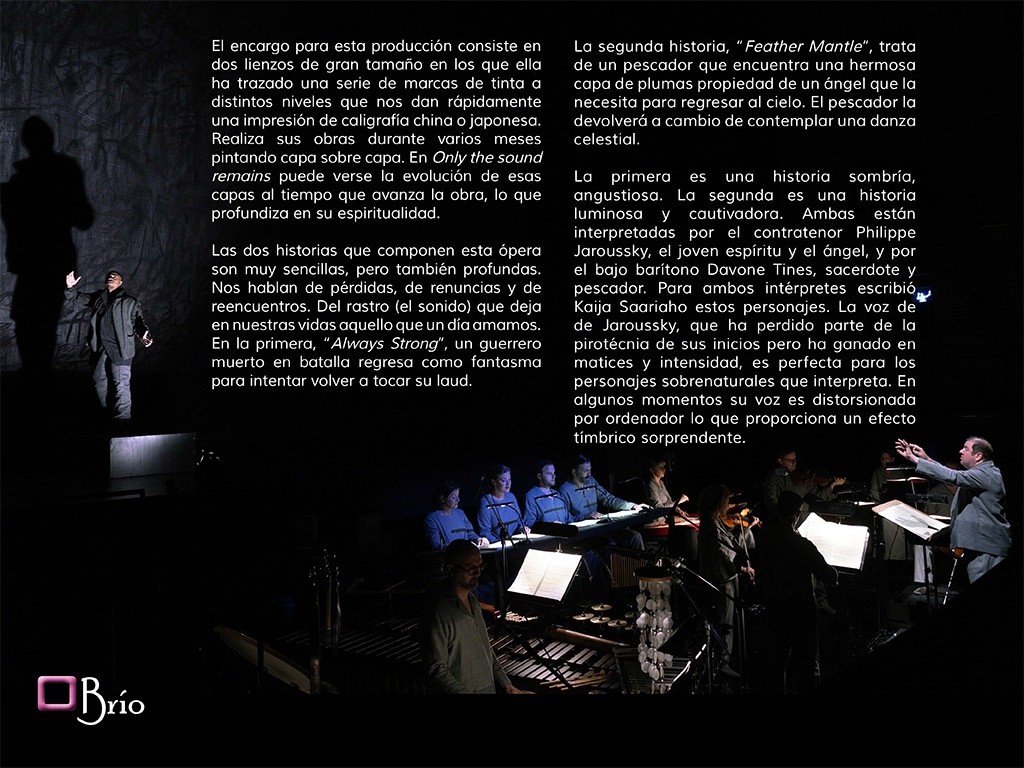 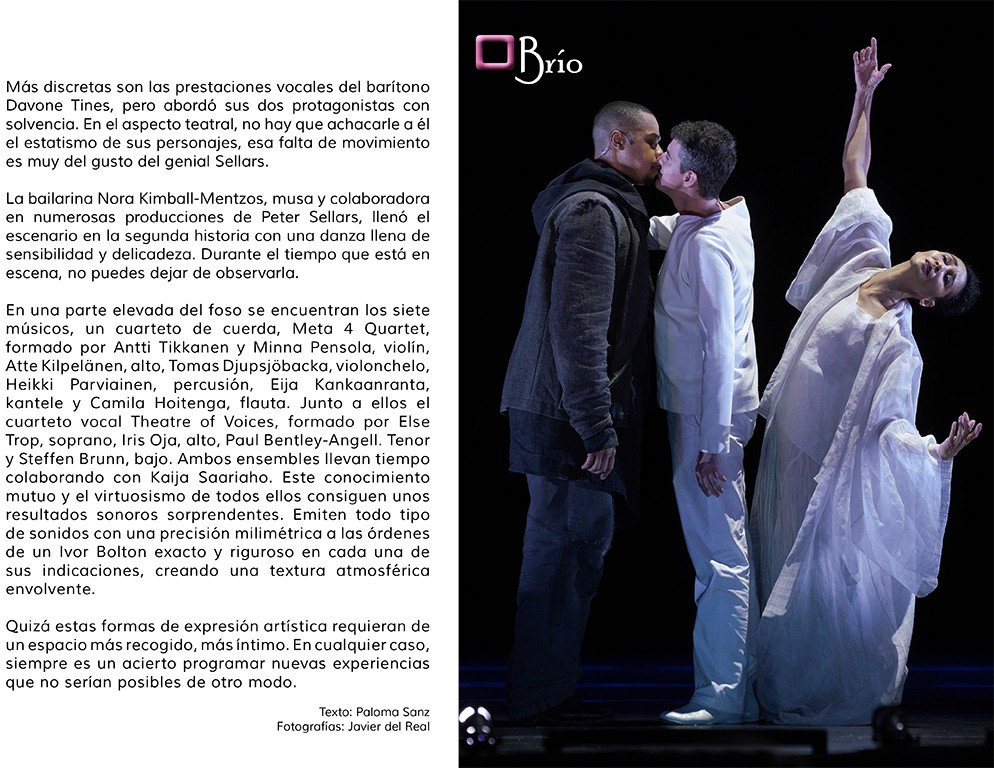 Ernest Fenollosa, one of the most important japonólogos, He left after his death in 1908, some unpublished translations of Japanese traditional pieces Noh. American poet Ezra Pound, belonging to the Lost Generation, and staunch defender of ancient poetry put to the service of a more modern and conceptual design, He adapted two of these works translated by Fenollosa, Tsunemasa y Hagaromo, which they have been the inspirational basis of the work of the Finnish composer Kaija Saariaho.

Only the sound remains no es una ópera al uso. It is at the forefront of contemporary music, with all that this implies in terms of experimentation with sound. A conceptual treatment which emulsifies traditional elements Saariaho, as the Kantele, Finnish traditional instrument, and electronic elements to modify or amplify the sound. Saariaho creates an atmospheric music, a sound and philosophical experiment to be abandoned, something that is not always easy or possible.

As in the noh theater, the scenery of Peter Sellars, a connoisseur and admirer of Eastern minimalist currents, He has drawn an extremely simple scenario. Pine sole escenográfico elemente noh, It has been replaced here by two paintings by the artist of Ethiopian origin, Julie Mehretu.

Commissioned for this production consists of two large canvases in which she has drawn a number of brands of ink on different levels quickly give us an impression of Chinese calligraphy or Japanese. He performs his works for several months painting layer upon layer. Only the sound on remains can be seen the evolution of these layers while the work progresses, which deepens their spirituality.

The two stories that make this opera are very simple, but also deep. We speak of loss, Withdrawals and reunions. trail (Sound) it leaves in our lives that we love one day. In the first, “Always Strong”, dead in battle warrior returns as a ghost to try to touch his laud.

The second story, “Feather Mantle”, is a fisherman who finds a beautiful feather cloak owned by an angel who needs to return to heaven. The fisherman returned in exchange for contemplate a celestial dance.

The first is a dark story, anguishing. The second is a bright and captivating story. Both are performed by countertenor Philippe Jaroussky, the young spirit and angel, and bass baritone Davone Tines, priest and fisherman. For both performers Kaija Saariaho wrote these characters. The voice of Jaroussky, which he has lost some of its early Pyrotechnics but has gained in nuance and intensity, It is perfect for the supernatural characters he plays. At times his voice is distorted by computer which provides a surprising effect tímbrico.

More discreet are the vocal performance of baritone Davone Tines, but he addressed his two protagonists with solvency. In the theatrical aspect, not to impute to him statism of his characters, this lack of movement is very great taste of Sellars.

The dancer Nora Kimball-Mentzos, muse and collaborator in numerous productions of Peter Sellars, He filled the stage in the second story with a dance full of sensitivity and delicacy. During the time he is on stage, You can not help but observe.

In an elevated part of the pit are the seven musicians, a string quartet, Meta 4 Quartet, formation for Antti Tikkanen y Minna Pensola, fiddle, Atte Kilpelänen, alto, Tomas Djupsjöbacka, cello, Heikki Parviainen, percussion, Eija Kangas Beach, kantele and Camila Hoitenga, flute. Beside them the vocal quartet Theater of Voices, Trop formed by Else, soprano, iris Oja, alto, Paul Bentley-Angell. Tenor y Steffen Brunn, low. Both ensembles have long been collaborating with Kaija Saariaho. This mutual understanding and virtuosity of all get some surprising sonic results. Emit all kinds of sounds with pinpoint accuracy to the orders of an Ivor Bolton accurate and rigorous in each of its indications, creating an immersive atmospheric texture.

Perhaps these art forms require a more welcoming place, innermost. In any case, It is always a wise program new experiences that would not be possible otherwise.