Decaffeinated Otello at the Royal Theatre 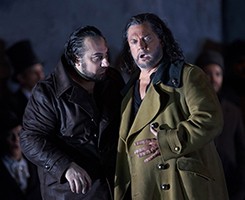 A cozy and renovated Teatro Real receiving the 15 September the start of the season. New colors and signs that bring you, in appearance at least, other prestigious theaters. Y, as if the Scala or the MET it were, the most famous perched on the forocool located at the entrance holl evening dress. Surely this is a way to advertise the theater and the season begins, even if there is some unease increasingly turn to television to get retail.

And the season began with Otello, the work that shows the most advanced musical language of the composer, the rest of his work.

Verdi y su librettist, Arrigo Boito, they created a story full of intensity and drama based on the text of Shakespeare Othello or The Moor of Venice (1603). Leaving aside the libretto of the Venetian part, Verdi and Boito masterfully adapted the original text. They use the issue of racism, not to describe the character, but to reveal their insecurities. The standardization Boito made Otello, lightening the racist aspect, He made extensible to any possibility of committing the worst atrocities as a result of insecurity and jealousy. This effect makes the Verdi opera is even more disturbing that the work on which it is based.

The scenery is the director David Alden. The same who took care of last season Alcina. scenography, the Alcina, hard to forget. Nightmares do not refer. And now comes this Otello that, perhaps be respectful imagined the scenery which its composer, but the result is an improper modesty of a Royal Theatre. Too dark and lacking a place for those moments of recollection that dot the work. Everything takes place in the same place, at the gates of a building almost in ruins. Desdemona and Otello there seal their love. There you discuss and doubt. There Iago conspires. there dies, urgently and coldness, Desdemona.

A unique and decorated desangelado that is overwhelming in the first scene, where it seems that any time a member of the choir will rush into the pit.

The sharing production with much lower dimensions theaters to Real, as the Stockholm Opera, may explain to a stage in which at least two-thirds of stage background despise.

The only thing that improves the scenery is Adam Silverman lighting that achieves moments of intensity and suspense, which they raised the tone of some scenes interpretative. The moment an Otello appears on the scene threatening to kill Desdemona, it becomes disturbing thanks to the play of light and shadow.

Desdemona is the character of this work that has a lower psychological development. It is the representation of femininity without further elaborations. The Eternal Feminine. And if anyone is able to demonstrate on stage these roles so characteristic of the time is, definitely, Jaho Ermonela. We still remember his traviata, especially the third act. This time, Alden has not given the chance to die on stage with the drama and dignity that proved to be Violetta. Here recreates a delicate and sensitive Desdemona. It does not have a high volume of voice, but neither need.

He shone especially in the fourth act, with a pianissimo of great beauty. So that here the orchestra also apiana. It would have been impossible to listen to the sound of the first and second act. He was particularly delicate given the song Salce and the love duet with Otello.

Gregory customer, He is returning to the Royal Theatre after extraordinary Roberto Devereux last season and with the sign of being one of the best Otellos the moment. I confess that I liked the Otello Palau de Les Arts two seasons ago. His resounding voice and presence, no less emphatic, They make him perfect for this role. On this occasion seemed blurred. Caught the diminishment of the scenery. His sharp sounded full and bright but the bass seemed to cast a low voice, ingloriously. Only in the last act she showed their power. The acting ability has improved, but it's still yours a dramatic impact Otello low.
Nor intensity walked left over the Iago of George Petean. You can not say that its interpretation has been touchingly, but the character is far from the vileness was raised. It was less to more, like all, and he was showcased in "Credo in Dio Crudel".

Alexey Dolgov turned out to be an excellent Cassio. He showed character and a good performance.

The direction of Renato Palumbo was not exactly delicate. During the first and second act, music coming from the pit with excess volume and agitation and conveyed a certain uneasiness. It was nice to see the frenetic activity of many people on a small decorated, with a disturbing musical background during the storm scene. If the purpose of this little Palumbo was to generate hysteria, ¡bravo!.

But his address did not change with the intervention of the singers. It did not take care of them when their arias required neatness. The lack of restraint in the voice forte swallowed interpreters in more than one occasion. Fortunately the third and fourth act does not allow the noise, and where this production was looked fuller.

The season started with a bit disappointing Otello. This is what usually happens when expectations are exaggerated. But neither should panic. This has only started.