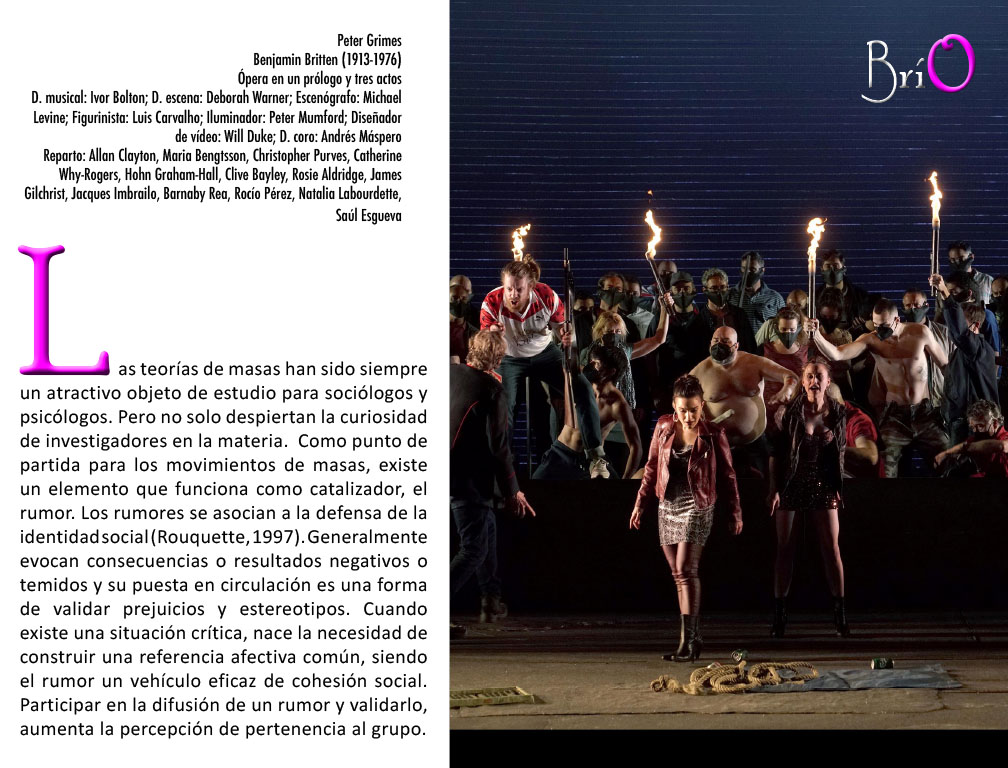 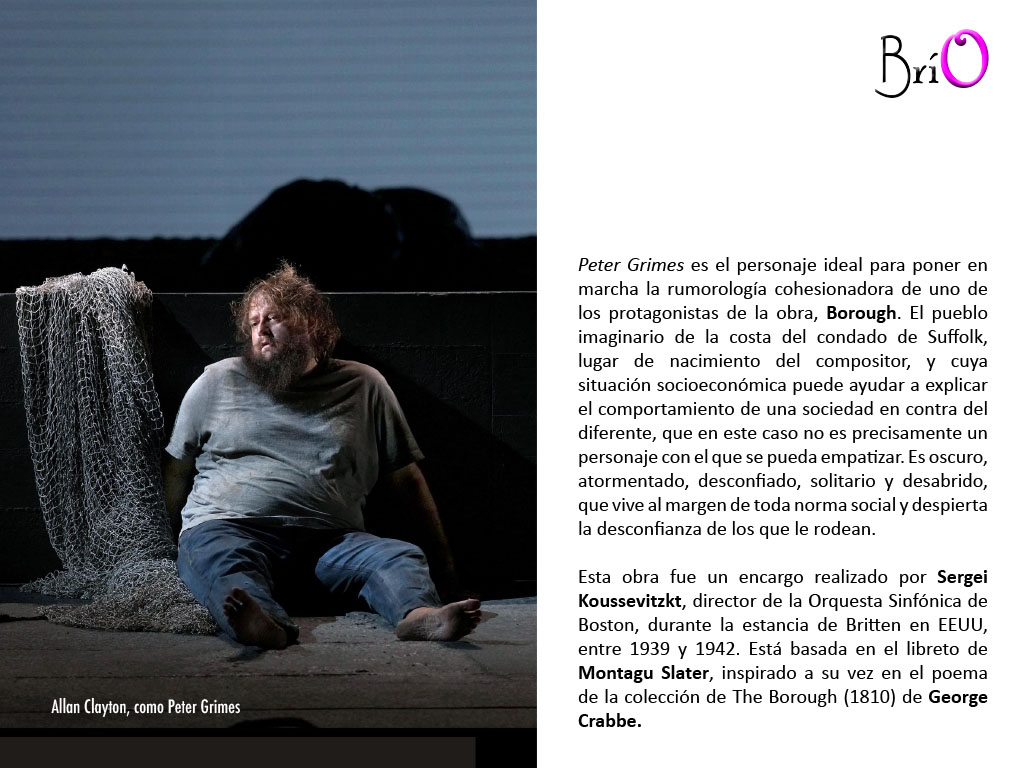 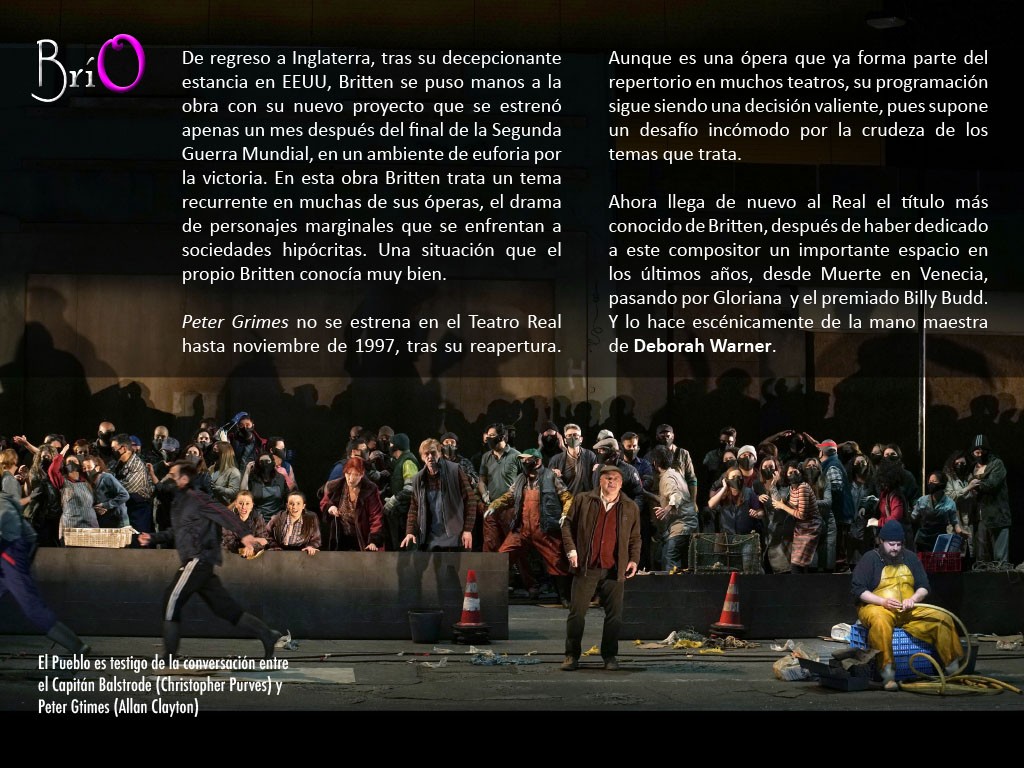 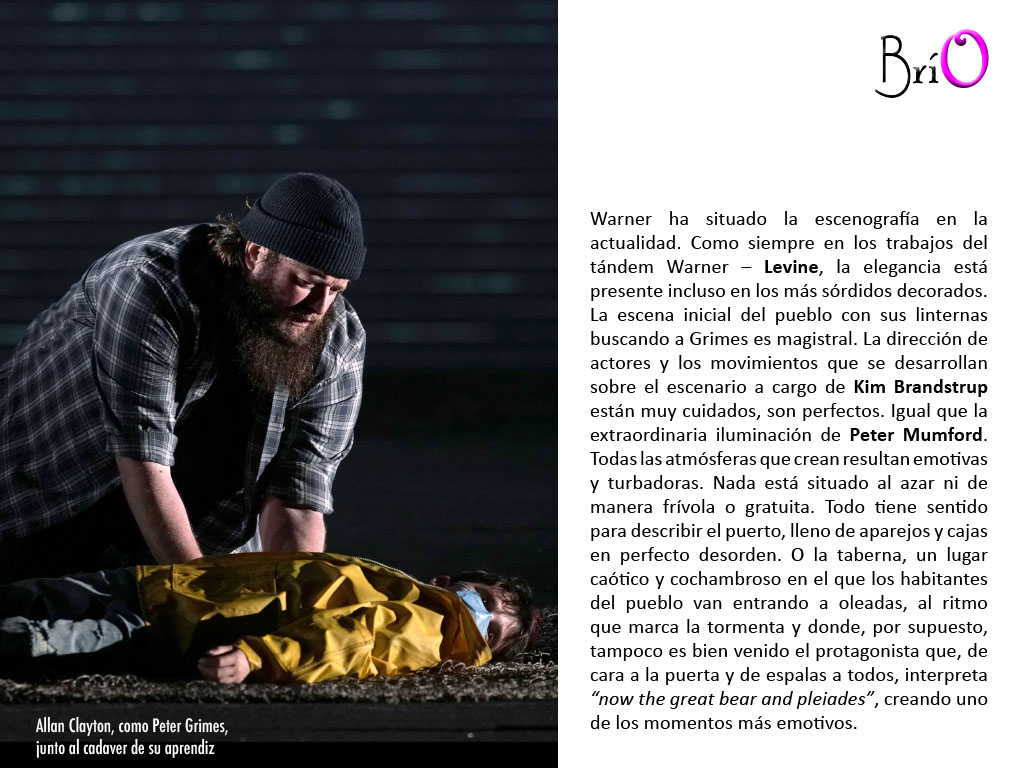 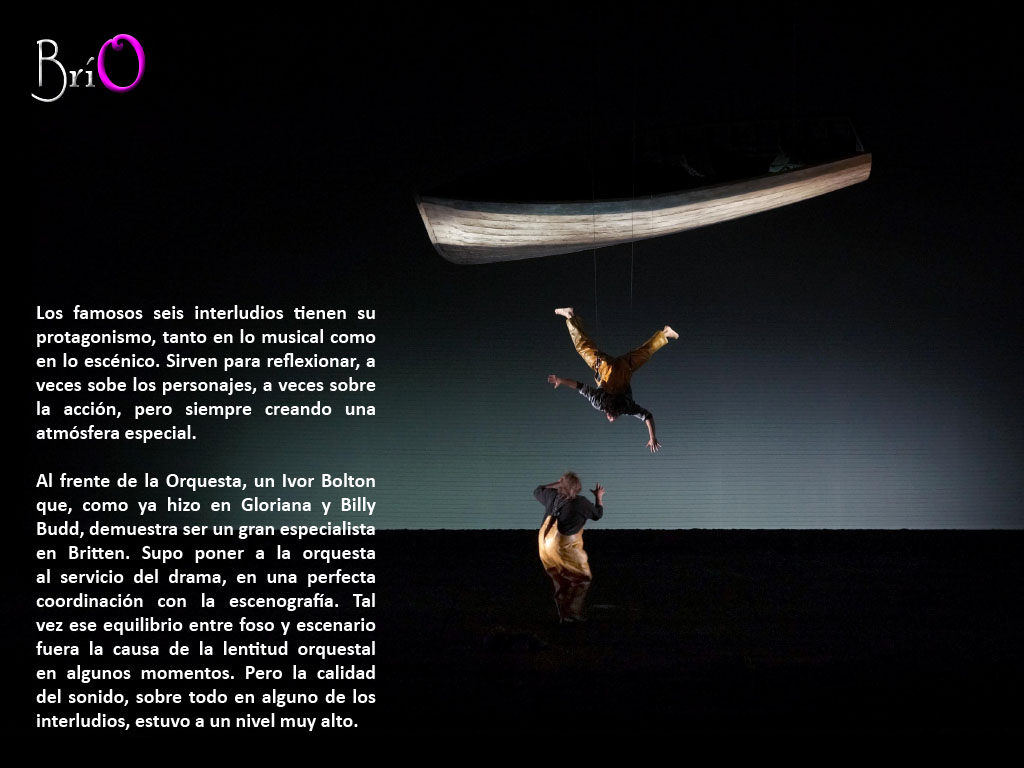 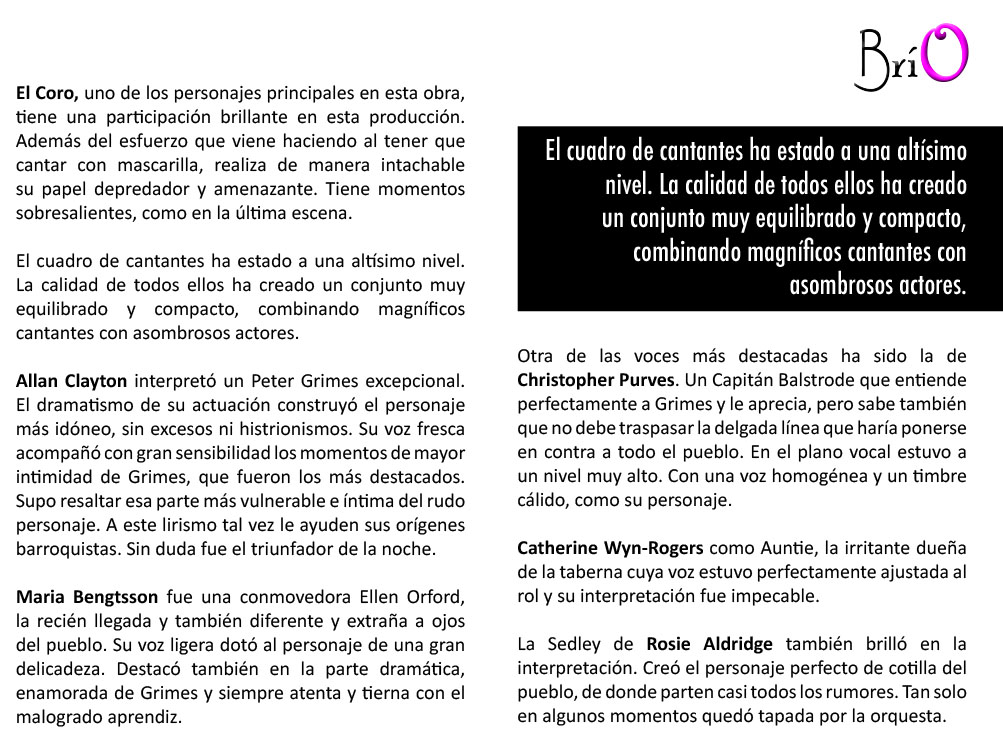 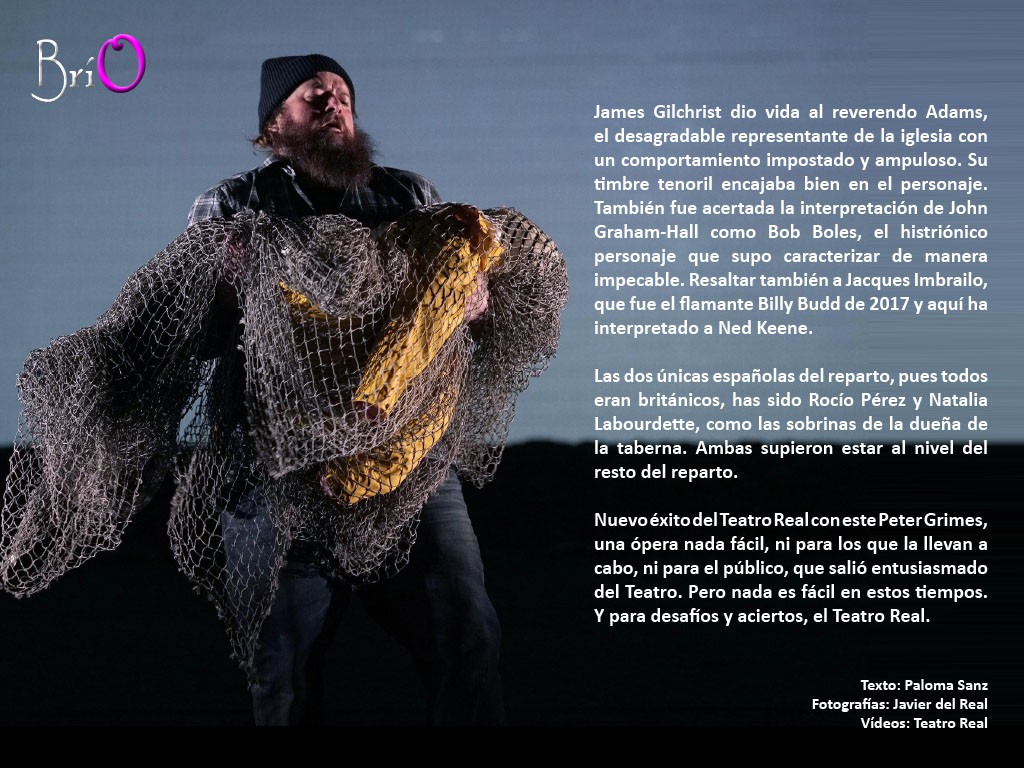 Peter Grimes, from rumor to destruction
Peter Grimes
Benjamin Britten (1913-1976)
Opera in a prologue and three acts
D. musical: Ivor Bolton; D. scene: Deborah Warner; Scenographer: Michael Levine; Costume designer: Luis Carvalho; illuminator: Peter Mumford; Video Designer: Will Duke; D. choir: Andrés Máspero
Distribution: Allan Clayton, Maria Bengtsson, Christopher Purves, Catherine Why-Rogers, Hohn Graham-Hall, Clive Bayley, Rosie Aldridge, James Gilchrist, Jacques Imbrailo, Barnaby Rea, Rocío Pérez, Natalia Labourdette, Saúl Esgueva Mass theories have always been an attractive object of study for sociologists and psychologists. But they not only arouse the curiosity of researchers in the field. As a starting point for mass movements, there is an element that works as a catalyst, the rumor. Rumors are associated with the defense of social identity (Rouquette, 1997). They generally evoke negative or feared consequences or results and their circulation is a way of validating prejudices and stereotypes. When there is a critical situation, the need to build a common affective reference is born, being the rumor an effective vehicle of social cohesion. Participate in the dissemination of a rumor and validate it, increases the perception of belonging to the group.
Peter Grimes is the ideal character to launch the cohesive rumor mill of one of the protagonists of the play, Borough. The Imaginary Town of Suffolk County Coast, composer's birthplace, and whose socioeconomic situation can help explain the behavior of a society against the different, which in this case is not exactly a character with whom you can empathize. it is dark, Tormented, suspicious, lonely and bland, who lives outside all social norms and arouses the distrust of those around him.This work was commissioned by Sergei Koussevitzkt, director of the Boston Symphony Orchestra, Britten during the stay in the US, between 1939 Y 1942. It is based on the libretto by Montagu Slater, inspired in turn by the poem in the collection of The Borough (1810) George Crabbe Back to England, after his disappointing stay in the US, Britten got down to business with her new project that debuted just a month after the end of World War II., in an atmosphere of euphoria for victory. In this work Britten deals with a recurring theme in many of her operas, the drama of marginal characters who face hypocritical societies. A situation that Britten himself knew very well.

Peter Grimes does not premiere at the Royal Theater until November 1997, after its reopening. Although it is an opera that is already part of the repertoire in many theaters, your scheduling is still a brave decision, because it is an uncomfortable challenge due to the harshness of the topics it deals with.

Now Britten's best-known title comes back to Real, after having dedicated an important space to this composer in recent years, since Death in Venice, passing Gloriana and award-winning Billy Budd. And he does it scenic by the master hand of Deborah Warner.

Warner has set the scenery today. As always in the works of the Warner - Levine tandem, elegance is present even in the most seedy decorations. The opening scene of the town with its flashlights looking for Grimes is masterful. The direction of actors and the movements that take place on stage by Kim Brandstrup are very careful, they are perfect. Just like Peter Mumford's extraordinary lighting. All the atmospheres they create are emotional and disturbing. Nothing is random or frivolous or gratuitous. It all makes sense to describe the port, full of tackle and boxes in perfect disarray. Or the tavern, a messy, chaotic place where the townspeople are pouring in, to the rhythm that marks the storm and where, Of course, the protagonist who, facing the door and back to everyone, interpreta “now the great bear and pleiades”, creating one of the most emotional moments.

The famous six interludes have their leading role, both in the musical and the scenic. They serve to reflect, sometimes about the characters, sometimes about action, but always creating a special atmosphere.

Leading the Orchestra, an Ivor Bolton who, like he already did in Gloriana and Billy Budd, proves to be a great Britten specialist. He knew how to put the orchestra at the service of drama, in perfect coordination with the scenery. Perhaps that balance between pit and stage was the cause of the orchestral slowness in some moments. But the sound quality, especially in some of the interludes, it was at a very high level.

The chorus, one of the main characters in this play, has a brilliant participation in this production. In addition to the effort that he has been making when having to sing with a mask, flawlessly performs its predatory and threatening role. Has outstanding moments, as in the last scene.

The list of singers has been at a very high level. The quality of all of them has created a very balanced and compact set, combining magnificent singers with amazing actors.

Allan Clayton played an exceptional Peter Grimes. The drama of his performance built the most suitable character, without excesses or histrionics. His fresh voice accompanied with great sensitivity the moments of greatest intimacy of Grimes, which were the most outstanding. He knew how to highlight that most vulnerable and intimate part of the rude character. This lyricism may be helped by its baroque origins. He was certainly the winner of the night.

Maria Bengtsson was a moving Ellen Orford, the newcomer and also different and strange in the eyes of the people. His light voice endowed the character with great delicacy. He also stood out in the dramatic part, in love with Grimes and always attentive and tender with the ill-fated apprentice.
Another of the most prominent voices has been that of Christopher Purves. A Captain Balstrode who perfectly understands and appreciates Grimes, but he also knows that he must not cross the fine line that would make all the people go against. On the vocal plane it was at a very high level. With a homogeneous voice and a warm timbre, as your character.

Catherine Wyn-Rogers como Auntie, the irritating tavern owner whose voice was perfectly suited to the role and her performance was flawless.

Rosie Aldridge's Sedley also shone in the performance. Created the perfect town gossip character, where almost all the rumors come from. Only in some moments was it covered by the orchestra.

James Gilchrist of Life to Reverend Adams, the unpleasant representative of the church with a posed and bombastic demeanor. His tenorile timbre fit the character well.. The interpretation of John Graham-Hall as Bob Boles was also successful, the histrionic character that he knew how to impeccably characterize. Also highlight Jacques Imbrailo, which was the brand new Billy Budd from 2017 and here he played Ned Keene.

The only two Spanish women in the cast, well they were all british, you have been Rocío Pérez and Natalia Labourdette, like the nieces of the tavern owner. They both knew how to be at the level of the rest of the cast.

New success of the Teatro Real with this Peter Grimes, not an easy opera, nor for those who carry it out, nor for the public, who left the theater enthusiastic. But nothing is easy these days. And for challenges and successes, Royal Theatre.