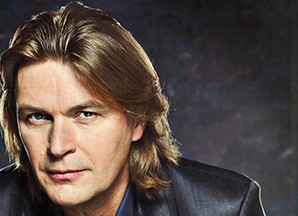 Before this magnificent representation of Otello, The German tenor's recital pales quite a bit Klaus Florian Vogt, accompanied by pianist Jobst Scheneiderat, that took place yesterday in the Church of Carmen, from Peralada. With a program that included four Lied: "The walk", “Halt!”, "On Feirerabend" y "The Miller Flowers" del Ciclo The Beautiful Miller (The beautiful molinera) from Franz Schubert, correction sung by German tenor, far from the interpretations made by baritones Dietrich Fischer-Dieskau Y Hermann Prey; Y, Of course, of the anthological creation of the tenor Frich Wunderlich with pianist Hubert Giesen. His performance was noticeably improved with his magnificent performance of “Dies Bidnis ist bezaubernd schön” from The Magic Flute of Mozart, followed by “Winterstüme” by Wagnerian La Walkiria, where he widened his voice considerably, offering strong sounds, that contrast with those moments when the tenor's voice sounds excessively sweet, amielada, and with a whitish color. The first part of the concert concluded with his remarkable performance of “In fernem Land” by the also Wagnerian Lohengrin, his most famous title in this repertoire. On both pages, his interpretations are far from those currently offered by his colleague Jonas Kaufmann.

In the second part he remarkably interpreted two lies of Johannes Brahms “Sunday” y “Down there in the valley”. Continuing with his excellent interpretation of "Ein Lied geht um die Welt" central theme of the musical film of the same title 1933, directed by Richard Oswald with music Hans May. The entire last section of the concert was dedicated to operetta pages, where the tenor offered his best performances showing his affinity with this genre: "My Wine" de la opereta Countess Mariza de Emmerich Kalman; Y, especially, the operettas songs of Franz Lehár: “Oh girl, my girl ”de Friederike, junto a “Always smile” en The land of smiles, and from this same operetta the famous “Dein ist mein gances Herz”, where the tenor showed an exquisite singing line.
To the applause of the public he sang two tips: a discreet version of West Side Story's “Maria” from Leonard Bernstein Y, Finally, a brilliant interpretation of another page by Franz Lehár “Freunde, life is lifelong! de la opereta Giuditta. The pianist Jobst Schneiderat I do a good job of accompaniment. At the exit of the concert, lightning and thunder, as a preamble to an intense and prolonged storm, which made the festival organizers fear for the representation of Otello the next day, what, fortunately, could be done.