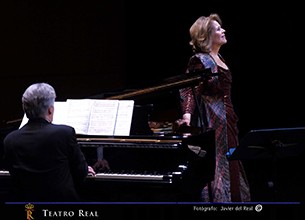 Many are the admirers that the American soprano Renée Fleming has in Spain. So at least it was demonstrated in his recital last night at the Teatro Real.

With works ranging from the Baroque to the nineteenth century, He toured the wide repertoire that has given him international fame.

In the first part, dedicated to baroque, performed works of Mozart, Händel Y Schumann. A first part of the recital not very well chosen in view of the results. His voice is still splendid, especially those dark tones that adorn treble that continue to be full of brightness. But the midtones and what has always been their weak point, the bass, They have lost texture and it seems that they emitted with a mute.

This first part improved with Woman's love and love from Schumann. The more intimate character of these works and their great expressiveness gave him the security that he did not find in the first arias..

The second part was much more interesting than the first. The works of Donaudy, Paolo Tosti, Arrigo Boito, Leoncavallo, Massenet, Saint-Saëns Y Straus, with which she felt much more comfortable, They served to put that intimacy and emotion in which he is developing so well lately. Their difficulties to huddle were evident, but her impressive track record provides her with enough tables to thrill a waiting audience.

She was very generous in tips. Without much insistence, she offered six encores in which she was very nice and with that desire to please that artists from the American continent show. Tips of the most varied, displaying a versatile repertoire that evoked the musical wealth of his country. The nuances of his voice indicate it.

She was fantastically accompanied on the piano by Hartmut Held. One of the best pianists in the interpretation of Songs. Not in vain did he accompany between 1982 Y 1992 to the legendary baritone Dietrich Fischer-Dieskau.