René Pape debuts with great success in the Lied Cycle 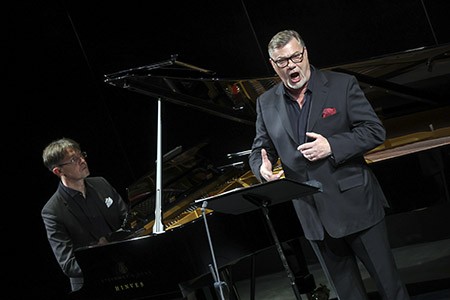 This season the Ciclo de Lied jointly organized by the National Center for the Diffusion of Music and the Teatro de la Zarzuela, has delayed its start until the end of November, but he has done it with the debut in this cycle of the German René Pape. One of the most important voices within the position, increasingly scarce, deep bass. On this occasion he could not be accompanied by his usual pianist Camillus Radicke by indisposition, and accompanied him Michael Sagittarius, who resolved their participation with great professionalism.

For the occasion, an unconventional but extremely beautiful repertoire was chosen.. It started with You who honor the creators of the immeasurable universe (You who adore the Creator of the immeasurable Universe), K 619, by Wolfgang Amadeus Mozart that was heard for the first time in this cycle. He continued this first part with Biblical Songs, on. 99 (1894) de Antonín Dvořák (1841-1904).

The Mozartian piece contained the richness of the composer's styles, to which Pape responded with his beautiful dark timbre, its extraordinary central zone and a homogeneous voice, dense and without artifice. He splurged in addition to a good diction in Czech, in the intimate and collected Songs of Dvořák, the russian, English and, Of course, from his native German.

The second part began with Three Shakespeare songs, on. 6, three works by a little-known composer, the British Roger Quilter, with texts by Shakespeare but perhaps in a less suitable frame of mind for Pape, that he was not very comfortable, especially acute.

He finished this second part with the Songs and dances of death, de Modest Mussorgski. On this occasion the German bass found its sound niche, both in the range and in the theatricality of the interpretation. Thus putting a magnificent climax to this varied recital.

He offered three tips and was more relaxed and with a dedicated public. A good debut by a singer that we are more used to seeing perform on an operatic stage., but that has left a very good taste in the mouth in its first and, hope not last, intervention in the Lied Cycle.