Roberto Devereux. Above all voices 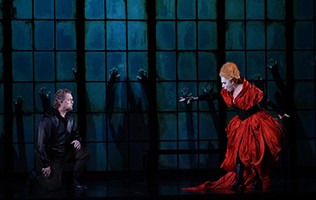 Old woman, Bald and Toothless. This is how he presents Isabel I from England the librettist Salvatore Cammarano in fiction created for the opera by Donizetti. A powerful woman, overcome by his grotesque decrepitude, although his subjects was always the embodiment of virtue.

The season started on Teatro Real with Roberto Devereux. One of the operas of the Tudor trilogy of Gaetano Donizetti plunged into the abyss after the loss of his entire family. An abyss also looks like the dark scenery created by the Australian Alessandro Talevi. Simple and without distracting from music and scenes, something that is always appreciated, but its permanent and almost complete darkness ends up weighing down throughout the representation.

The austere figurines of Madeleine Boyd, niggas how is the stage, they only allowed themselves to adorn with a powerful red Elisabetta. The lighting, that everything darkens, has flashes of elegance and rest for the eyes. All to reflect the suffocation that was breathed in the English court of the seventeenth century.

Joan Matabosch commented at a press conference that Roberto Devereux had been scheduled when the right voices had been obtained. And certainly the voices are the true treasure of this production that comes from the Cardiff Opera. For another time we will leave the discussion about the convenience of premiering a season with a play for rent in a theater like the Real.

It is not easy to face a character like Elizabeth I in any of the works of the Tudor trilogy. But it is undoubtedly Roberto Devereux's Elisabetta who has the greatest difficulties. A soprano is needed with ease for dramatic agility and good support for the lower notes.
A Pushed agile and delicate not easy to find. Maria Callas, without going further, faced Anna Bolena, giving us some of the best characterizations of the character, but he never faced or Maria Stuarda ni a Roberto Devereux.
The great Joan Sutherland she played María Stuarda on numerous occasions and on some occasions Anna Bolena, already very late in his career, but she never dared to play the role of Elisabetta by Roberto Devereux. Further from its oral possibilities for being more dramatic than lyrical.

Possibly be Mariella Devia one of the best sopranos currently tackling this complicated role. Master all of the character's terrains. Of intense drama, without abandoning the marked belcantism of Donizetti. It lacked a little more support in the bass, those that accompany the most dramatic moments of the character, I don't know if it is due to tessitura or maturity.

She herself confessed that she had never played a character older than her before. La Devia, their 67 years, is able to stay above the orchestra with a pianisimo. The volume of his voice is extraordinary. When I am young I want to be as is now Mariella Devia. its "Ah come back what I hope for", along with the dramatic ending, have been the moments of greatest intensity.

If Isabel I was well represented with the great Mariella Devia, no less important has been the interpretation of Gregory customer, in charge of the role of Roberto Devereux. Its beginning with “Royal Woman!” with a forceful and enameled voice, marked the line of his performance, full of elegance and accompanied by its imposing stage presence. The heroic nuances that he prints on his characters are always in that bel canto line that dominates so beautifully.

Marco Caria did not clash at any time of the extraordinary cast. His Duke of Nottingham stood tall. Although we would have liked to hear the headline originally planned, Alessandro Luongo.

Another of the great winners of the night was the Valencian Silvia Tro Santafe. Its edge line is extremely refined. Like his exquisite phrasing and those tightly packed highs so moving and unusual in an alto. Its booming bass, his beautiful timbre and a mighty voice were evident in his interventions. Mainly outstanding was in the duet with Roberto of the second act, and the “All’ambrascia ond’io mi struggo”, duet with her husband, Duke of Nottingham, in the third act. We hope to hear it again soon in Madrid.

The chorus Intermezzo, that character that embellishes all the works in the Royal Theater, was in his line of usual delicacy. Protagonist in some of the moments of the scene with the greatest dramatic load.

Teacher Bruno Campanella proves to be one of the greatest experts in belcanto in command of the musical direction. His deep knowledge of the score and the character of the work allowed him to be emotional in the overture, especially the bars of the England anthem, and with agility, verve and drama appropriately distributed. Only a little anger was lacking in some moments.

A good start to the season. The first completely made by Joan Mataboch. We are looking forward. This is just beginning.