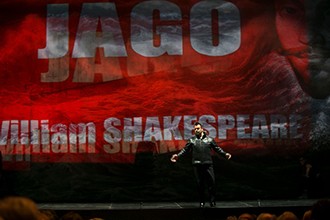 Memorable representation of Otello what took place the day 1 of August, in this edition of Festival Peralada Castle. An uncertain meteorology, propitiated continually look heaven in the presence of clouds-indeed, the night before had discharged a heavy storm- that could portend rains with the consequent suspension of representation. Fortunately, He could be seen this truly magnificent musical and theatrical Otello to level. In this new coproduction, commissioned by the Peralada and Macerata Festivals, the murcian Paco Azorín, as stage director, spins all the action around the wicked and manipulative Yago, masterfully performed by Carlos Alvarez, whose absolute mastery of the stage is already evident in the prolegomena of the performance, moving like a true "master of ceremonies", attentive to all the details, even, urging the head of lighting technology to change the big label of the show “Otello de Giuseppe Verdi”, by “Yago de William Schakelespeare”.

Azorín shows his predilection for the English playwright, when inserting, very aptly in the context of the action, his beautiful sonnets 43 Y 138, whose texts projected on the stage curtain introduce Acts II and IV. The scenography designed by Paco Azorin, results of absolute simplicity consisting of two large solid blocks, who are taking different positions and, at times, fit a steep central staircase. The blocks have ramps that allow the characters to position themselves in different dramatic planes. The scenic effects are complemented by various projections designed by Pablo Chamizo: a stormy sea at the start of the opera, and in whose end that beautiful sea is shown in total calm, as the background of the inert and intertwined bodies of Otello and Desdemona already united for all eternity.

As well, that willow tree that sets Desdemona's song, that is losing its leaves, turning into a sinister forest, as the scene drifts towards its tragic end, or that infernal reddish background in the development of the intense and dramatic duo of Otello and Yago, at the end of Act II. Y, when Iago is introducing the demon of jealousy into Otello, The silhouettes of Desdemona and Cassio can be seen in shadows, conversing, image manipulated by Iago makes Otello believe in the love relationship of both. The attractive lighting design by Albert Faura, complete this successful staging. The costumes designed by Ana Garay It is timeless and black in the clothes of all the characters, in contrast to the immaculate white that the naive and innocent Desdemona always wears.

In Yago's case, and to capture his double game throughout the work, we can see him with a leather jacket, typical of a badass biker, who changes into his official uniform when he is in the presence of Otello.

Notable performance of the Liceu Orchestra, with a detailed address of Riccardo Frizza, differentiating sound planes, seeking to establish tensions and conjugate the moments of greatest sound impact at the beginning of the opera, with others of intense lyricism, as the music that introduces and accompanies the duo of Otello and Desdemona at the end of Act I, or the beautiful musical theme on Desdemona's words “Dammi la dolce, happy word of forgiveness ", that reappears in the course of the Otello-Desdemona and Yago-Emilia quartet (both couples located in different dramatic planes) of Act II. The strong symphonic orchestral introduction of Act III was well executed. Good rendering of the different orchestral sections, although with some metals, at times, so much misfit.

Gregory customer has become in recent years a reference Otello, following in the wake of other great interpreters of this character: Francesco Merli, Ramon Vinay, Mario del Monaco, the recently disappeared John Vickers Y Placido Domingo. For his careful phrasing and total respect for all the notes written by Verdi, Kunde's Otello bears similarities to that of Vickers, although without possessing the serious register exhibited by the great Canadian tenor.

On the other hand, It is truly unusual for Gregory Kunde to be able to sing the Otello Rossini at the Teatro alla Scala within a few days, whose last performance took place 24 of July, and the Verdian Otello in Peralada, he 1 of August. His heroic “Esultate” at the beginning of the opera is already impressive, in contrast to the lyricism offered in his interpretation of the intense duet with Desdemona "Già nella notte densa" with which Act I ends. Ya, in Act II, his great interpretation of “Tu? Back! Flee….Goodbye now and forever ", together with the dramatic duet with Yago “Oh! Monstrous guilt…… Yup, pel ciel marmoreo giuro ”full of heroic accents. His extraordinary and nuanced performance of “Dio! You could have thrown me ", in Act III, where an impeccable phrasing shines, his ability to sing legato, the half voices and some easy and round highs. Doses its sound flow to reach the end of the opera in optimal condition and sing with pathetic and shocking accents "Niun mi tema". Along with his excellent vocality, Gregory Kunde gives a great theatrical performance.

Carlos Alvarez composes an exceptional Yago, combining his magnificent vocality with an extraordinary theatrical performance. This is a character that the great Malaga baritone masters to perfection, and that I was fortunate to hear him when he sang it for the first time, with great success, in the already distant autumn of 2002, at the Teatro de la Maestranza in Seville, with musical direction Jesus Lopez Cobos placeholder image.

In this representation of Peralada, Carlos Alvarez dominates the scene from the very prolegomena of the representation, wasting its evil plot, which concludes at the end of Act III, putting his foot on top of a faded Otello, with the despectiva phrase "Here is the lion". Ya, during the development of Act I, eminently coral, Alvarez shines theatrically in his duets with Roderigo and Casio. In Act II, performs splendidly the recitative-aria “Vanne! Your destination……Credo en un Dio crudel ”where he shows all his nihilism and evil, with a phrasing full of intentionality and emphasis, especially at the end of the aria "E poi? Death is nothing. Heaven is an old story ". His sibylline interpretation of “Era la notte, Cassio was sleeping "interspersed in his long duet with Otello, masterfully concluded when Alvarez and Kunde put their voices together “Yes, for the marble sky I swear ". In Act III his manipulative duo with Cassio “Vieni, the classroom is deserted ", with the presence on a different dramatic plane of a maddened Otello. Raids Eva-Maria Westbroek in various repertoires: wagneriano, bloody, Puccini, Verde, from Janacek, o Lady Macbeth de Shostakovich, they start to take their toll; Y, its powerful vocal media are affected by an ostensible vibrato together with a certain loss of homogeneity in the emission. This is evident in his interpretation of Desdemona, especially in the moments of most delicate lyricism, like the great duet with Otello from Act I, or in their interventions during Act II: dúo with Otello "Of a man who moans" follower of the cuarteto "If unconscious against you, groom, I sinned".

The Dutch soprano gets her best performance in Act III, in moments of greatest dramatic thrust: dúo with Otello “God, you play, or bridegroom…..Fixed fixed "y, especially, in “A terra! And, nel livido mud ”marked with pathetic accents before the contempt and humiliation to which it is subjected by Otello. And in Act IV, better control the broadcast by performing a good performance in "Piangea cantando nell'erma landa" (Willow song), followed by "Ave Maria", full of grace ". Seems to be, que Eva-Maria Westbroek, he was not in full vocal capacity and this was already evident in Otello's dress rehearsal. I remember your splendid Sieglinde (one of his great creations) by La Walkiria, in 2009, next to the Siegmund of Placido Domingo, at the Valencian Palau de les Arts, which marked his debut in Spain. Y, especially, his extraordinary creation of Lady Macbeth from Shostakovich at the Teatro Real in Madrid, in 2011, where I had the opportunity to interview her, in a very pleasant and relaxed conversation conducted in Spanish, where he showed his great admiration for Renata Tebaldi. Listening to a video recording of La Forza del Destino, in 2008, from the Brussels Mint Theater, you can see his magnificent creation by Leonora following the model of Tebaldi, and quite appropriate to the so-called "Verdian song". But nevertheless, the seven years that have passed have not passed in vain.

Report also, in this Otello, the remarkable performance as Cassio of the tenor Francisco Vas, as well as Mireia Pinto in the role of Emilia and Stephen Vincent as Roderigo. Good performance of the Liceu Choir, well run by Conchita Garcia, with his great role in Act I, or the magnificent concertante of Act III. Finally, point out good acting - just as actors- of the six minions of Iago.