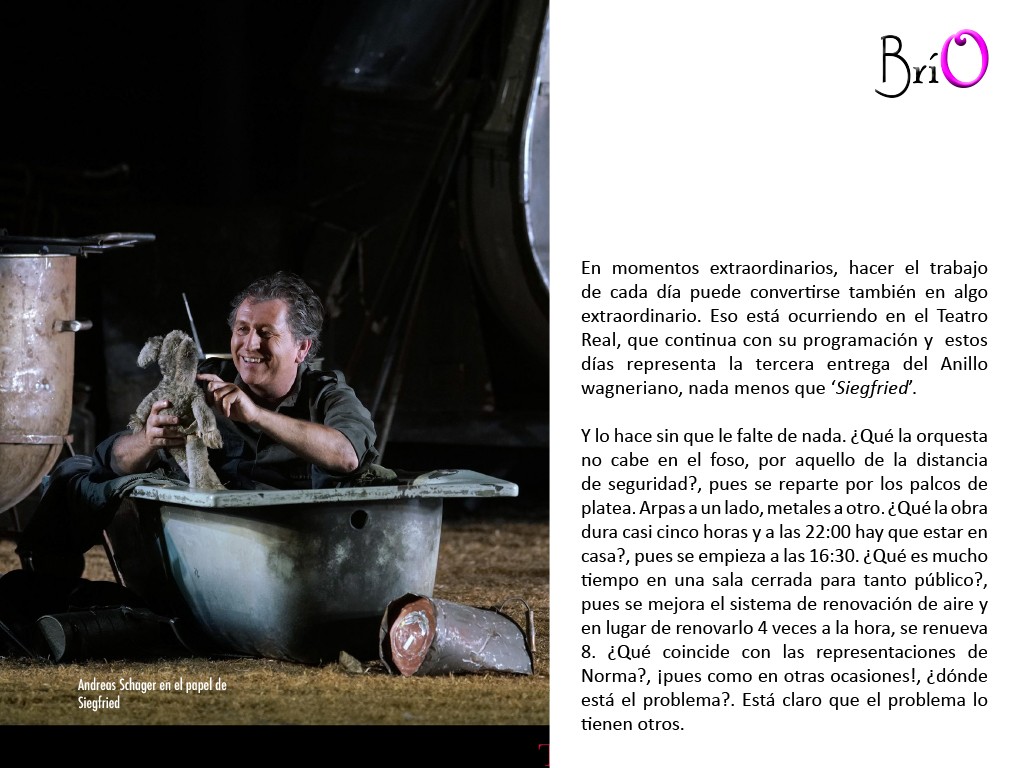 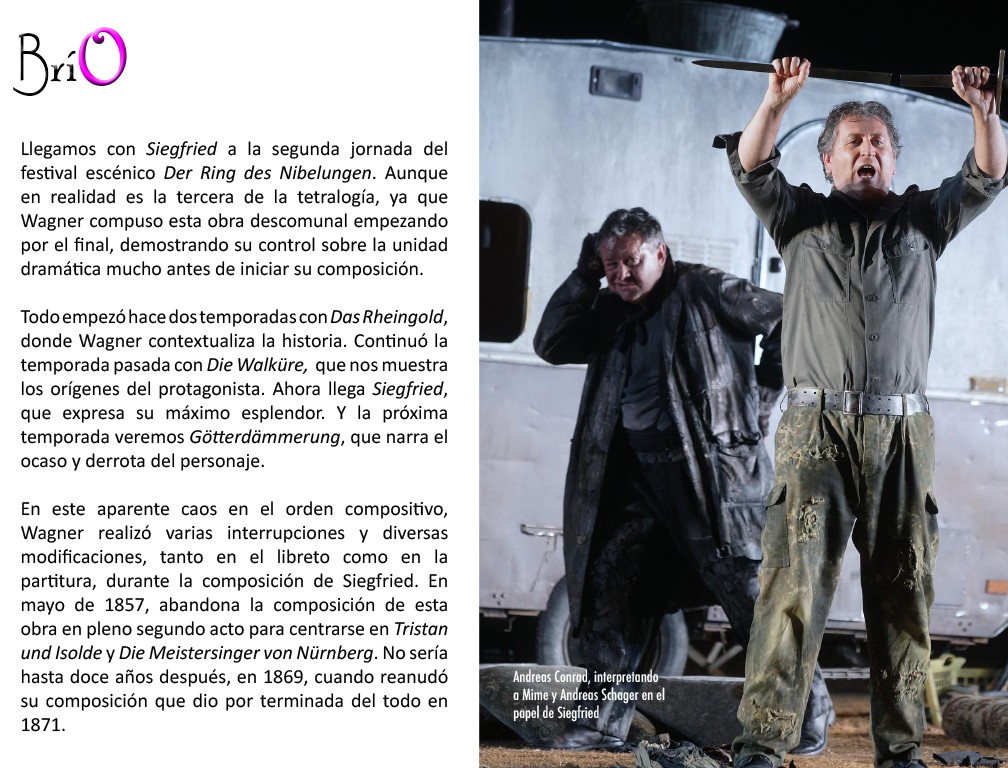 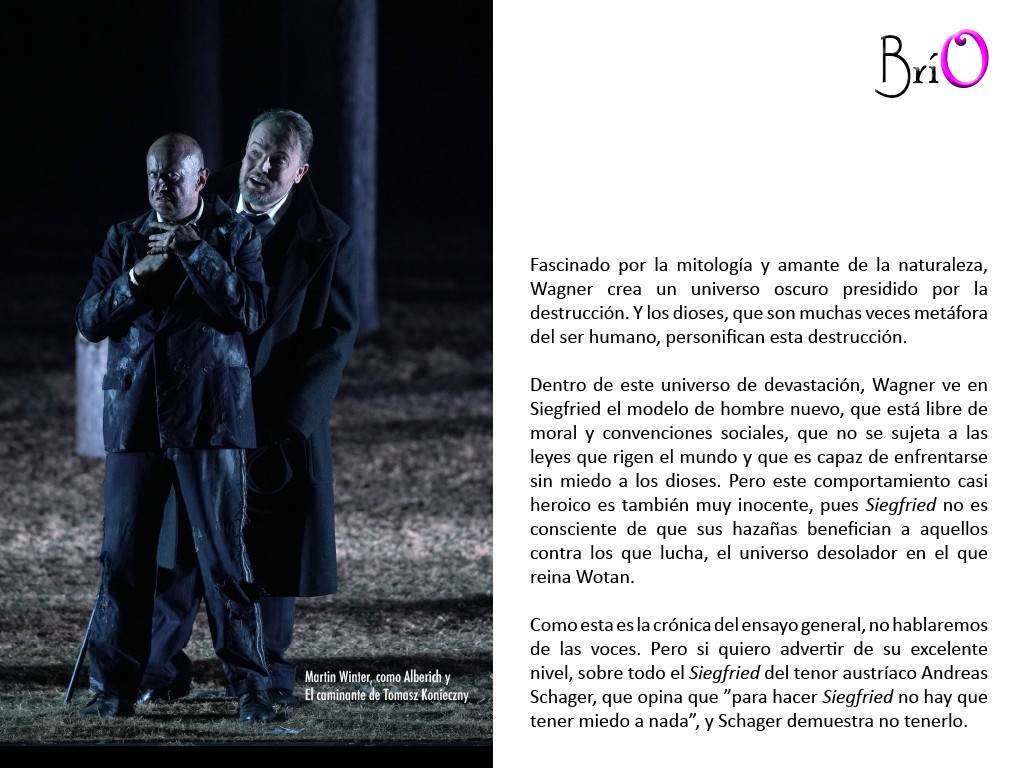 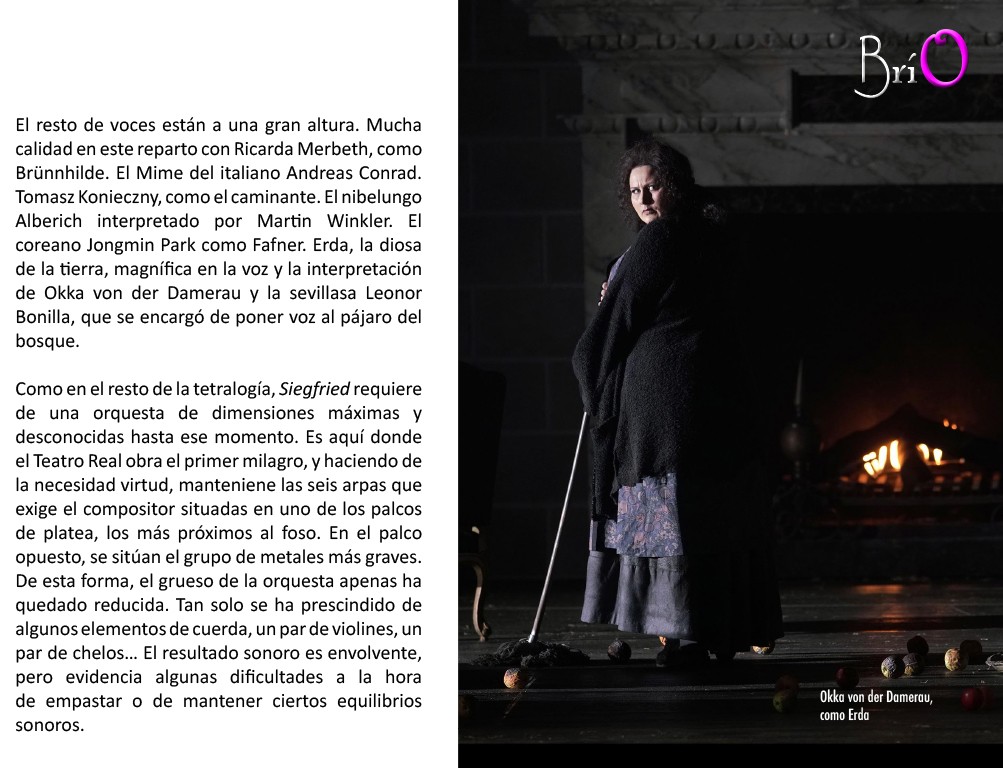 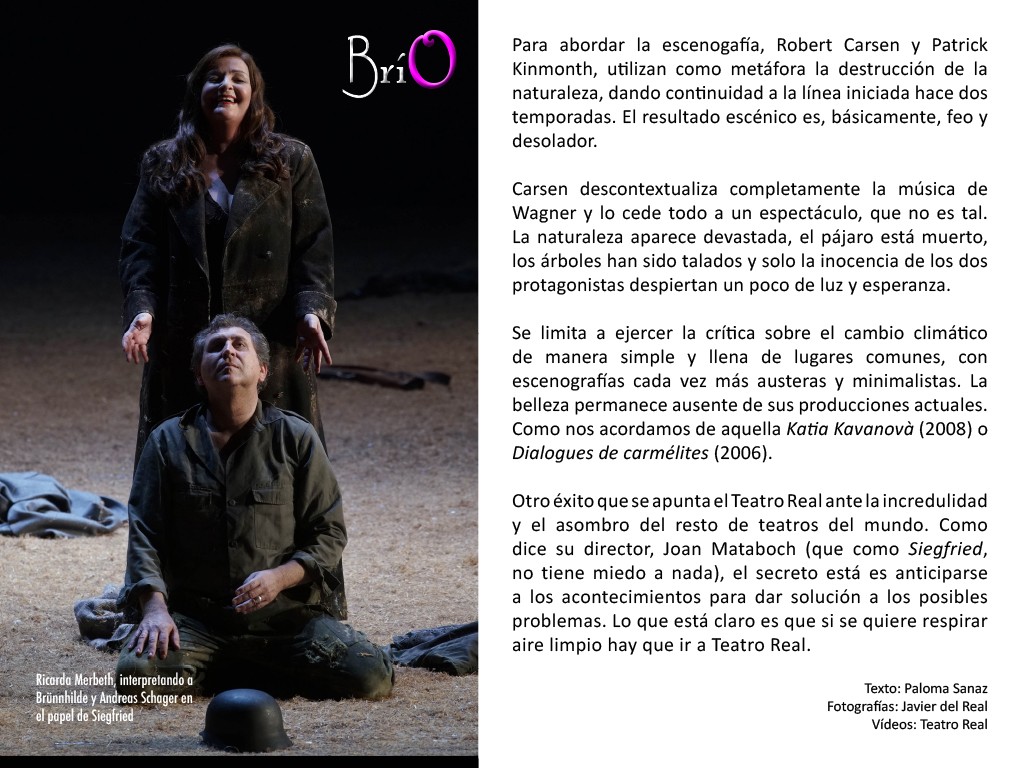 Siegfried, the heroic Siegfried
Richard Wagner (1813-1883)
Second day in three acts of the Der Ring des Nibelungen stage festival
Premiered at the Bayreuth Festtspielhaus in 1876
D. musical: Pablo Heras-Casado
D. scene: Robert Carsen
Escenógrafo y costume: Patrick Kinmonth
illuminator: Manfred Voss
Head of the Royal Theatre Orchestra
Distribution: Andreas Schager, Andreas Conrad, Tomasz Konieczny, Martin Winkler. Jongmin Park, Okka from the Damerau, Ricarda Menzer, Leonor BonillaIn extraordinary moments, doing everyday work can also become extraordinary. That is happening at the Teatro Real, which continues with its programming and these days represents the third installment of the Wagnerian Ring, nothing less than ‘Siegfried.. That the orchestra does not fit in the pit, because of the safety distance?, because it is distributed by the stalls. Harps to one side, metals to another. That the play lasts almost five hours and at 22:00 you have to be at home?, well it starts at 16:30. What is a long time in a closed room for so many public?, because the air renewal system is improved and instead of renewing it 4 times an hour, is renewed 8. What matches the representations of Norma?, Well as on other occasions!, where is the problem?. It is clear that others have the problem: we arrived with Siegfried on the second day of the Der Ring des Nibelungen stage festival. Although it is actually the third of the tetralogy, since Wagner composed this hulking work starting at the end, demonstrating his control over the dramatic unit long before he started writing it all started two seasons ago with Das Rheingold, where Wagner contextualizes the story. He continued last season with Die Walküre, that shows us the origins of the protagonist. Now comes Siegfried, that expresses its maximum splendor. And next season we will see Götterdämmerung, that narrates the decline and defeat of the character.In this apparent chaos in the compositional order, Wagner made several interruptions and various modifications, both in the libretto and in the score, during the composition of Siegfried. In May 1857, leaves the composition of this work in the middle of the second act to focus on Tristan und Isolde and Die Meistersinger von Nürnberg. It wouldn't be until twelve years later, in 1869, when he resumed his composition that he completely finished in 1871.

Fascinated by mythology and nature lover, Wagner creates a dark universe dominated by destruction. And the gods, which are often a metaphor of the human being, personify this destruction.

Within this universe of devastation, Wagner sees Siegfried as the new man model, that is free from morals and social conventions, who is not subject to the laws that govern the world and who is capable of facing the gods without fear. But this almost heroic behavior is also very innocent, for Siegfried is unaware that his exploits benefit those he fights, the bleak universe in which Wotan reigns.

As this is the chronicle of the dress rehearsal, we will not talk about the voices. But if I want to warn of its excellent level, especially the Siegfried of the Austrian tenor Andreas Schager, who thinks that "to make Siegfried you don't have to be afraid of anything", and Schager proves not to have it.

The rest of the voices are at a great height. A lot of quality in this cast with Ricarda Merbeth, as Brünnhilde. The Mime of the Italian Andreas Conrad. Tomasz Konieczny, like the walker. The Nibelung Alberich played by Martin Winkler. The Korean Jongmin Park as Fafner. here, the goddess of the earth, magnificent in the voice and the interpretation of Okka von der Damerau and the Sevillian Leonor Bonilla, who was in charge of giving voice to the forest bird.

As in the rest of the tetralogy, Siegfried requires an orchestra of maximum dimensions and unknown until then. It is here where the Royal Theater works the first miracle, and making virtue of necessity, he maintains the six harps required by the composer located in one of the stands, those closest to the pit. In the opposite box, the group of most serious metals is located. Thus, the bulk of the orchestra has barely been reduced. Only a few rope elements have been dispensed with, a pair of violins, a couple of cellos… The sound result is enveloping, but it shows some difficulties when it comes to filling or maintaining certain sound balances.

To tackle the scenery, Robert Carsen y Patrick Kinmonth, They use the destruction of nature as a metaphor, giving continuity to the line started two seasons ago. The scenic result is, basically, ugly and bleak.

Carsen completely decontextualizes Wagner's music and gives everything to a show, which is not such. Nature appears devastated, the bird is dead, the trees have been cut down and only the innocence of the two protagonists awakens a little light and hope.

It limits itself to criticizing climate change in a simple and commonplace way, with increasingly austere and minimalist scenographies. Beauty remains absent from his current productions. How we remember that Katia Kavanovà (2008) o Carmelite dialogues (2006).

Another success that the Royal Theater points to before the disbelief and astonishment of the rest of the theaters in the world. As the director says, Joan Mataboch (that like Siegfried, He is not afraid of anything), the secret is to anticipate events to solve possible problems. What is clear is that if you want to breathe clean air you have to go to the Royal Theater.