Street Scene, the masterpiece of Kurt Weill in Real 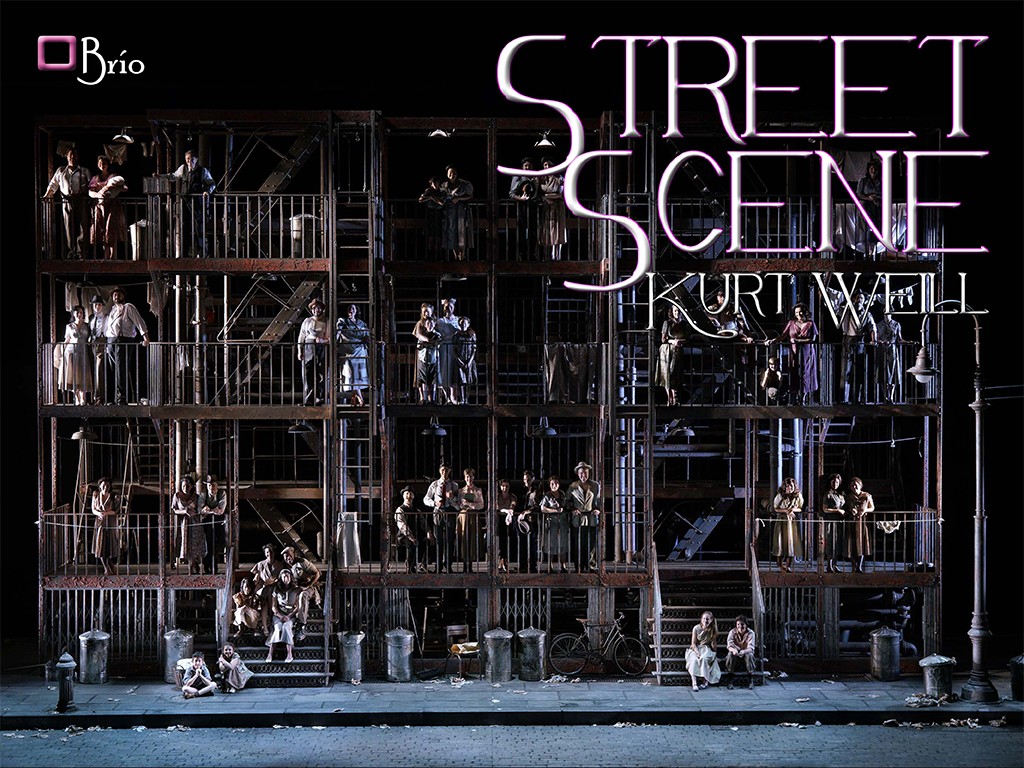 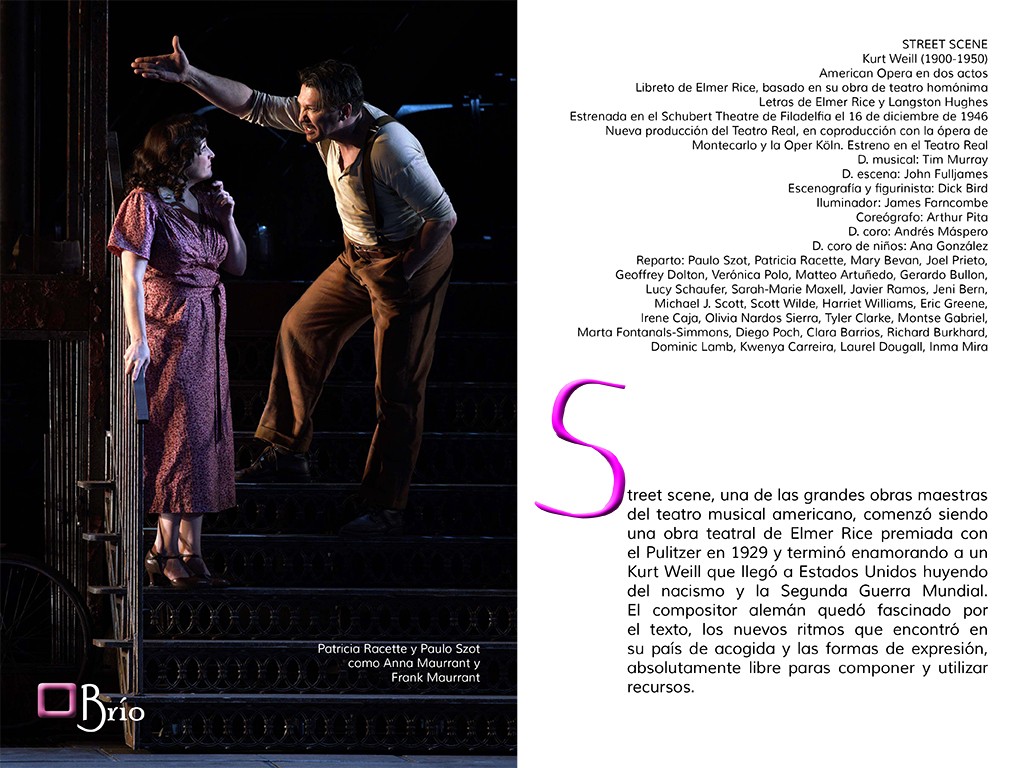 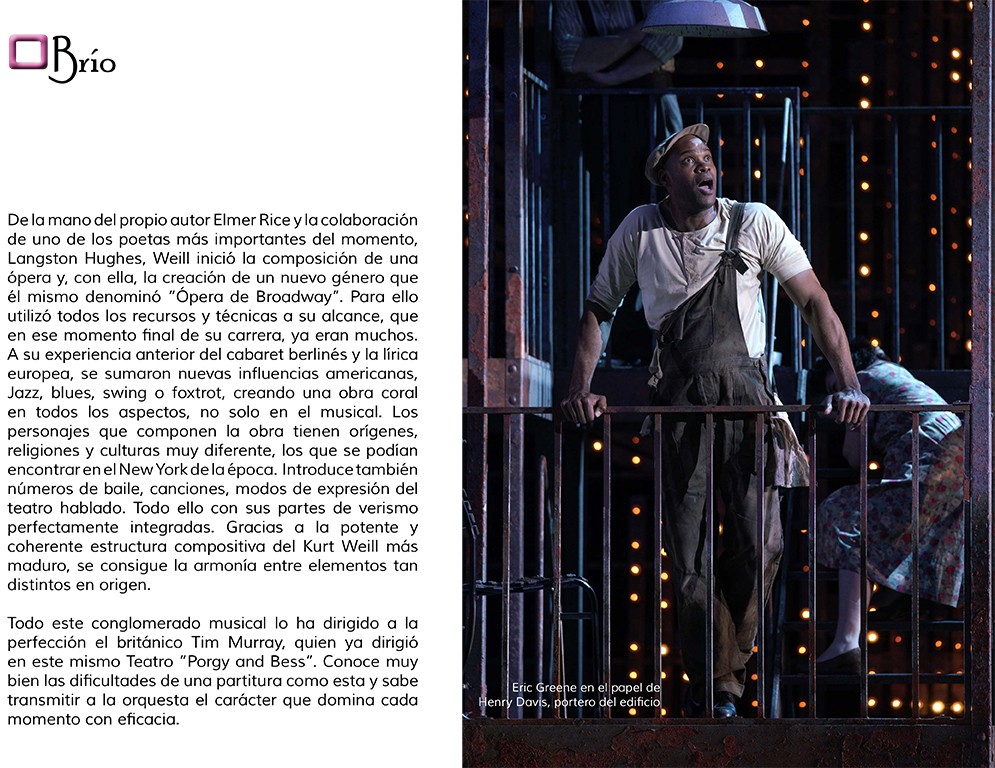 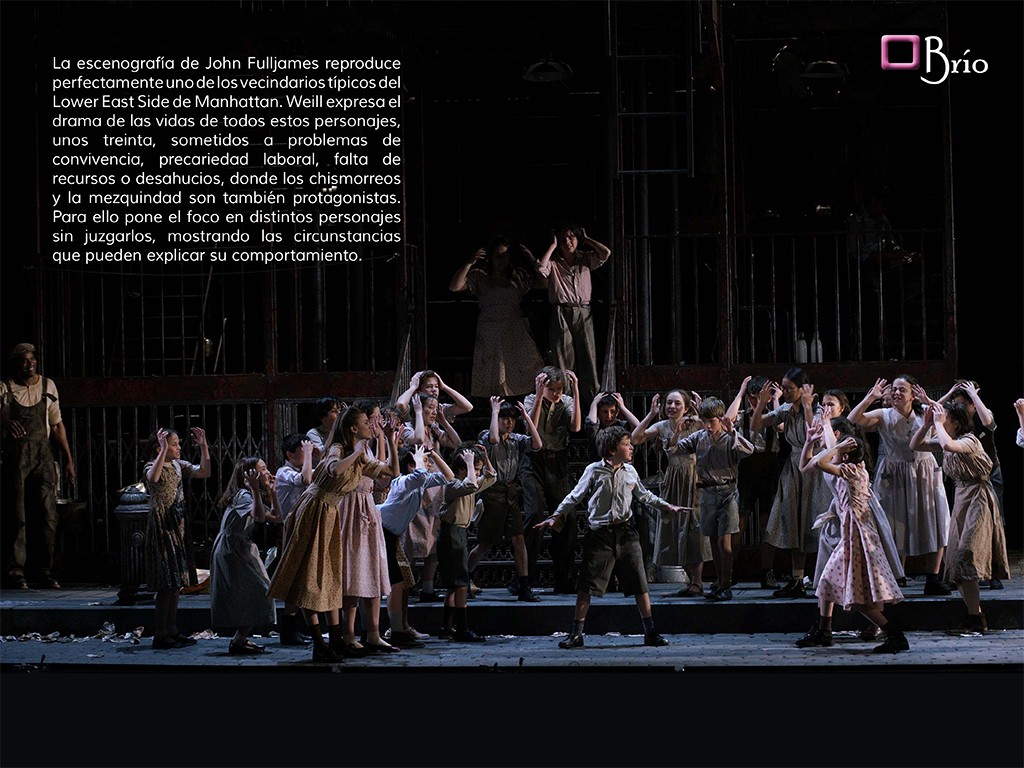 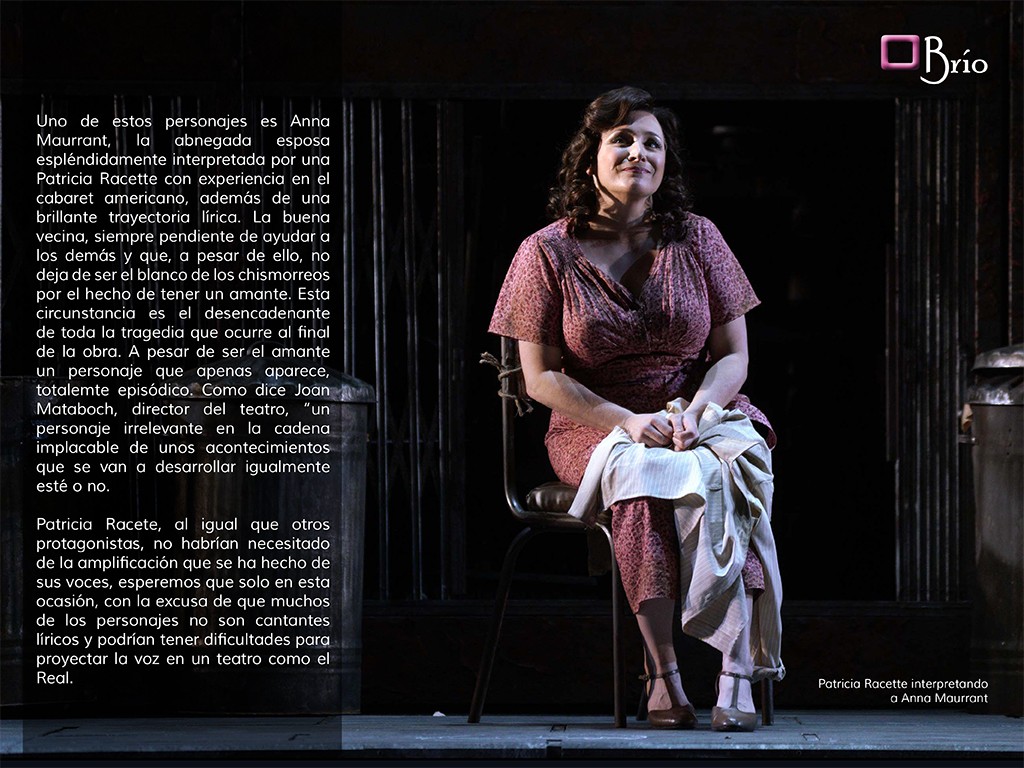 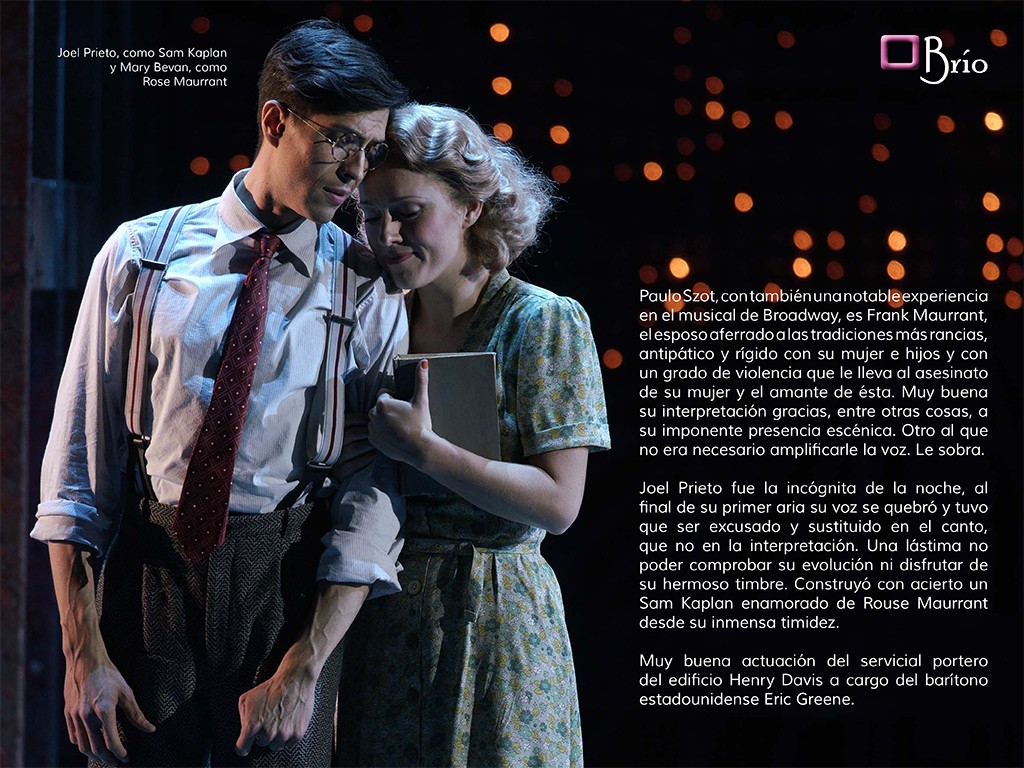 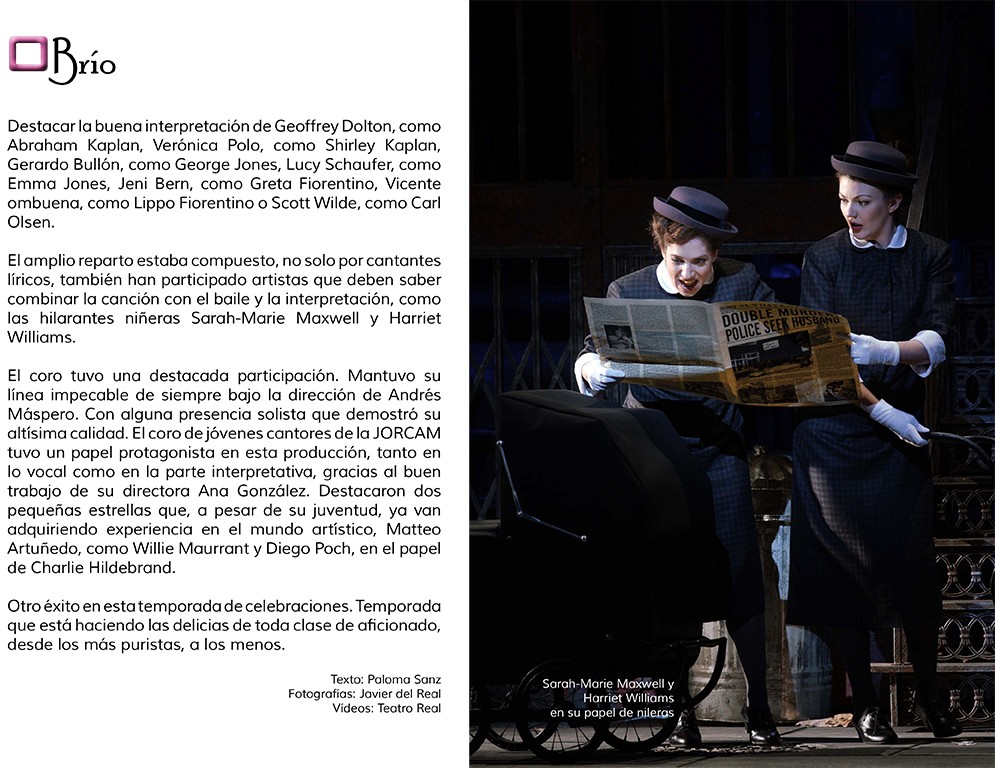 Street scene, one of the great masterpieces of American musical theater, It began as a play by Elmer Rice awarded the Pulitzer in 1929.Y ended up falling to a Kurt Weill who came to the United States fleeing from Nazism and World War II. The German composer was fascinated by the text, new rhythms found in their host country and forms of expression, absolutely free stop writing and use resources.

Directed by the author Elmer Rice and collaboration of one of the most important poets of the moment, Langston Hughes, Weill began the composition of an opera and, with her, creating a new genre he himself called "Opera Broadway". It used all resources and techniques at your fingertips, at that final moment of his career, and there were many. A previous experience of the Berlin cabaret and European lyric, They joined new American influences, Jazz, blues, swing o foxtrot, creating a choral work in all aspects, not only in the musical. The characters that make up the work have origins, religions and cultures very different, which could be found in the New York of the time. also introduces dance numbers, songs, modes of expression of spoken theater. All with parts of verismo perfectly integrated. Thanks to the powerful and coherent compositional structure of Kurt Weill more mature, harmony between different elements is achieved as originally.

All this musical conglomerate has led to perfection Britain's Tim Murray, who already he headed in this Theater "Porgy and Bess". He knows the difficulties of a score like this very well and knows how to convey to the orchestra the character that dominates every moment effectively.

The scenery of John Fulljames perfectly reproduces one of the typical neighborhoods of the Lower East Side of Manhattan. Weill expresses the drama of the lives of all these characters, about thirty, subject to problems of coexistence, job insecurity, lack of resources or evictions, where gossip and meanness are also players. For it puts the focus on different characters without judging, showing the circumstances that can explain their behavior.

One of these characters is Anna Maurrant, the dutiful wife splendidly played by a Patricia Racette with experience in the American cabaret, along with a brilliant lyrical path. Good neighbor, always looking to help others and, Nonetheless, no longer the target of gossip by the fact of having a lover. This circumstance is the trigger for all the tragedy that occurs at the end of the work and, but nevertheless, the lover, is a character who only appears, It is Episodic. As Joan says Mataboch, theater director, "a character irrelevant in the relentless chain of events that will develop equally whether or not.

Patricia Racete, like other protagonists, they would have needed no amplification that has made their voices, Hopefully this time only, with the excuse that many of the characters are not opera singers and may have difficulty projecting the voice in a theater like Real.

Paulo Szot, with also a remarkable experience in the Broadway musical, es Frank Maurrant, the husband clung to the most ancient traditions, unfriendly and rigid with his wife and children and with a degree of violence that leads to murder his wife and her lover. Thanks very good interpretation, among other things, its imposing stage presence. Another that it was not necessary amplificarle voice. to spare.

Joel Prieto was the mystery of the night, at the end of its first aria her voice cracked and had to be excused and replaced in singing, not in the interpretation. Too bad not being able to check your progress and enjoy its beautiful timbre. He built right to strike a Sam Kaplan in love with Rouse Maurrant from his immense shyness.

The large cast was made, not only for opera singers, They have also participated artists who should know how to combine the song with dancing and interpretation, as babysitters hilarious Sarah-Marie Maxwell and Harriet Williams.

The choir had an outstanding participation. He maintained his flawless line under the direction of Andrés Máspero. With some solo presence demonstrated its high quality. The choir of young singers of the JORCAM played a leading role in this production, both vocally and in the interpretive part, thanks to the good work of its director Ana González. They noted two small stars that, despite his youth, and they gain experience in the art world, Matteo Artuñedo, Willie Maurrant and Diego Poch, in the role of Charlie Hildebrand.

Another success this season of celebrations. Season is delighting all amateur, from the purists, the less.