Tristán e Isolda. From the concrete to the infinite 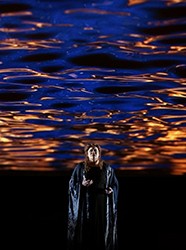 Human science is not able to understand. No experience can describe. Only the one who has been there knows what it means. Although there are no words to express it”. (John of the Cross)

With these words tried Bill Viola to explain the true meaning that it has Tristán e Isolda. Isnpirado by one of the mystics who has most influenced his work.
Wagner he went to Listzt by letter 1854 in this way: “Since I have not known life the true happiness of love, I want to erect a monument to the most beautiful of dreams, in which must be met, from beginning to end, that love”. This idea, fruit of the stormy love between Wagner and Mathilde Wessendonck, influenced various works of the German composer and, especially, in Tristan and Isolde.

Wagner's claim to create "the art of the future”, fully satisfied seen in production these days is represented in the Teatro Real in Madrid. Bill Viola video recordings add, adding beauty, this score so demanding both for the orchestra and for singers. A requirement that the public moves to the wealth of information that provides music, the script, scenography and projections. The depth with which all these elements are expressed, its wealth and its contradictions, They create a unique and extraordinary intellectual and artistic experience, that immerse the viewer in an ocean of sensations of such magnitude, that is overwhelming.

A CHORD WITH ALL BEGAN
The work begins with a chord of three notes in a serious and ascending register of the cellos in unison. This is the great peculiarity and greatness of Tristan and Isolde. A chord that develops throughout the play and only works out to the end, with the death of Isolda. Love solves death dissonance. harmonic and only treatment is thus created, never before heard, from that moment that will change the approaches of musical structure. He "Tristan chord”, which always pushes forward in an infinite musical envelope just relax in a couple of interludes. The harmonic richness and the fact that all the instruments of the orchestra play in continuity, always moving from darkness to light, from the concrete to the infinite, on an emotional journey that only resolved at the last minute.

THE PLOT
Wagner described as Tristan and Isolde "plot”, (action, plot). A timeless opera, that it is not based on any historical event, but something mythological. Shows two frames or two worlds, the real, rational or contrived, they belong Brangäne, Kurwenal, Melot and King Marke; and the inner world, the world of the heart of Tristan and Isolde.
That inner world, which confuses day and night, space time, and brilliantly it describes the score Wagner. The composer should focus on this inner frame in the absence of specific events or stories. The actions corresponding to real life, to that to which the two protagonists live outside, They develop in the end of each act. The rest of the work belongs to the realm of dreams.
It is this field of dreams which is brilliantly reflected in the videotaping of Bill Viola. No one has described with images what Wagner said in his score the way it does Viola. The cadence of an infinite time flowing with music. pictures, like the music, They never stop. Viola wants to represent the flow of life. You whatever happens nothing stops. Two completely different walking speeds surprisingly unison. A plastic beauty that borders on genius and marks a harmonious discourse. Poetry in motion that accompanies and describes the scenes providing magic.
Water is the conductive element for Viola. What used to facilitate the timelessness and create an atmosphere in which it can, float up. In contrast is the fire, in which vanishes Isolde, Tristan as it does in the water. Magic is the moment when Tristan and Isolde are immersed, literally, in profundidaz feelings after taking the filter of love.

Little has changed since the premiere staging of this production in Paris, in 2005. Peter Sellars He created the most discreet of his stage productions. That nothing distracts, It had to be used by the maximum Sellars, and it has been the most successful decision. The result is the refinement and quietness of characters expressing, through the containment, the intense feelings that music and images put on stage.

Darkness is a feature of this production, creates atmosphere of introspection and mystery, but the lighting is not always the right one. Neither it is well resolved the presence on the scene in the second act of Kurwenal. Forced to sing idly and hieratic attitude.

Bright and spectacular is the entrance to the King Marke at the end of the first act, down the center aisle of the stalls while the choir sings on the balcony of the fourth floor while the entire theater is illuminated. They are very well used these scenic resources so rarely used, and contribute to the effect of the entire work envelope.

Substitution in the musical direction of Teodor Currentzis by the French Marc Piollet, He had generated some concern. Especially if it occurs with just one month in advance. Ya the opening, any doubt was cleared respect. The relationship established between the conductor and orchestra, It produces a deep sound, a tempo well run. A strict interpretation of the score. With excessive sound volume sometimes, that afearon some moments that should be more sensitive. The sound of the strings was extraordinary, and the effect of some instruments placed in boxes, finally he beautified the whole.

Violeta Urmana it complies to face a work of Wagner with guarantees and solvency: power and resistance. Power is needed to avoid being swallowed by the torrent that reaches orchestral waves from the ditch. Resistance is essential to maintain the intensity for a work of these dimensions. This intensity was evident in his magnificent "Love Death” final, shivery. A powerful Urmana always on stage. Offering a heartfelt drama and excited, Isolde composing a sharp and haughty. Consistent and voluminous voice, which he spared no sobreagudo and which only lacked one point more than emotionalism at times. It was the most rewarded by the audience. A public increasingly cold ,which reserves the effusiveness for boos and left the room at the speed of an ordinary parliamentary.

the tenor Robert Dean Smith It is a width appropriate for a lyric I Tristan. Too bad you only listen to the most lyrical fragments, when the orchestra did not accompany him. The rest of the time he was just intuited low volumes of the orchestra and vigorous Isolde. We trust you have, at least, good self-esteem.

Ekaterina Gubanova, as Brangäne, with a strong, intense voice, He had some emotional moments, their warnings to lovers of the second act from the fourth floor. Onstage he knew very well unfold. It is not always easy to sit still.

One of the best voices was that of King Marke played by Franz-Josef Selig. deep, authoritarian and majestic. Center vocal well-defined, balanced and elegant sound. Its interpretation is a question I, Will I seemed to understand that Marke is in love with Tristan?. Would be, in any case, Sellars license.

No doubt this Tristan and Isolde is the most intense seen in the newly renovated Royal Theater, something much appreciated in an already, per se, intense season.
Thank you, monsieur.