Turandot at the Royal Theater, lights and shadows 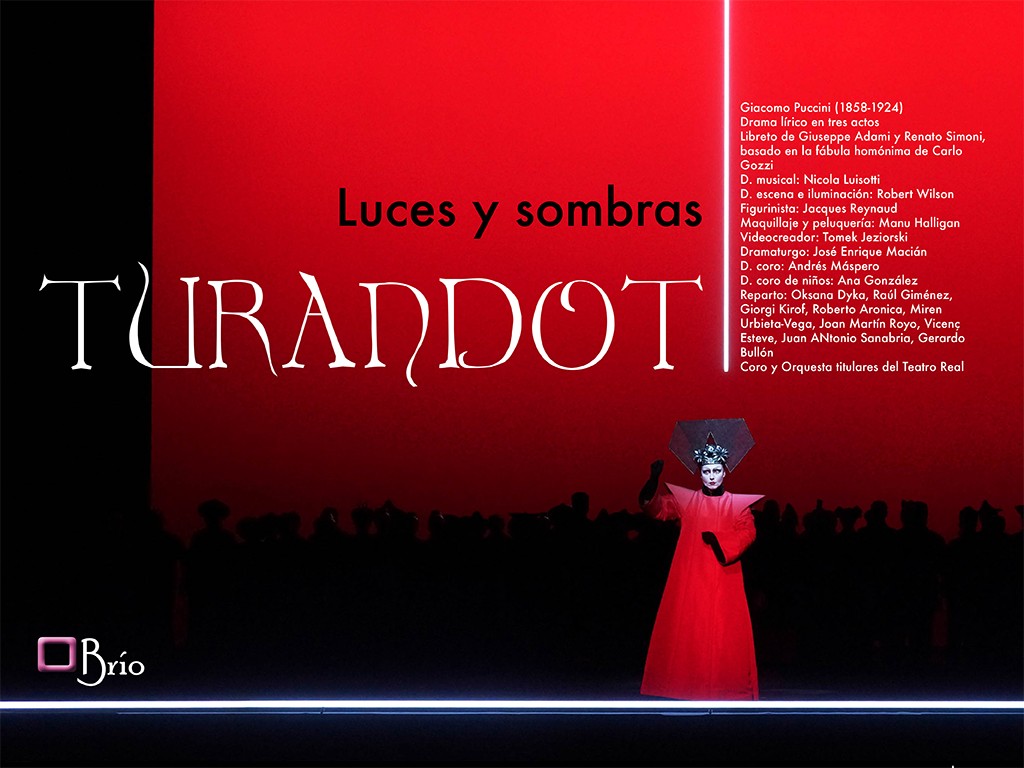 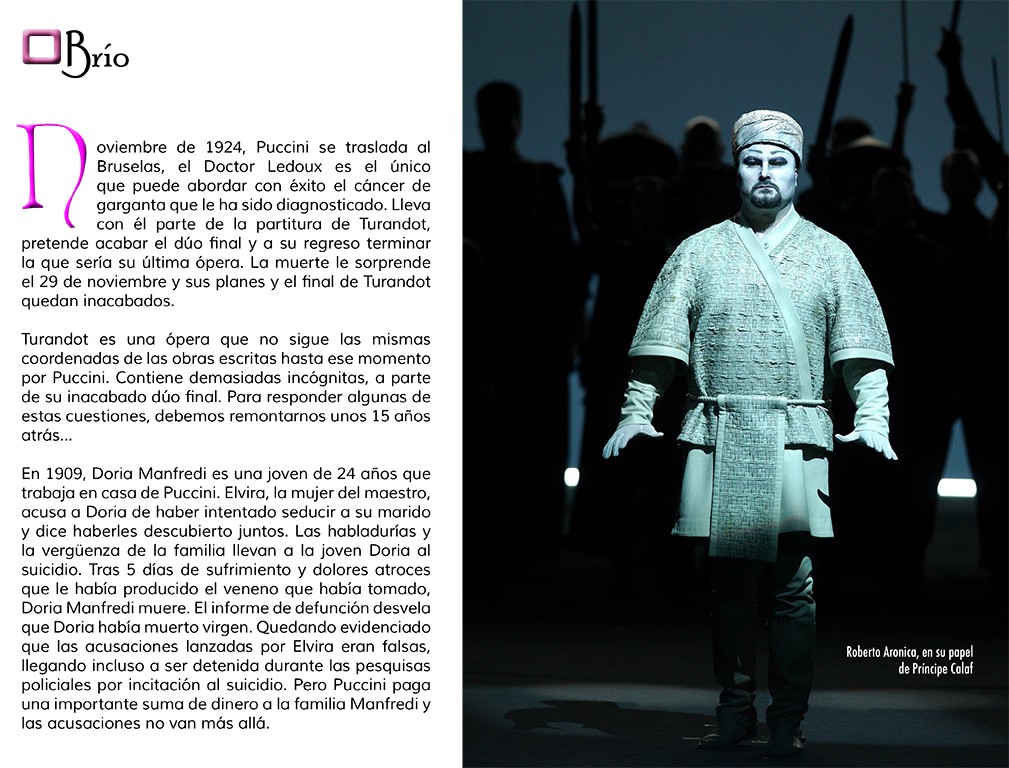 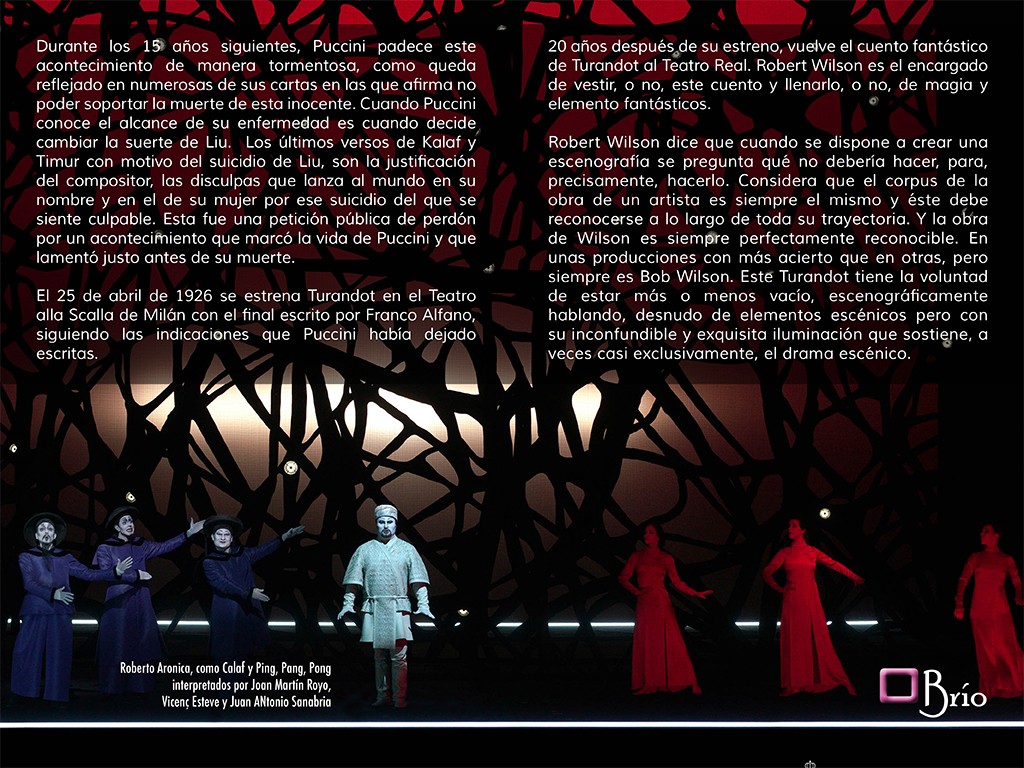 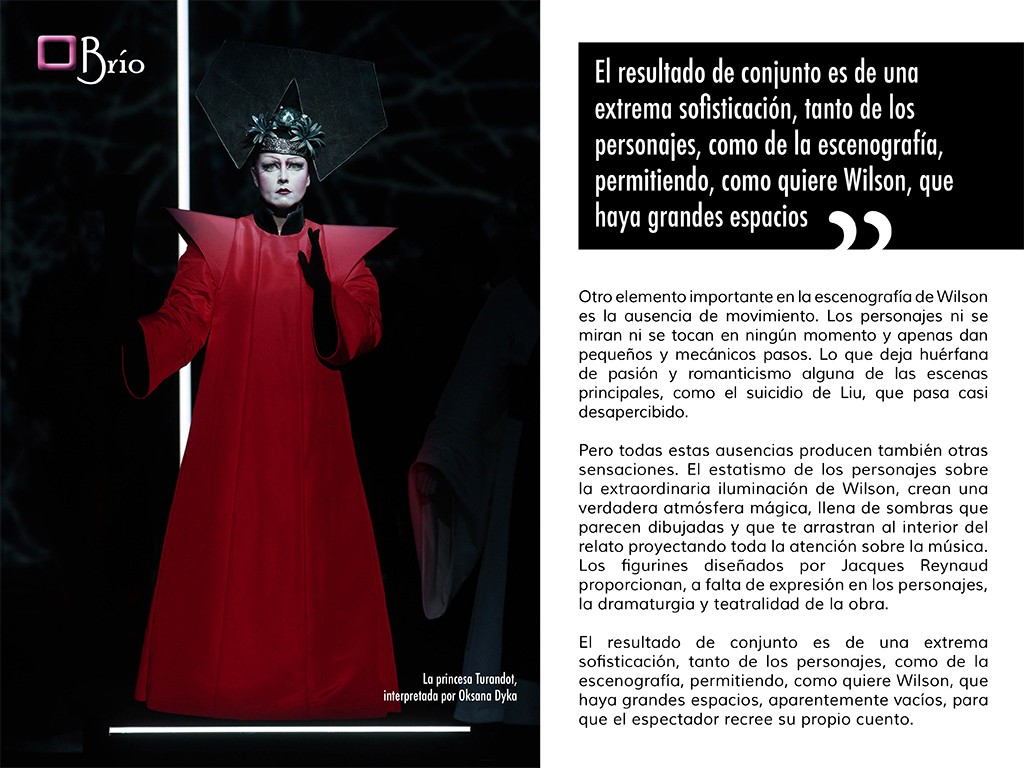 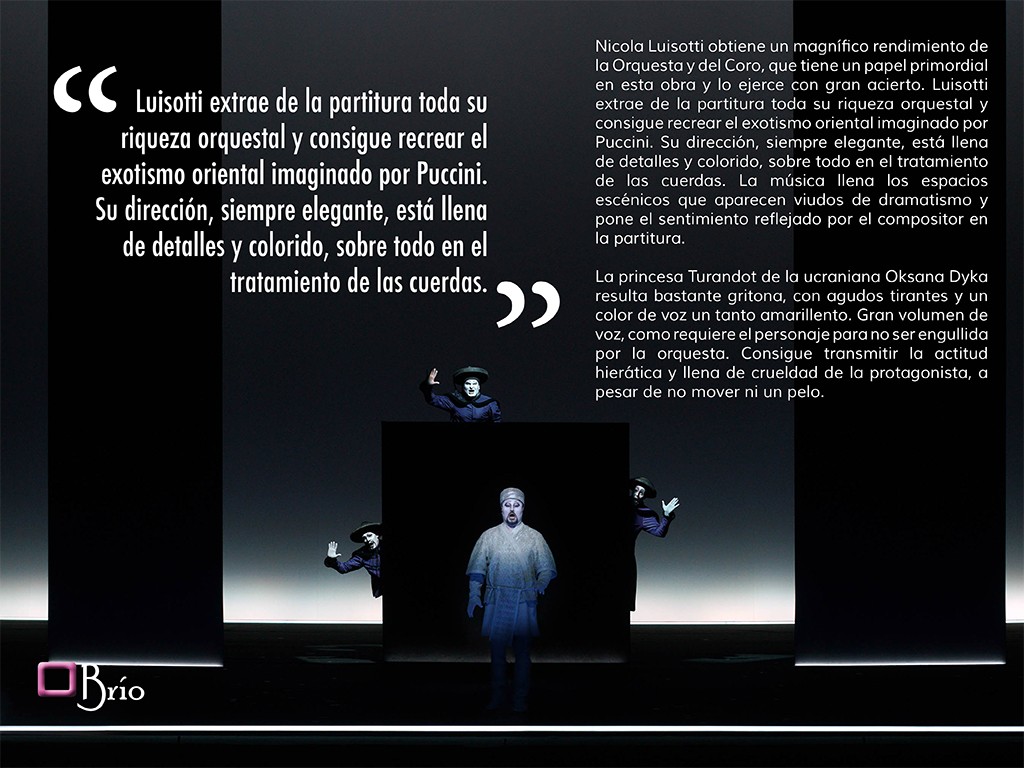 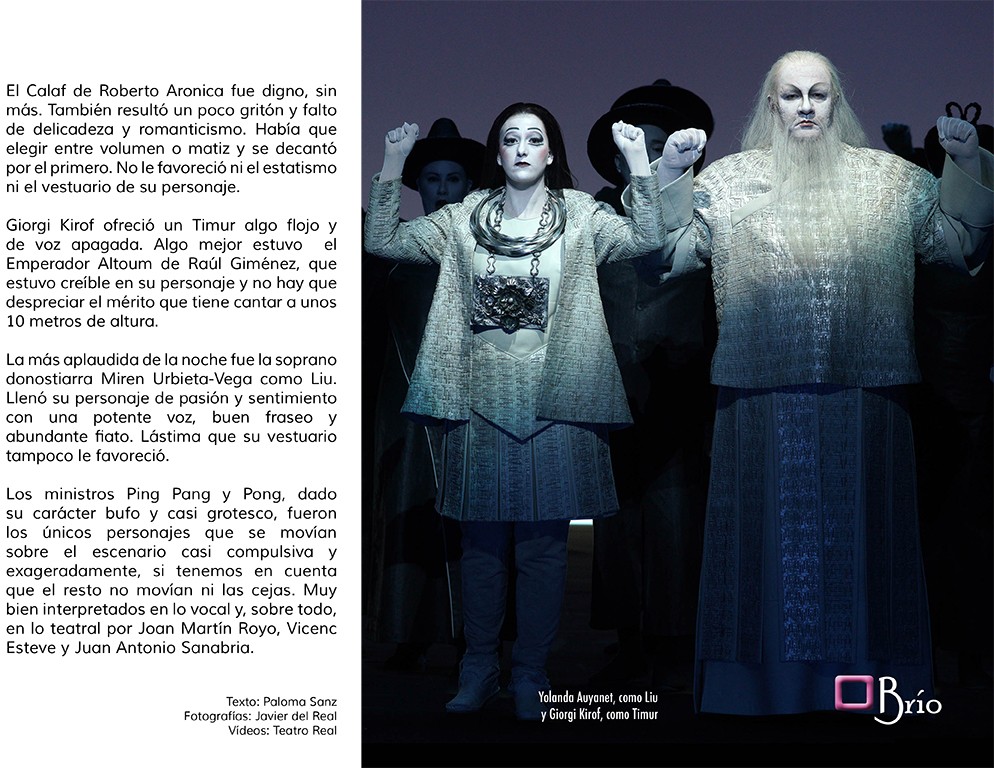 Turandor, Giacomo Puccini look and shadows (1858-1924) lyrical drama in three acts Libretto by Giuseppe Adami and Renato Simoni, based on the homonymous fable Carlo Gozzi D. musical: Nicola Luisotti D. scene and lighting: Robert Wilson Figurinista: Jacques Reynaud makeup and hair: Manu Halligan Videocreador: Tom Jeziorski Dramaturgo: José Enrique D Macián. choir: Andres Maspero D. children's choir: Ana González Cast: Oksana Diving, Raúl Giménez, Giorgi Kirof, Roberto Aronica, Miren Urbieta-Vega, Joan Martin Royo, Stephen Vincent, Juan Antonio Sanabria, Gerardo Bullón Choir and Orchestra of the Teatro Real holders November 1924, Puccini moves to Brussels, Dr. Ledoux is the only one who can deal successfully with throat cancer that has been diagnosed. It carries with it part of the score of Turandot, It aims to finish the final duet and on his return to finish what would be his last opera. Death is surprised at the 29 November and plans and the end of Turandot remain unfinished. Turandot is an opera that does not follow the same coordinates of the works written so far by Puccini. It contains too many unknowns, part of his unfinished final duet. To answer some of these questions, we must go back a 15 years ago… In 1909, Doria Manfredi is a young 24 years working at home Puccini. Elvira, woman teacher, Doria accused of having tried to seduce her husband and says haberles discovered together. Gossip and shame of the family lead to suicide young Doria. After 5 days of suffering and excruciating pain that had given him the poison he had taken, Doria Manfredi dies. The report reveals that death had Doria died a virgin. It is shown that the accusations were false Elvira, even to be arrested during police investigation for incitement to suicide. But Puccini pay a large sum of money to the Manfredi family and accusations do not go beyond. During the 15 following years, Puccini suffers from this event stormily, as it reflected in many of his letters in which he claims not to endure the death of this innocent. When Puccini knows the extent of his illness is when you decide to change the fate of Liu. The last verses of Kalaf and Timur connection with the suicide of Liu, They are the justification of the composer, Apologies throwing the world in his name and on his wife for the suicide who feels guilty. This was a public apology for an event that marked the life of Puccini and lamented just before his death. He 25 April 1926 Turandot premieres at the Teatro alla Scalla Milan with the final written by Franco Alfano, following the directions Puccini had left written. 20 years after its premiere, returns the fantastic tale of Turandot at Teatro Real. Robert Wilson is in charge of dressing, or not, this story and fill, or not, magic and fantastic element. Robert Wilson says that when you are creating a stage you're wondering what you should not do, for, precisely, do what. He considers that the corpus of the work of an artist is always the same and this must be recognized throughout his career. And Wilson's work is always perfectly recognizable. In some productions with more success than others, but is always Bob Wilson. This has Turandot will be more or less empty, escenográficamente talking, Naked scenic elements but with its distinctive and exquisite lighting holding, sometimes almost exclusively, stage drama. Another important element is Wilson scenery no movement. Nor the characters look or touch at any time and just take small steps and mechanical. Leaving orphan of passion and romanticism of some key scenes, as suicide Liu, It is passing almost unnoticed. But all these absences also produce other sensations. Statism of the characters on the extraordinary lighting Wilson, create a truly magical atmosphere, full of shadows that seem drawn and draw you into the story by projecting full attention on music. Figurines designed by Jacques Reynaud provided, the absence of expression in the characters, dramaturgy and theatricality of the work. The overall result is an extreme sophistication, both characters, as scenery, allowing, as he wants Wilson, you have large spaces, apparently empty, for the viewer to recreate their own story. Nicola Luisotti get superb performance of the Orchestra and Choir, which it plays a key role in this work and exercises with great success. Luisotti extracted from the entire orchestral score wealth and manages to recreate the oriental exoticism imagined by Puccini. Your adress, always elegant, It is full of details and colorful, especially in the treatment of ropes. Music fills the spaces that appear widowers scenic drama and puts the sentiment reflected by the composer in the score. Princess Turandot Ukrainian Oksana Dyka is quite gritona, with suspenders sharp voice and a color somewhat yellowish. Large volume of voice, as required character to not be swallowed up by the orchestra. Manages to convey the hieratic attitude and full cruelty of the protagonist, despite not move a hair. The Calaf Roberto Aronica was worthy, without further ado. He also was a bit loud and indelicate and romance. He had to choose between volume or shade and chose the first. he did not favor neither statism nor his character's wardrobe. Giorgi Kirof Timur offered a somewhat loose and dully. Something better was the Emperor Altoum Raul Gimenez, which was believable in his character and not to despise the merit sing about 10 meters high. The most applauded of the evening was the soprano donostiarra Miren Urbieta-Vega as Liu. He filled his character with a passion and feeling powerful voice, good phrasing and abundant fiato. Too bad her wardrobe also favored him. Ministers Ping Pang and Pong, given his character and almost grotesque bufo, were the only characters moving about the stage and almost compulsive exaggeratedly, If we consider that the rest did not move or eyebrows. Well interpreted vocally and, especially, in theater by Joan Martin Royo, Vicenc Esteve and Juan Antonio Sanabria. Text: Paloma Sanz Photos: Javier del Real Videos: Teatro Real

Tosca shines at the Teatro Real