A dark Fidelio at the Teatro Real 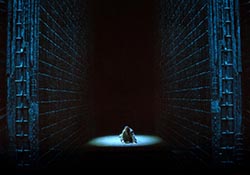 “Since 1981 I have not addressed Fidelio and when I finished I said I would not do”. These words Hartmut Haenchen, director musical de Fidelio 34 years later, perfectly describe the character and the difficulty of this work.

The only opera Beethoven, of which he wrote three different versions and up to four overtures, It has two very different characters or souls who are influenced, each one of them, the operatic tendencies of the moment.

The first part has a clear influence of Singspiel Viennese. Small bourgeois comedy of errors. It was the most popular genre of Vienna Mozart contributed to dignify with works like The Magic Flute or Die Entführung aus dem Serail.
The second source comes from so-called "salvage parts”. Gender well entrenched in France at the end of the French Revolution who always had the same structure: someone is in prison for an unjust cause and is released, through a heroic act, reestablishing justice and order.

Beethoven constructed with these two sources of inspiration a work that begins as a Singspiel, light and fun, and slowly drifting toward the great romantic explosion that is. anecdotal disappears and gives way to the heroic drama.

34 years has taken the musical director Hartmut Haenchen meet again in this work of engineering beethoveniana. Listening to the overture, one could think that maybe should have waited a little longer.

But the doubts disappear hear the interlude scene change before the last act, where the music volume was higher than the rest of the performance, also the intensity and interpretive force, something so far away. Haenchen changed the tradition followed until now in which is usually interpreted the overture Leonore No. 3, interpreting the latest movements of the 5th Symphony. Haenchen showed the teacher know the work to perfection.

His work with the Fidelio manuscripts have enabled the location of numerous misprints that the publisher Alkor Edition Kassel GmbH will rectify through an addendum.

The scenery Pier´Alli, very classic and already represented in the Palau de les Arts Reina Sofia, It has its peculiarities. The video, with increasing presence in operatic productions as a tool that provides a great relief to the set designers, Fidelio achieved in this remarkable effects. A simulated camera takes us into the dungeons of the fortress where he is imprisoned Florestan. Pier'Alli has created a stage full of ambiguous and disturbing elements. It has introduced from the first scenes of torture instruments that are part of the daily scenes of the characters, creating a natural coexistence with foals, guillotines or hiking boots.

With these elements would have been more interesting to see the proposal initially announced scenery of La Fura.

Lighting is almost a character in some scenes. The light, They are returning to free the prisoners inhabiting the fortress, and the absence of that same light describes the situation of the imprisoned hero.

Beethoven, he preferred to dump their efforts in the instrumental rather than vocal, It offers scores that pose a challenge for the singers and chorus. Music is powerful and almost Wagnerian voices are needed to address porte papers.

It has not been the case of the protagonist. Canadian soprano Adrianne Pieczonka, timidly began his speech. With little forcefulness and very fair of breath when it was Fidelio. Much better as Leonore, got moments of great lyricism and drama.

Anett Fritsch It was a spark and life Marcelline. With sufficient volume and good treble sometimes it seemed to rival Leonore. Made good and balanced partner with Ed Lyon, applied tenor who played a friendly Jaquino.

The German-Canadian Michael King, we know of his artistic evolution (It does not miss any season for five), It has among its qualities of elegance in the line of singing, but does not sing badly, It does not make serious errors and gives all notes without being one. Given the difficulties of character, that is a lot.

Franz-Josef Selig. After his unforgettable Marke last season, It has composed an endearing Rocco. Dense timbre voice and warm and dim, He was accompanied with good stage presence and acting.

Alan Held not excited anyone. Baritone is low and Pizarro was not being neat.

He choir, as usual, big!. Some moving prisoners exploded in volume and excitement at the end of the work. Very remarkable the two soloists, Enrique Lacárcel Y Carlos Garcia-Ruiz, with a vocal quality that sometimes not even a star.

Moderate success for this Fidelio. One more night to add to a season that is in danger of starting a routine was. Luckily my knowledge of luxury cars are being completed with the surprising and magical appearances in the lobby of the theater as imposing as unachievable machines. To do box.