“A German requiem”, Brahms, danced by the Ballet of the Rhine 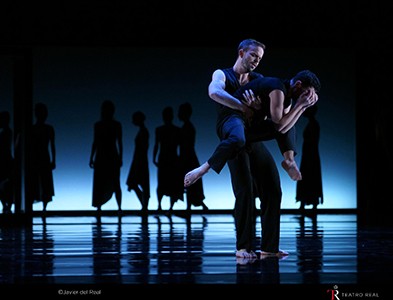 Gradually Madrid is going fond further ballet and dance, and more and more shows of this type that are programmed. The Royal Theatre, who started the last day 12 his ballet season, quality makes the difference. Not many, moment, productions offered throughout the season, but if they are extraordinarily outstanding. This time it has tried one of the best dance companies, he Ballet at Thein Süsseldorf Duisbrg, with choreographer Martin Schläpfer to the head.

They presented "A German Requiem", from Johannes Brahms, one of the most famous works of the composer and composed after the death of his mother in 1865 and his great friend Robert Schumann. But, A requiem how you dance?. Definitely, as does the Ballet of the Rhine in one of his most acclaimed and award-winning choreographies.

This peculiar composition of Brahms delves into more philosophical aspects religious, reflects on life and death from a more human point of view that divine. As the director says, Marc Piollet, It is not a conventional réquiem, It is a work of consolation, because it is not written for the dead but for the living, for those who stay. You can not expect less of a romantic as Brahms.

Taking this closeness to the pain of humans as starting point for creating choreography, has wanted to reflect it fragility presenting human barefoot dancers, in permanent contact with the ground. Also in its creation, Schläpfer wanted to run away from any religious approach and has focused on questions, the fears and concerns of human beings, far from any dogmatism and closer to reflection and emotion. To that end beautiful and allegorical, in which the ties that bind us represent those who have already left. Anyone who has had the opportunity to attend one of the four representations, you will have noticed that both planes, reflective and emotional, They are perfectly stimulated.

Interpret this work has its difficulties, for orchestra, for soloists and, especially, for choir. A chorus accustomed to operatic lyric, It is not easy to address a religious work like this requiem overflowing with delicacy and sensitivity. But the choir Intermezzo, Teatro Real holder, Only surprised if fails, and that not happen this time. They sing with exquisite subtlety and dramatic intensity. Y, Besides, in German. Extraordinary!. Very good also the soloists Adela Zaharia Y Richard Sveda.

If you have not yet come to this artistic expression is dance, not any of the four proposals the Teatro Real has lost this season. Of the 3 al 10 of November, The Nutcracker, a classic. Of the 21 al 26 from January Paris Opera Ballet, choreographed by Jerome Robbins, Hans van Manen y George Balanchine Y music of Claude Debussy, Maurice Ravel, Johann Sebastian Bach e Ígor Stravinsky. Of the 31 March to 4 of April, Dido & Aeneas, from Purcell, in an opera and dance, choreographed from Sasha Waltz. The dance season concludes 4 May with Victor Ullate Ballet.