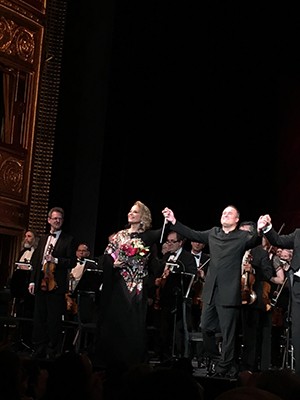 Public! public! public!, It was the cry of Teatro de la Zarzuela stood on Sunday 11 during the emotional statement he read the director Karel Mark Chichon on its behalf and on behalf of Elina Garanca: “Amado public, both Elina and I are here because we love Spanish music, especially zarzuela, and that's why we took her to all over the world. And it is our hope that this great theater continue to defend this genre so Spanish and so unique that is the zarzuela. All our support to this theater and its staff who have treated us like family throughout this week. This theater remains a public theater…”.

It was the culmination of a concert of Spanish music, of both, director and performer, They are connoisseurs and ambassadors. The first part was devoted entirely to "Carmen", which it is not Spanish, but it seems pretty and this is a character who has Garanča well internalized and which is at present one of the best interpreters. The second part, with the participation of the Choir, he devoted himself completely to the Operetta, genre that approach with respect for who knows and values ​​and not the others do floclorismo the gala.

Elina Garanca has a special magnetism on stage. It exhibits a great expressiveness without ostentation. His vocal technique is, simply, perfect. It has all the qualities that a singer can have and have them all at once. She sings with the same ease as others speak. His voice is supremely powerful and agile than enough. Enameled bright and sharp and sturdy and clean dark tones. Masterfully controls regulations, apiana and grows with the same ease and playfulness and intention expressed what the score says. A singing lesson. The Garanča play in another division.

The replica came from a esforzadísimo Andeka Gorrotxategi, I had to put a lot of effort to keep up with such a scene partner. Duos apianados better than trying to match the volume of a voice that Garanča, a difference of Gorrotxategi, He did not show the slightest difficulty.

At the news of the impending "fusion" between the Royal Theater and the Teatro de la Zarzuela, and uncertainty that has been created in the world of opera and fans, just wait the outcome in next dates. Feelings among the public and criticism are of concern and a certain uneasiness. Hopefully it will not jeopardize the good work that the current direction of Teatro de la Zarzuela, Daniel Bianco to the head, It is carrying out since his appointment in 2015, placing value on our lyrical genre and placing it in the XXI century.