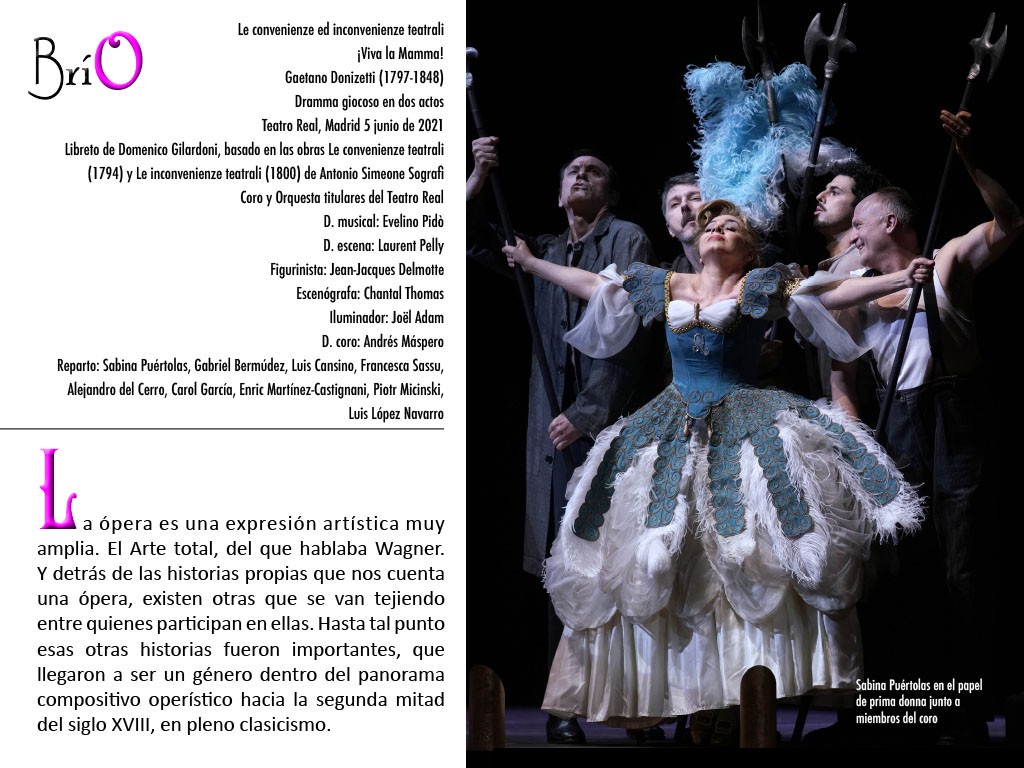 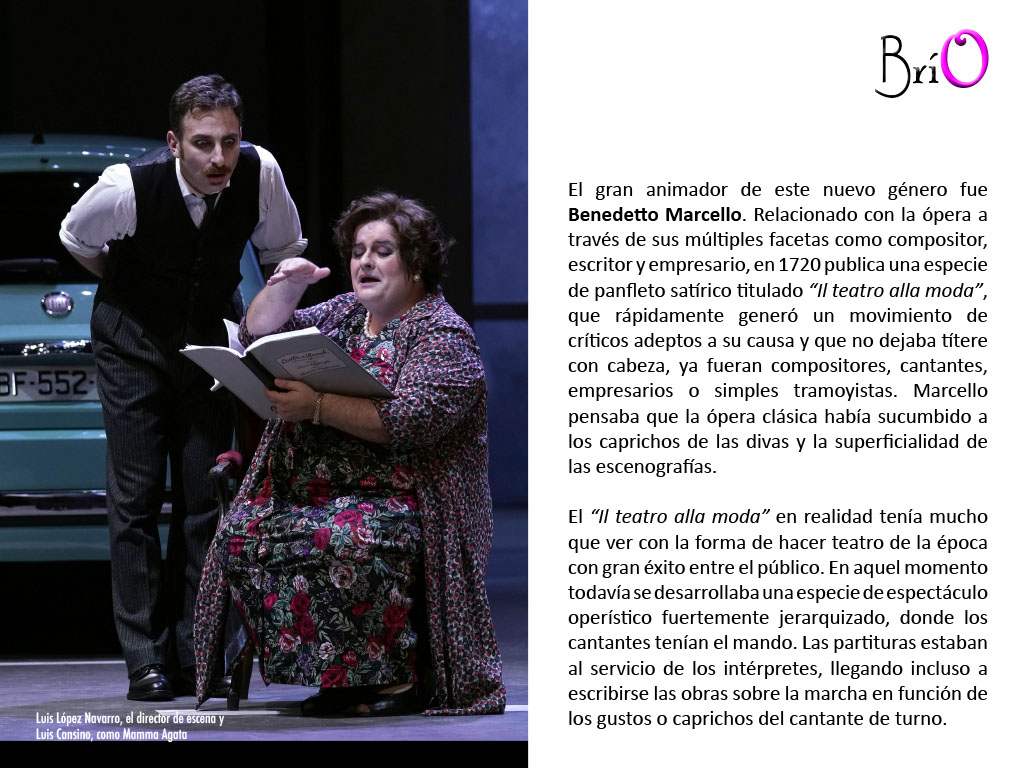 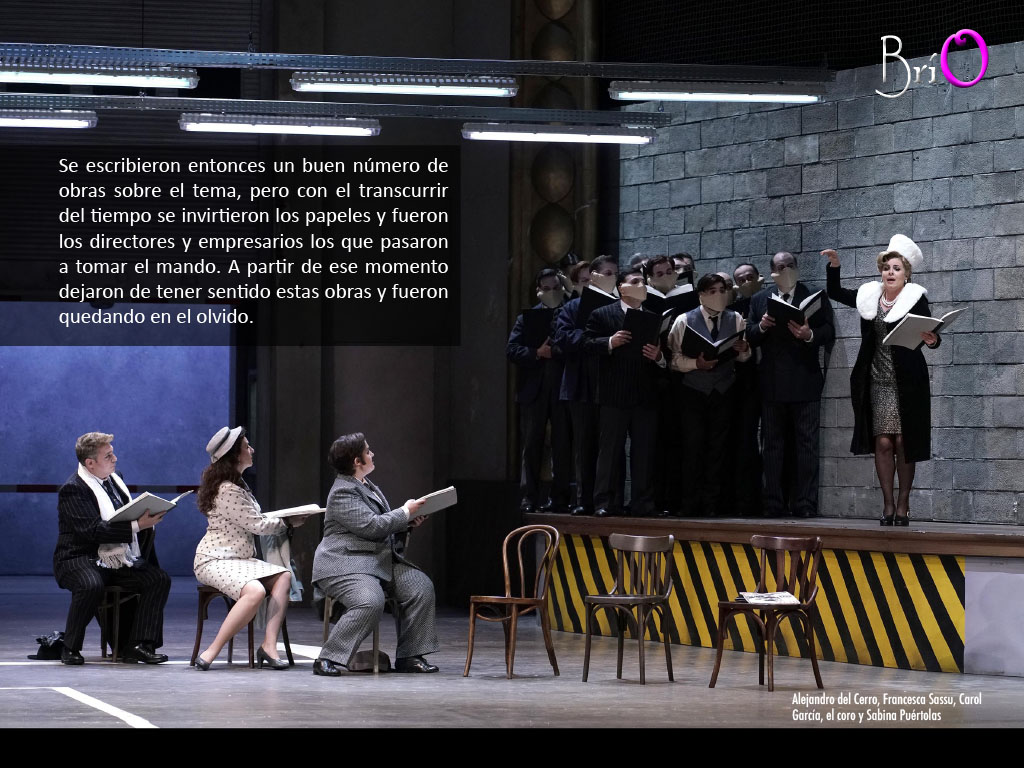 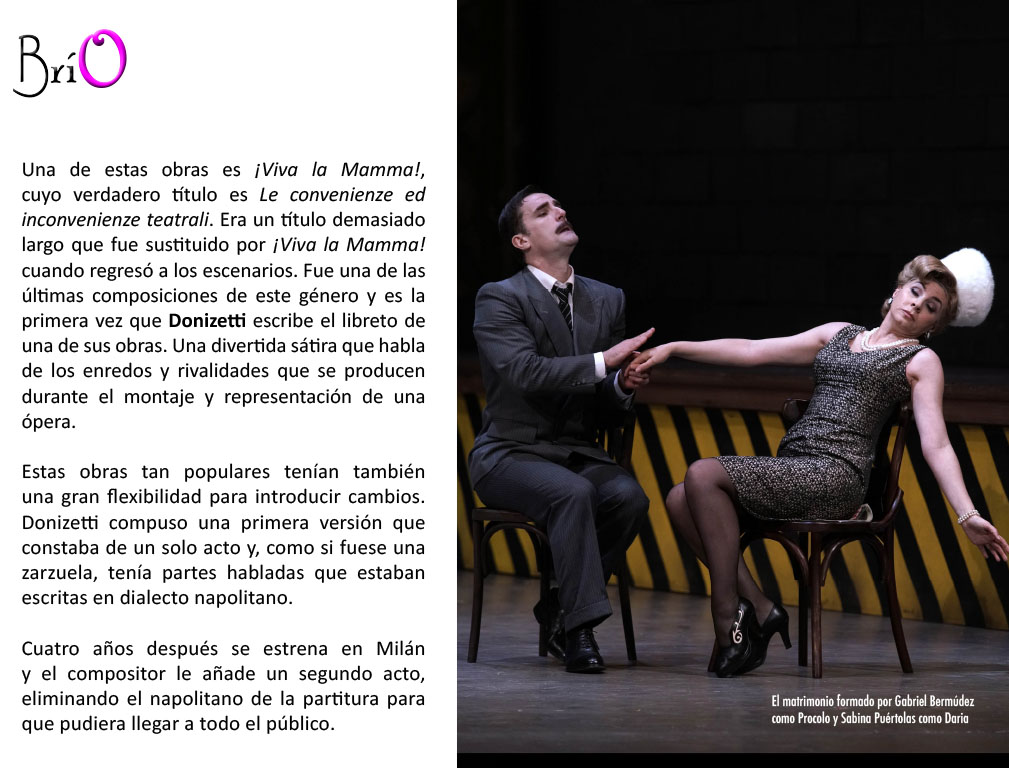 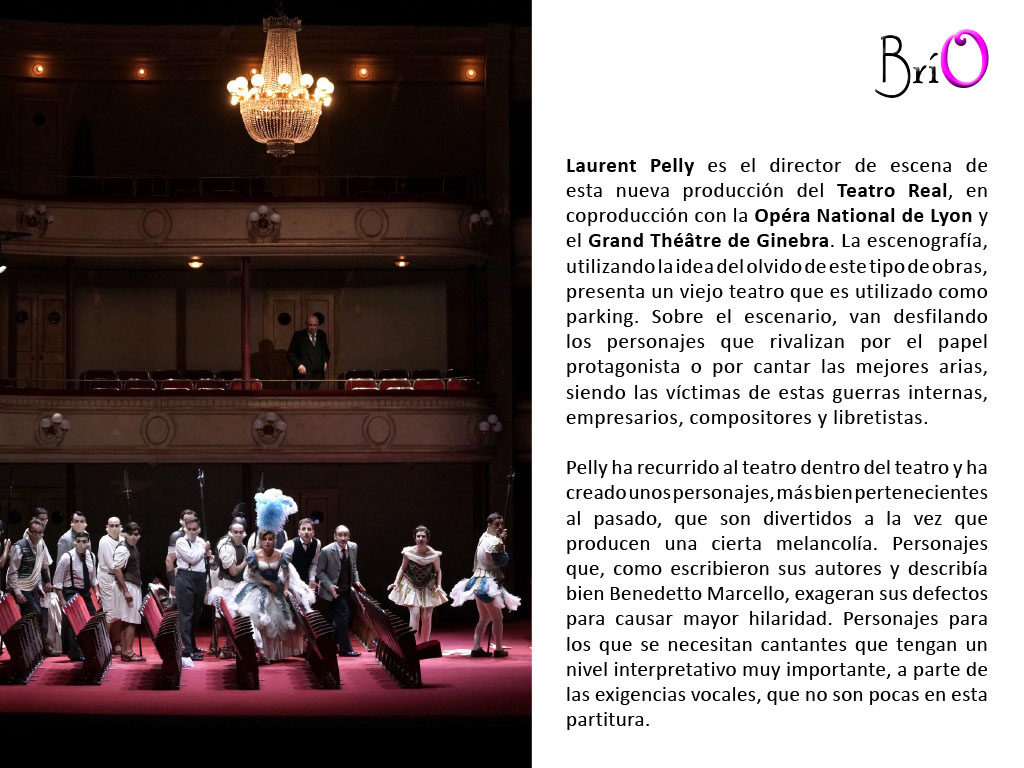 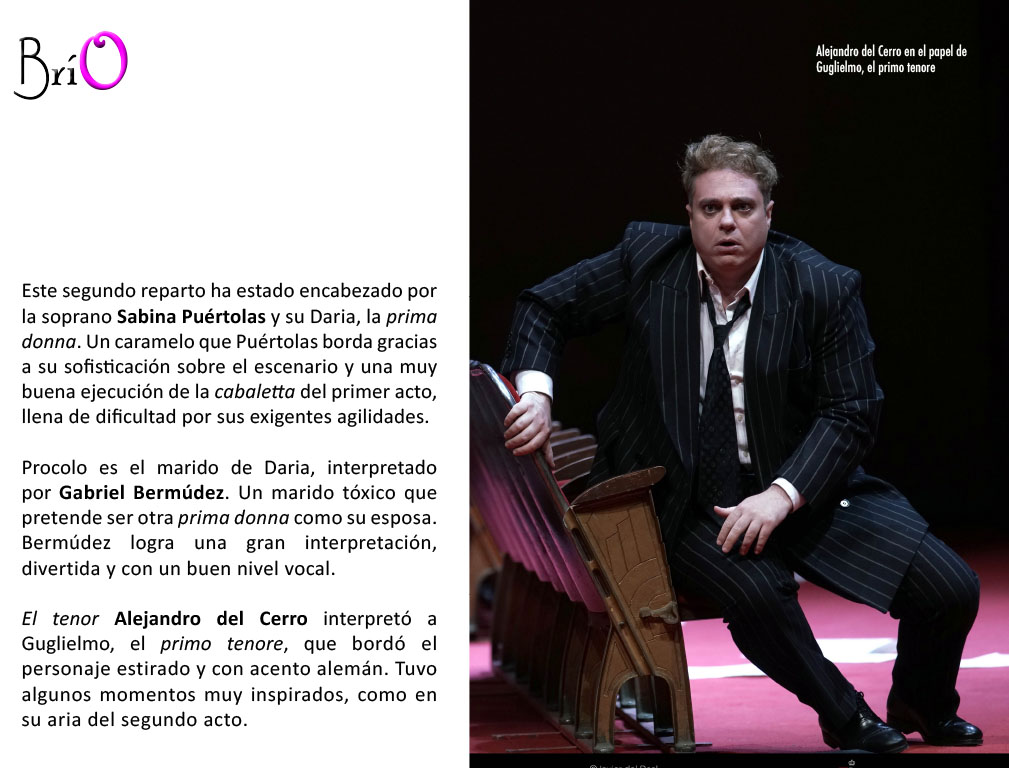 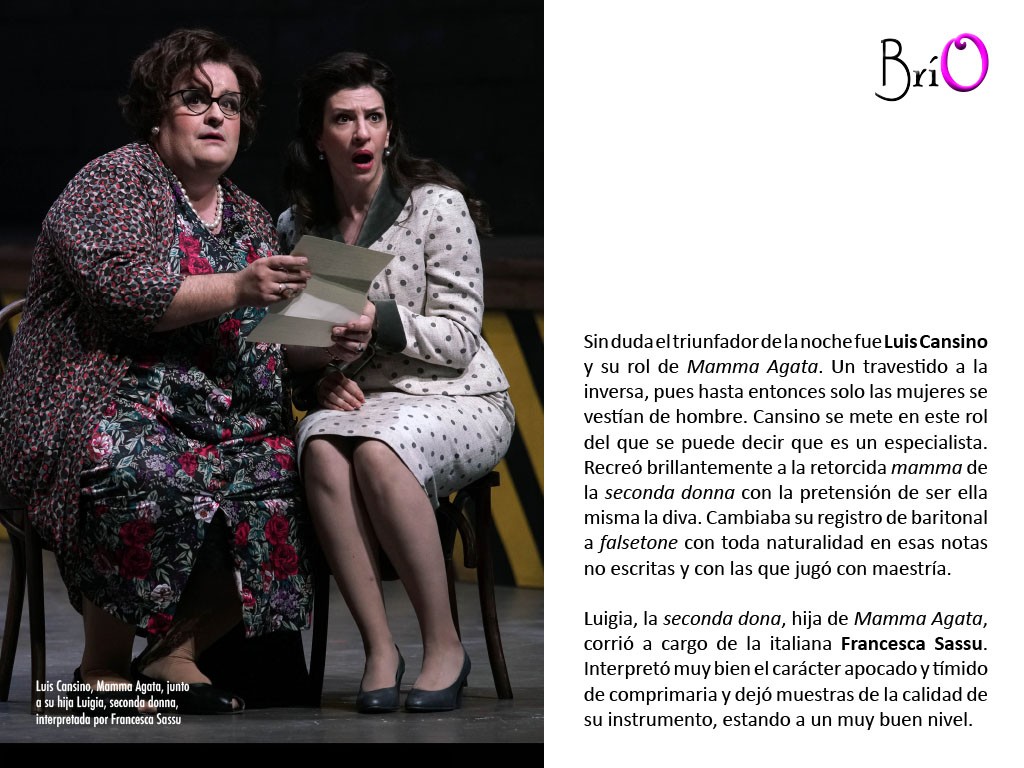 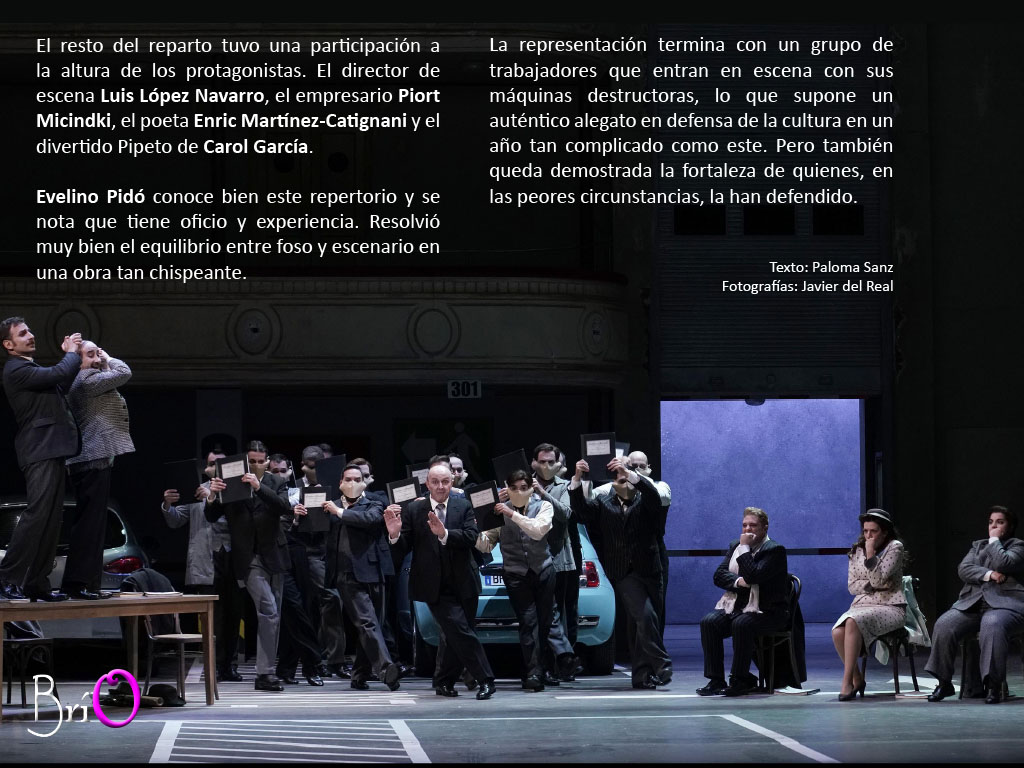 The theatrical conveniences and inconveniences
Viva la Mamma!
Gaetano Donizetti (1797-1848)
Playful drama en dos actos
Teatro Real, Madrid 5 June of 2021
Libreto by Domenico Gilardoni, based on the works Le convenienze teatrali
(1794) y The theatrical inconveniences (1800) by Antonio Simeone Sografi
Choir and Orchestra of the Teatro Real holders
D. musical: Evelino pido
D. scene: Laurent Pelly
Costume designer: Jean-Jacques Delmotte
scenographer: Chantal Thomas
illuminator: Joel Adam
D. choir: Andrés Máspero
Distribution: Sabina Puértolas, Gabriel Bermúdez, Luis Cansino, Francesca Sassu,
Alejandro del Cerro, Carol Garcia, Enric Martínez-Castignani, Piotr Micinski,
Luis López Navarro Opera is a very broad artistic expression. Total Art, Wagner was talking about. And behind the own stories that an opera tells us, there are others that are being woven between those who participate in them. To such an extent those other stories were important, that became a genre within the operatic compositional panorama towards the second half of the 18th century, in full classicism. The great animator of this new genre was Benedetto Marcello. Related to opera through its many facets as a composer, writer and businessman, in 1720 publishes a kind of satirical pamphlet entitled "Il teatro alla moda", that quickly generated a movement of critics adept at his cause and that did not leave a puppet with a head, they were already composers, singers, businessmen or simple stagehands. Marcello thought that classical opera had succumbed to the whims of the divas and the superficiality of the scenography.

The "Il teatro alla moda" actually had a lot to do with the way of doing theater at the time with great success among the public.. At that time, a kind of highly hierarchical operatic show was still taking place., where the singers had the command. The scores were at the service of the interpreters, even getting to write the works on the fly depending on the tastes or whims of the singer on duty.

A good number of works were then written on the subject, But with the passage of time the roles were reversed and it was the directors and entrepreneurs who came to take command. From that moment on, these works stopped making sense and were being forgotten..

One of these works is ¡Viva la Mamma!, whose real title is Le convenienze ed inconvenienze teatrali. It was too long a title that was replaced by ¡Viva la Mamma! when he returned to the stage. It was one of the last compositions of this genre and it is the first time that Donizetti wrote the libretto for one of his works.. A funny satire that talks about the entanglements and rivalries that occur during the staging and performance of an opera.

These popular works also had great flexibility in making changes.. Donizetti composed a first version consisting of a single act and, as if it were a zarzuela, had spoken parts that were written in Neapolitan dialect.

Four years later it opens in Milan and the composer adds a second act, removing the Neapolitan from the score so that it could reach the entire audience.

Laurent Pelly is the stage director of this new production of the Teatro Real, in co-production with the Opéra National de Lyon and the Grand Théâtre de Geneva. scenography, using the idea of ​​forgetting this type of work, presents an old theater that is used as a parking lot. On stage, The characters that compete for the title role or to sing the best arias are parading, being the victims of these internal wars, businessmen, composers and librettists.

Pelly has turned to the theater within the theater and has created some characters, rather belonging to the past, that are fun while producing a certain melancholy. characters, as its authors wrote and Benedetto Marcello described well, they exaggerate their flaws to cause more hilarity. Characters for which singers who have a very important interpretive level are needed, apart from the vocal demands, that are not few in this score.

This second cast has been led by the soprano Sabina Puértolas and her Daria, the first woman. A candy that Puértolas embroiders thanks to its sophistication on stage and a very good execution of the first act cabaletta, full of difficulty due to its demanding agility.

Procolo is Daria's husband, played by Gabriel Bermúdez. A toxic husband pretending to be another prima donna like his wife. Bermúdez achieves a great performance, fun and with a good vocal level.

The tenor Alejandro del Cerro played Guglielmo, el first tenor, that embroidered the character stretched out and with a German accent. Had some very inspired moments, as in his aria from the second act.

Without a doubt, the winner of the night was Luis Cansino and his role as Mamma Agata. A transvestite in reverse, because until then only women dressed as men. Cansino gets into this role that can be said to be a specialist. She brilliantly recreated the twisted mamma de la seconda donna pretending to be the diva herself. He changed his register from baritonal to falsetone quite naturally in those unwritten notes and with which he played with mastery..

Luigia, the second gives, hija de Mamma Agata, was in charge of the Italian Francesca Sassu. He interpreted the timid and timid character of compresaria very well and showed the quality of his instrument., being at a very good level.

The rest of the cast had a participation at the height of the protagonists. Stage director Luis López Navarro, businessman Piort Micindki, the poet Enric Martínez-Catignani and the funny Pipeto by Carol García.

Evelino Pidó knows this repertoire well and it shows that he has a trade and experience. He solved the balance between pit and stage very well in such a sparkling play.

The performance ends with a group of workers entering the scene with their destructive machines., which is a true plea in defense of culture in a year as complicated as this. But the strength of those who, in the worst circumstances, they have defended it.