Werther by Jules Massenet at the Palau Arts 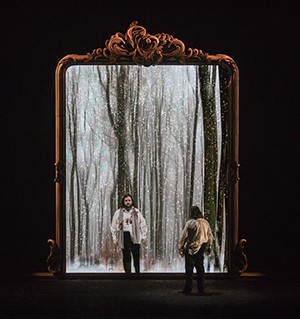 Werther has been represented for the first time at the Palau de les Arst in Valencia, in the course of five performances. Orchestra of Valencia, superbly directed by the Hungarian Henrik Nánási, It has been the big winner. The results in both the vocal level and stage have been more discreet.

During a trip that the composer together with his editor Georges Hartmann made to Bayreuth, in 1886, to listen Parsifal, had the opportunity to visit the town of Wetzlar near Frankfurt, where Goethe had written his work. Is, since then, when Massenet begins the composition of Werther, with a script of Edouard blau, Paul Thousands Y Georges Harmant, who adapt Goethe's work, giving much more relevance to the character of Charlotte, the woman idealized by Werther, for which he feels an uncontrollable love passion. Upon completion of composition in June 1887, Massenet offered it at La Opera-Comique in Paris, whose director Leon Carvalho rejected it, considering that the argument was too sad to interest the public.

Finally, the opera translated into German, premiered with great success at the Vienna Hofoper Theater he 16 February 1892. The French version was premiered at the Geneva Opera on 27 December 1892 and the 16 of January of 1893 the premiere took place at the Opera-Comique in Paris, where it was praised by critics although received with reluctance by the public.

The opera was widely accepted in major theaters around the world. During the first half of the twentieth century, was performed with some regularity in France and more intermittently in the rest of the world, highlighting the extraordinary creation of Werther performed by the great French tenor Georges Thill, next to the magnificent soprano Charlotte Ninon Vallin, that can be heard on the record recording of 1931, directed by Elie Cohen in front of the Orchestra of La Ópera-Comique, remastered on CD by EMI in 1989 and even better sound by NAXOS in 2000.

Eighty-six years have passed and that recording of Werther continues to be a true reference. The Italian version of Werther had as its main protagonist Tito Schipa, who has already performed it at Liceu de Barcelona, in December 1918, and kept in his repertoire for three decades, there are many recordings of the famous aria from Act III "Why wake me" in Italian "Ah! Don't awaken me"And also from the aria of Act I"Come on, it's good here ... O Nature" in Italian "Allor sta propio too… ..O natura”And a selection of the opera with the Charlotte de la mezzo Gianna Pederzini recorded in 1940. Schipa was the model for other Italian tenors such as Giuseppe Di Stefano, Weather in Ferruccio Tagliavini, Cesare Valletti and Carlo Bergonzi who performed this opera on specific occasions during the fifties and sixties of the last century.

But nevertheless, the authentic resurgence of Werther came about when the great Alfredo Kraus incorporated it into his repertoire, in January 1966, at Municipal Theater of Piazenza, sung in italian; although soon the Canarian tenor will interpret the French version, whose first testimony is the live shot made in Madrid Zarzuela Theater in 1969, where Kraus shared a cast with the exquisite Charlotte from Los Angeles Victoria, who that same year had participated in a magnificent record version made by EMI, next to the excellent Werther of the great Swedish tenor Nicolaï Gedda, led splendidly by Georges Prêtre, conducting the Orchestra of the Paris Opera. Alfredo Kraus played Werther for thirty years, in innumerable performances by all the great theaters of the world, sharing deals with gorgeous Charlotte, between them: Tatiana Trojans, Teresa Berganza, Elena Obraztsova, Regine Crespin, Frederica von Stade o Martha Senn.

Numerous live shots in both audio and video, credit the extraordinary interpretation that Alfredo Kraus made of Werther, there is also a referential record recording, with excellent sound, conducted in study by EMI, in 1979, with orchestral direction by Michel Plasson conducting the London Philharmonic Orchestra, where Kraus shared a cast with the excellent Charlotte de la mezzo Tatiana Trojans. He Werther by Alfredo Kraus, synthesizes the aristocratic style of Georges Thill with the colorful vocal of Tito Schipa. After Kraus, the interpretations made by Roberto Alagna Y Jonas Kaufmann. French tenor Jean Francois Borras, who has interpreted Werther at the El Palau de Les Arts functions, had his big opportunity by replacing an unwell Jonas Kaufmann, during a performance of Werther, in 2014, in the Metropolitan New York, This marked his debut in this role that he has played with some frequency in recent years.

He Werther represented in the Valencian Palau de Les Arts, is a co-production of this Theater and the Monte Carlo Opera, stage direction of Jean Louis Grinda, and scenery of Rudy Sabounghi, With the presence, from the very beginning of the Opera of a large mirror where a Werther in a bloody shirt is reflected. Suddenly the mirror breaks, it is crossed by the protagonist and his chopped molding moves to the ends of the stage, recomposing himself at different times: the beautiful scene from "Moonlight" in Act I and throughout Act IV, with which the representation ends.

The story is shown by way of a long flach-back, starting from the end, where Werther contemplate the tragic unfolding of your life in the past six months, which constitute the period of time between his own death and the moment when he is attracted to his feminine ideal represented by Charlotte. The way of telling the story is interesting, although it is somewhat unsuccessful, since this typically cinematic narrative procedure (recalls the one used by Billy Wilder in his famous movies: Bane and Twilight of the Gods) requires the continuous stage presence of the protagonist, something that does not happen in Werther.

He stage that appears in the first two acts is the garden of the house where Charlotte lives and in the background a forest of green colors at the beginning of the summer where Act I takes place, that drifts to the ocher tones of autumn during Act II. The Act III setting, it is very conventional, with a great room in Charlotte's matrimonial home, whose main elements are a harpsichord, and an illuminated display case containing a collection of pistols. The scenery only becomes relevant at the beginning of Act IV, with a projection where the frontal figure of Charlotte can be seen, with a disjointed face, within the reconstructed frame of that great mirror, running through the snow to Werther's house.

Little successful that presence of heavenly angels, with their corresponding wings, that appear surrounding Werther and Charlotte at the end of the opera. Nor does the lighting manage to enhance the simple scenery..

In an opera like Werther, where the orchestral framework is fundamental always embedded in the dramatic action: The Orquesta de Valencia was the great winner of these representations, splendidly directed by the Hungarian Henrik Nánási, who managed to extract from all the orchestral sections, expressive sounds, that are already evident in the execution of the initial overture with moments of great dramatic tension in the execution of that recurring musical theme, that translates the passion that Werther feels for Charlotte and that connects with the bucolic chords that show that other recurring theme of nature, with brilliant solo interventions of the concertmaster violin.

The orchestral sound was truly sublime in the performance of “El Claro de Luna” in Act I, which becomes the essential musical theme of the opera, and where the sound of the cellos stood out.

Magnificent orchestral response throughout Act III, in the accompaniment of Charlotte's arias, with special reference to the interventions of the sax, in the second aria "will! Let my tears flow!”And also the interventions of the cellos and the harp in the famous aria of Werther “Why wake me”. Highlight the great orchestral performance of the Act IV overture, which is subtitled "The Christmas night”. Superb rendering of the English horn enhancing passages with the most dramatic tension. Excellent sound of metals, especially horns. Highlight the organ solo as the concluding coda of the duo of Charlotte and Albert in Act II. One could only reproach an excessive volume of the orchestral sound, what, sometime, covered up the voices.

Werther It is an opera of true brilliance for the two protagonists through numerous arias and arioses, together with four great duos. In his portrayal of Werther, the french tenor Jean Louis Borrás, showed idiomatic and stylistic adequacy, with a lyrical voice with a beautiful timbre and acceptable volume, although somewhat light and that only acquires resounding dimensions in the high register. In his speeches, a greater variety of accents was missing, that will give their song authentic expressiveness. He made a remarkable interpretation full of melancholy in that song to nature that constitutes the recitative-aria "So, it's good here ...... Ô nature, gracious"Act I. Ya, in Act II, showed in his aria "Another is her husband!”That degree of frustration that it produces to see Charlotte already married to Albert.

Borrás offered his best moments in the famous aria “Why wake me”Inserted in the great duet of Act III with Charlotte, played by the mezzo Anna Caterina Antonacci, who shows his great quality as an interpreter by fully penetrating the psychology of the character, although with a rather worn voice, with an important vibrato in all registers, low volume and virtually inaudible bass range. These shortcomings are evident in his dramatic Act III interventions: the aria of the letters "Werther! Werther ... who would have told me instead”Acceptably resolved, and showing real problems in "will! Let my tears flow!” so demanding in the grave register.

Show a nuanced line of singing in the beautiful duet with Werther from “Claro de Luna” in Act I, compared to the flatter interpretation of Jean François Borras. Antonacci is also notable in the final duet with Werther, where Borrás abused the fluffed notes, with loss of tuning in some of them.

Very well Sophie's Helena Orcoyen, a light voice with a penetrating and well projected timbre, that shines in his recitative-aria of Act I "Brother, see the bouquet .... of the cheerful sun, full of flame”, where he shows a youthful joy linking the phrases well and offering magnificent treble. Also highlights his performance in the duet with Charlotte "Hello, big sister!” Act III, where her joy and carefreeness contrasts with the sadness of her downcast sister.

Very discreet interpretation of the bass-baritone Michael Borth, as Albert, showing real limitations in a demanding role, especially in the aria "She loves me, she thought of me"From Act I or in the duet with Charlotte" Trois mois! Three months ago ”del Acto II, where his vocal and interpretive deficiencies are revealed.

Acceptable interpretation of Alejandro López como Le Bailli (Charlotte's father magistrate). Exaggerated characterization of Moses Marin Y Jorge Lopez respectively playing drunkards Schmidt and Johann, with a remarkable interpretation of his duet “Vivat Bacchus, always live”At the start of Act II, that is usually cut, but what if it is included in this production.

Good performances from the children of La Choir of Our Lady of the Abandoned and of the girls of The Quarter Poblet Voices Together Choral School.