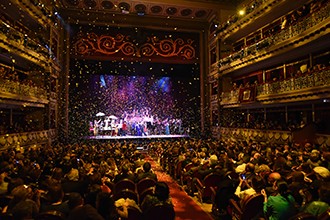 Last 19 March was held in Oviedo the Gala of delivery of the Campoamor Awards. This year with a special celebration because they are already 10 which have been held.

To approach the true dimension of these awards must be taken into account, at least, two premises. The first, Lyrical award shows. And the second, We are in Spain. These two conditions could be contradictory, but the importance that these Campoamor Awards and the Spanish lyrical tradition are reaching, should be enough for some to consider placing them where they belong, among the great Galas and Awards of other artistic disciplines that take place in our country.

This year the stage director has been in charge of Joan Font, director of comedians, what with the circus, as a common thread, filled the stage and the Campoamor hall with magic.

The Gala had two masters of ceremony, soprano Silvia Vázquez and baritone Maybe Borja, who unfolded on stage with friendly ease, interspersing arias with the presentation of the winners. Surprises in the form of magic and stunts came with Raúl Rodríguez Alegria, Albert Ubach Y Raquel Ferri.

In the upper part of the stage a kitchen had been placed in which the pastry chef Jacinto Rama and his assistant made the cake for the gala's tenth birthday. Cake that would be distributed to the public at the end of the act.

With all these elements, lyric, kitchen, magic and circus, a gala began to take place that only in some moments was a little slow, but in which brilliance and the winners were the protagonists.

The award for the revelation singer went to the Aragonese soprano Ruth Iniesta, that he risked with an aria by Mignon, from Thomas.

The award ceremony for a new production of Spanish opera or zarzuela followed, for "The terrible Pérez", from Tomas Lopez Torregrosa Y Joaquín Valverde (son). The award was collected by the teacher Antón García Abril.

The Contribution to the World of Lyric Award and Special Jury Prize carried a great depth of depth, because it was awarded to Villamarta theater from Jerez, that is experiencing serious difficulties due to budgetary and political vagaries. And it's not the only one, just remember what happens to the Opera in La Coruña.

There were also some absences. They did not attend Laurent Pelly, award for best stage director, ni Michel Plasson, Award for the best musical direction. The latter having suffered an accident these days. The American did not attend either Joyce Didonato, award for female opera singer, but he did send a thank you video.

The sympathy was put by the Award to the Spanish opera singer, the german Nicola Beller Carbone, who appeared down the central aisle interpreting the drunkenness of La Périchole, from Offenbach. Changing registration immediately to offer us an aria of Ariadne auf Naxos, From Strauss.

The excitement and intensity came with Gregory customer, Best Male Opera Singer Award. This American, which we frequently enjoy in our country, a "Dress the jacket" of the Pagliacci from Leoncavallo that put goose bumps.

The other big surprise of the night was the presence of the Welsh bass-baritone Bryan Terfel. He arrived just a few minutes before going on stage to collect his prize and give us two pieces, a lied and a Welsh folk song that made us all long for their land.

Another emotional moment was the delivery of the Special Award to an entire career to the great Fiorenza Cossotto, what was, by the way, the only one who had the opportunity to address the public and thank her award. This last award gave way to a tremendous finale. All the winners on stage singing the "toast" of the Traviata.

At the exit a music band and the lights of a festival offered zarzuela and pasodobles to accompany the exit of the theater. It was raining and it was cold, but a participatory public and a city with the experience of knowing how to do important things very well, They made it clear that the lyric in Spain is in our cultural roots and when it is offered with quality and generosity to the public, acquires its true socio-cultural dimension.
Text: Paloma Sanz
Photograph: I. Martínez/ D. Arienza
Video: TPA (Television of the Principality of Asturias)