Xavier Sabata in the footsteps of Alexander the Great 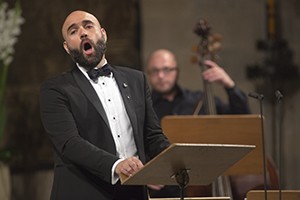 Two years ago there was the debut Peralada from Xavier Sabata (Avia, Barcelona, 1976), who scored a big win with the concert was entitled "Furioso or the footsteps of Orlando". His return to Peralada, He has been one of the greatest attractions in the programming of the thirty edition of the festival ampurdanés. Countertenor Barcelona showed again his musicological concerns, to develop a program around the figure of Alexander the Great, through different titles Baroque operatic repertoire, that its thematic focus on the figure of the great Greek conqueror. With the title "Alexander the Great, the man who conquered the world " The concert took place in the church of Carmen de Peralada, last 7 of August, where Xavier Sabata, He was accompanied by a chamber orchestra with members of the Polish side Capella Krakow, formed by violinists Zofia Wojniakiewick Y Thomas mountain beside the viola Mariusz Grochowski, cellist Agnieszka Oszańca, bass Zenon Skiba and oboes Taka Kitazato Y Alayne Leslie, all they led by Tomasz Adamus also in charge of the harpsichord. The merit of Xavier Sabata is recuperating a series of baroque operas that had not again been heard from the dates of their respective premieres haughtiness d'Alessandro (1690) from Alessandro Steffani. Abdolomino (1711) Y The Euleo festeggiante in return of Alexander the Great from indie (1699) from Giovanni Battista Bononcini. Alexander the Great in Sidon (1706) from Francesco Mancini. Alessandro nell'Indie (1732) from Giovanni Battista Pescetti. Alexander and Porus (1744) from Carl Heinrich Graun. Alessandro nell'Indie (1729) from Leonardo Vinci Y Alessandro in Persia (1741) from Leonardo Leo.

The program also included two operas pages best known and represented: Poro (1731) Y Alessandro (1726) both of georg Friedrich Handel. The concert began with individual orchestral pages well interpreted by the Capella Cracoviensis, belonging to the operas The pride of Alexander Steffani and Alessandro Abdolomino Giovanni Battista Bononcini, and another opera by the same author with the long title The Euleo festeggiante in the return of Alexander from indie, which it included two arias with the performance of Xavier Sabata started: in the first one "From your lights", a de bravura air with típica estructura again, the singer showed his technical mastery of coloratura with a range of serious fine issued; Y, as opposed, the second "Clear torches" clearly intimate character, where Sabata showed a fine singing full melodismo, with the sole accompaniment of cello, that make this page a real regret. In the same vein intensely melodic, the beautiful aria falls "Saving a great" Opera Alessandro nell'Indie de Giovanni Battista Pescetti, a beautiful orchestral introduction, where the singer showed his mastery of complex executions linked milismas, to conclude his performance in piano trill included. The first part of the concert ended with the interpretation of another bravura aria "Spirits proud to revenge" Opera Alexander the Great in Sidon de Francesco Manzini, whose first section, Xavier Sabata was a song full of fury notes issued dizzily, as well as its great theatrical capacity, even to face the passing score violently its pages. 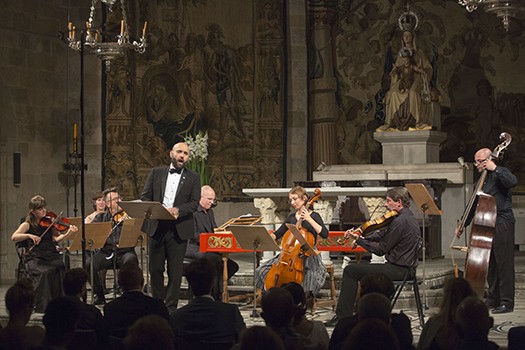 Interpreted by the Capella Cracoviensis the andante of the symphony belonging to the opera Alexander and Porus de Carl Heinrich Graun, He marked the beginning of the second part of the concert, Xavier Sabata giving way to face the aria "Servati to large enterprise" with the same text and title of opera Alessandro nell'Indie but another author Leonardo Vinci, where, again, the singer showed his stylistic mastery and great ability to solve the most difficult agilities a highly ornate page, also showing his elegant phrasing and gorgeous legato. Next in "They can both two lights" Opera Poro Handel, started with a brilliant orchestral introduction, Sabata again offered a line of song that highlighted the intimate and melancholic tone of the Aryan, to conclude widening the voice and giving his interpretation of strong drama. El Air "To Tell, ben mio, I would like to "de Alessandro in Persia Leonardo Leo, it becomes a truly loving statement Alejandro her lover, with phrases such intimate and suggestive character "I love that, that adore, But I can not say " sung by Sabata with great style and authentic passion. The concert concluded with the interpretation of bravura aria "Love compartment" belonging to the opera Alessandro Handel, where the singer again showed his excellent technique to cope with complex coloratura, with passages executed at high speed, showing a wide fiato for the execution of lengthy melisma and perfect octave leaps, with a mastery of all records and contributing to its interpretation a high degree of theatricality.

Before the continuous applause of an ecstatic audience, Xavier Sabata performed two arias from Handel operas paths: "Early Rome and the early tè" of Scipione Y "Vibra courtly love " from Alessandro. In the first, with alternating fast and slow passages, with repeated repetition of the phrase's title aria, made with different intonations, where the singer again proved his performance art. In the second, Sabata returned to delight us with the intimate singing and great delicacy and offered at different times during this concert. Capella good performances of the Symphony Cracoviensis belonging to the opera Alexander the Great in Sidon from Francesco Mancini, where the violins are dialogues gorgeous with severe rope, joined by the sound of the key. particularly bright moment in the performance of the Polish Chamber Orchestra, It was the interpretation of the overture of the opera Händel Alexander’s Feast. Good performance Jan Tomasz Adamus both his directorial work as interpreter at the harpsichord.

In sum, a concert of true height, showing again, the great capacity of Xavier Sabata when developing attractive thematic programs, with its excellent quality as a singer, and also, as an accomplished actor capable of establishing a high degree of communication with the public.